It’s 2016, and nothing says “get out the vote” like a Snapchat filter. Or that’s what Bernie Sanders is thinking. Or at least that’s what his social-media intern is thinking.

The Democratic presidential candidate has his own Snapchat geofilter today, in honor of New York’s Democratic primary. It reads “VOTE BERNIE TODAY” and features a tiny, animated Sanders grinning toothily and standing shoulder to shoulder with Lady Liberty. (“Geofilters” are overlays and filters you can place on Snapchats only in a specific geographical area.) 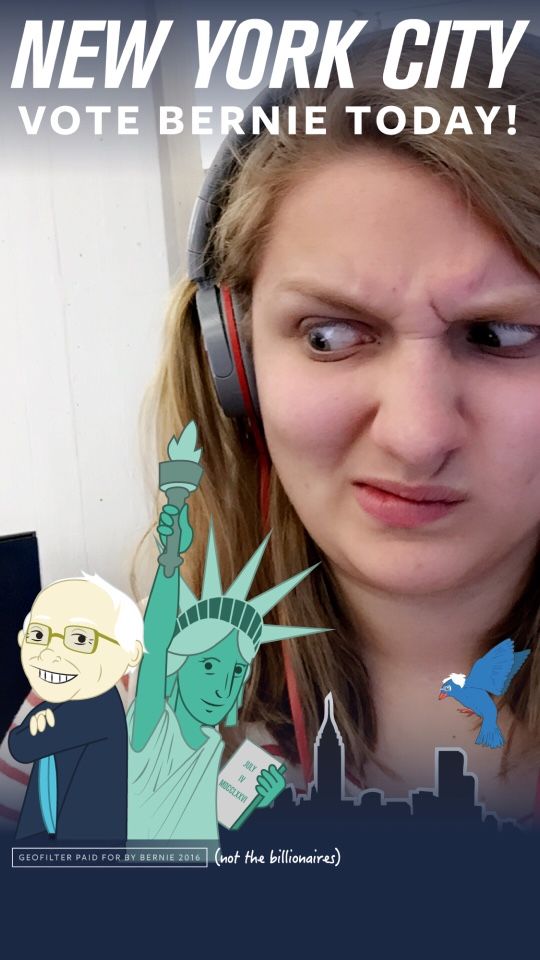 But not everybody is feeling the … you know.

Are you kidding!? There's only a vote Bernie snapchat filter!? Can we not with the liberal bias wtf I'm enraged

Let’s be direct here. This isn’t a Snapchat issue. Anybody can purchase a sponsored filter. That means Bernie Sanders, Hillary Clinton, Donald Trump, Ralph Nader, Dan Smith, Dr. Zizmor, and the guy who walks around with his cat on his head. Anybody. Bernie Sanders has a Snapchat filter because Bernie Sanders paid for a Snapchat filter. (Bernie, not the billionaires, as the filter makes very clear.) Hillary has only herself to blame.

Appalled that Bernie has a Snapchat filter in NY but Hillary doesn't. 😥

It’s not as crazy (or stupid) as it sounds: Snapchat’s VP of content Nick Bell recently said that two-thirds of Snapchatters are over 18, Tech Insider reports. Combine that with Snapchat’s 100 million daily users, divide by the number of users currently living in New York, and then divide again by the number who are registered Democrats, and Sanders is definitely looking at, at least, a dozen eligible voters.

People Are Mad About This Bernie Snapchat Filter

THE FEED
2:48 a.m.
covid-19
covid-19
What We Do and Don’t Know About the Omicron (B.1.1.529) Variant
By Chas Danner
Scientists say the variant, which has been spreading in southern Africa, has a worrisome number of mutations — but more research is needed.
11/26/2021
first person
first person
Frank Rich on His Friendship With Stephen Sondheim
By Frank Rich
A lifetime making sense of the extraordinary songwriter — as young fan; critic and “enemy”; and, by now, old friend.
11/26/2021
2022 midterms
2022 midterms
Republicans Can’t Bet on Finding Perfectly Trumpy Candidates
By Ed Kilgore
The GOP thinks candidates who embrace Trump without going full MAGA are the key to winning the midterms. Good luck finding them.

11/26/2021
politics
politics
Merrick Garland Gets Political, Whether He Likes It or Not
By Ankush Khardori
Hated by the right and distrusted by the left, the attorney general is in a perilous position of his own making.
11/25/2021
past is prologue
past is prologue
Cheer Up, Democrats! You’ve Had It Worse Than This.
By Ed Kilgore
The Democratic Party has a lot of problems, but it’s faced similarly sticky situations before and survived.
11/24/2021
politics
politics
For Pete’s Sake, Stop the Presidential Buzz About Buttigieg
By Ed Kilgore
The secretary of Transportation has plenty of fish to fry without constant speculation that antagonizes Kamala Harris supporters to no good end.
11/24/2021
election 2022
election 2022
How Is Paperboy Love Prince Possibly Running for Congress in 11 Districts?
By Valeria Ricciulli
The former mayoral candidate can run, but getting on the ballot on all the districts may be a challenge.
11/24/2021
ahmaud arbery
ahmaud arbery
The Legal Uses of Blackness
By Zak Cheney-Rice
Why attorneys in the Ahmaud Arbery case did — and didn’t— invoke his race.
11/24/2021
black lives matter
black lives matter
Jury Convicts All Three Men Accused of Murdering Ahmaud Arbery
By Justin Miller
Three white men chased a Black man through their neighborhood and killed him, in what has been likened to a modern-day lynching.
11/24/2021
wirecutter
wirecutter
Here’s the Best Strike for Most People
By Choire Sicha
The Wirecutter stops typing.
11/24/2021
self-censorship
self-censorship
Jamie Dimon Quickly Backtracks on Mild China Joke
By Benjamin Hart
He needs to stay on the country’s good side, and Xi Jinping isn’t known for his sense of humor.
11/24/2021
politics
politics
‘I Want to Be a 21st-Century Trustbuster’: Zephyr Teachout on Her Run for A.G.
By Nia Prater
The progressive law professor who challenged Cuomo for governor explains why she’s back with a second shot for attorney general.
11/24/2021
the republican party
the republican party
Is the GOP’s Policy Agenda Hidden or Nonexistent?
By Eric Levitz
For a party that may soon have full control of government, its ambitions remain remarkably unclear.
11/24/2021
pivot
pivot
Super-Apps Are Inevitable
By Scott Galloway
Get ready for the first $10 trillion tech company.
11/24/2021
qanon
qanon
‘Michael Always Says There’s No Coincidences’
By Matt Stieb
A demolition contractor turned numerology guru fills the void at the heart of QAnon, bringing his followers to Dealey Plaza to revive the Kennedys.
11/23/2021
the money game
the money game
There’s a New Crypto Land Grab Going On
By Kevin T. Dugan
A lot of people are suddenly betting that, in the metaverse, .eth addresses will be the new .com. So what is amazon.eth worth?
11/23/2021
charlottesville
charlottesville
Unite the Right Organizers Ordered to Pay $26 Million in Damages
By Matt Stieb
The payment comes following a civil lawsuit in which the defendants, including Richard Spencer, were found guilty on a state conspiracy claim.
11/23/2021
crime
crime
Deadly Waukesha, Wisconsin, Christmas-Parade Tragedy: What We Know
By Intelligencer Staff
A driver faces murder charges after killing six people and injuring over 60 while fleeing a domestic dispute.
11/23/2021
thanksgiving
thanksgiving
I’m Thankful for the End of Guides to Arguing With Trumpy Relatives
By Margaret Hartmann
Since 2016, I’ve been subjected to pieces that insisted the battle for the soul of America was being waged at my Thanksgiving table. Good riddance.
11/23/2021
return to office
return to office
Your Boss Misses You
By Choire Sicha
Let’s all office together.
11/23/2021
sports
sports
Women’s Tennis Had to Stand Up to China
By Caira Conner
Other sports could get away without direct confrontation. Peng Shuai feels like a turning point.
11/23/2021
2022 midterms
2022 midterms
Louie Gohmert Joins Wild Texas Attorney General Race
By Ed Kilgore
The MAGA representative will challenge Trump-endorsed Ken Paxton and George P. Bush in a race that shows the importance of state offices.
11/23/2021
the law
the law
The End of the Viability Line
By Irin Carmon
If the Supreme Court lets Mississippi ban abortion at 15 weeks, before fetal viability, much more than that will be lost.
11/23/2021
the national interest
the national interest
Chris Christie and the Death of the Never Trump Republican
By Jonathan Chait
“The line of supporting Donald Trump starts behind me!”
11/23/2021
hizzoner
hizzoner
Eric Adams Flies Air Crypto
By Benjamin Hart
Politico reports the next mayor traveled to Puerto Rico with the controversial billionaire Brock Pierce, who is advising him on crypto.