It’s tempting to hold up emoji as a kind of digital universal translator — so simple to use and understand, they can break down language barriers. Tempting, but wrong (or, in emoji, 👎).

As everyone who’s spent time arguing about 🙏 (high-five, or praying hands?) knows, emoji aren’t always clear — and the situation is worse when you’re dealing with different illustrations from Google, Apple, Facebook, and other tech companies. A new study from researchers at the University of Minnesota’s GroupLens laboratory shows that even when two people are looking at the same exact icon, they often have widely varying interpretations of its sentimental and semantic meanings. These disagreements are exacerbated when moving between platforms, as different tech companies have different art styles: “Grinning face with smiling eyes” looks very different on iPhones and Apple computers than it does on Android phones and in Google Hangouts. (The names and concepts behind emoji are officially approved by the unaffiliated Unicode Consortium, but it’s up to platform holders to illustrate their specific appearances.)

For one part of the study, survey participants were asked to evaluate the affects of various emoji on a ten-point scale, from –5, or negative, to 5, or positive. Even when participants were looking at the same icon, they had different ideas about its meaning. Take, for example, the aforementioned “Grinning face with smiling eyes”:

This seems like a fair response: the Apple “grin” is exactly the same as its “grimace,” and the “smiling eyes” are only visible at a large size. It’d be easy for an Android user to send Google’s “grinning face with smiling eyes” and for an iPhone-using recipient to interpret it very differently. More than a third of all emoji have this wide range of interpretation across platforms.

The study measured both between-platform and within-platform analysis, measuring not just the gap between interpretations of Android and Apple emoji, but the gap between an emoji’s intended meaning and its interpretation by a given platform. Take “loudly crying face,” which expresses a negative sentiment but which Apple users assign a positive sentiment — probably because it’s often used to indicate “crying laughter.” Also a problem for Apple users is our old friend “Grinning face with smiling eyes”:

Obviously, emoji are fluid: “eggplant” can mean, uh, a few different things. But if Apple users all believe “crying face” is positive, and Google users don’t, you could end up with some awkward conversations.

Users were also asked to interpret the emoji semantically — as in, “what does this emoji mean?” — and once again demonstrated that there are no universal definitions. The “smirking face” emoji had one of the highest misconstrual scores scores for every platform in the survey, except for Google — which makes sense if you think about it, because who the hell knows what a smirk actually means in any given situation.

The widest semantic interpretation between different platforms applied to the “person raising both hands in celebration” (🙌) emoji. Inversely, everyone pretty much agreed on what the “smiling face with heart-shaped eyes” (😍) meant. 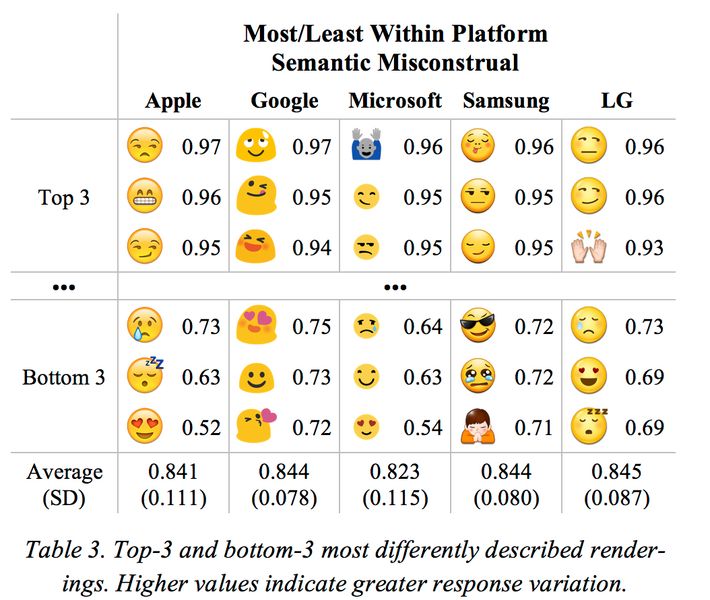 Still no word on whether these hands 🙏 are praying or high-fiving. (For the record: praying.)

Overall, the researchers concluded that between platforms, and within them, there is a clear chance for people to misinterpret emoji on what they mean sentimentally and literally. So if you believed that emoji would somehow magically fix communication, think again. They might just be mucking things up more.

THE FEED
14 mins ago
housing
housing
To ‘Build Back Better,’ America Must Build More Housing
By Eric Levitz
A historic housing shortage threatens to hamper the post-COVID recovery.
1:14 p.m.
side effects
side effects
Why the Second COVID Shot Makes You Miserable
By Jeff Wise
Unpleasant side effects are in part a consequence of lightning-quick vaccine development.
12:04 p.m.
foreign interests
foreign interests
Withdrawing From Afghanistan Is Biden’s Least Bad Option
By Jonah Shepp
The pullout of U.S. troops will likely have tragic consequences for Afghans, but remaining indefinitely offers no clear path to victory.

10:00 a.m.
politics
politics
5 Revelations From John Boehner’s New Memoir
By Jonann Brady
In On the House, the former Speaker praises Nancy Pelosi’s “killer instinct,” unloads on Ted Cruz, and claims Mark Meadows once begged on his knees.
9:27 a.m.
intelligencer chats
intelligencer chats
What the Mainstreaming of Crypto Means for Normies
By Benjamin Hart and Jen Wieczner
Digital currencies are likely to become more intertwined with everyday life.
8:00 a.m.
politics
politics
The GOP’s Barebones America
By Sarah Jones
Behind a narrow definition of infrastructure lies a narrow vision for the country.
7:58 a.m.
mass shootings
mass shootings
8 Killed in Shooting at FedEx Warehouse in Indianapolis
By Margaret Hartmann
At least five other people had been hospitalized with injuries, including one in critical condition. Police said the gunman killed himself.
7:00 a.m.
capitol hill
capitol hill
Chuck Schumer Has Changed
By Gabriel Debenedetti
Why is the former “angry centrist” pushing his party to go bigger, bolder, and more progressive?
4/15/2021
nyc mayoral race
nyc mayoral race
The New York City Mayoral Race Is Starting to Get Petty
By Matt Stieb
In the nation’s largest city, leading mayoral candidates Andrew Yang and Eric Adams squabbled on Thursday over New York officials’ parking habits.
4/15/2021
vision 2020
vision 2020
Yes, Geographical Polarization Was a Big Deal in 2016 and 2020
By Ed Kilgore
New data shows that the suburban swings to the left and rural swings to the right are consistent with the intuitive trends in the last two elections.
4/15/2021
crime
crime
Why Do Tasers Look Like Guns Anyway?
By James D. Walsh
Daunte Wright’s killer is not the first law-enforcement officer to confuse the two, often with deadly consequences.
4/15/2021
police shootings
police shootings
Video Shows Chicago Police Shooting and Killing 13-Year-Old With His Hands Up
By Intelligencer Staff
The Chicago agency investigating police shootings released the graphic footage of an officer shooting Adam Toledo, whose hands were raised.
4/15/2021
infrastructure
infrastructure
GOP to Biden: Raise Taxes on Our Rural Base, Not Coastal Elites
By Eric Levitz
Biden wants to fund infrastructure with taxes on the (largely coastal) corporate elite. Republicans insist on soaking their own base instead.
4/15/2021
coronavirus
coronavirus
Israel Drops COVID Rule Requiring Masks Outdoors
By Matt Stieb
It’s a milestone for one of the nations to roll out the vaccine the fastest, though vaccination rates in Palestine lag significantly.
4/15/2021
extremism
extremism
McConnell Howls About Court-packing Just As Pelosi Nixes It
By Ed Kilgore
It’s a good example of how smears of the opposing party can run abruptly into countervailing reality.
4/15/2021
minnesota
minnesota
Is This a Community?
By Zak Cheney-Rice
Despite their rhetoric, the Brooklyn Center police have an open disinterest in actual community with city residents.
4/15/2021
climate change
climate change
New York Magazine’s David Wallace-Wells Testifies Before the Senate on Climate
By Paola Rosa-Aquino
Author of The Uninhabitable Earth on the cost of inaction.
4/15/2021

“The routine surgery was successful, and he is expected to fully recover and return to normal activity in the coming days,” Pence’s office says.
—@NBCNews
4/15/2021
crime
crime
Derek Chauvin Invokes Fifth Amendment, Won’t Testify
By Nia Prater and Margaret Hartmann
The defense has rested and closing arguments are set for Monday.
4/15/2021
the economy
the economy
The Biden Boom Has Begun
By Eric Levitz
Jobless claims are falling, factory production is rising, and retail sales are skyrocketing as Biden’s stimulus kicks in.
4/15/2021
politics
politics
Independents Aren’t Nonpartisan, They’re Just Disengaged
By Ed Kilgore
The increasing number of self-identified independents feeds partisan polarization by turning the parties over to ideologues and “outsiders.”
4/15/2021
crime
crime
Ex-Officer Who Fatally Shot Daunte Wright Charged With Manslaughter
By Nia Prater
Kim Potter was arrested and charged with second-degree manslaughter on Wednesday. She has been released on a $100,000 bond.
4/15/2021
covid-19
covid-19
What We Know About the Johnson & Johnson Pause and Vaccine Hesitancy
By Paola Rosa-Aquino
Europe faced a similar problem over a shot and clots.
4/15/2021
solarwinds
solarwinds
U.S. Sanctions Russia Over SolarWinds Hack
By Benjamin Hart
For the first time, the Biden administration named a specific suspect it deems responsible for the breach.
4/15/2021

A House committee voted on Wednesday to recommend for the first time the creation of a commission to consider providing Black Americans with reparations for slavery in the United States and a “national apology” for centuries of discrimination.

The vote by the House Judiciary Committee was a major milestone for proponents of reparations, who have labored for decades to build mainstream support for redressing the lingering effects of slavery. Democrats on the panel advanced the legislation establishing the commission over Republican objections, 25 to 17.

The bill — labeled H.R. 40 after the unfulfilled Civil War-era promise to give former slaves “40 acres and a mule” — still faces steep odds of becoming law. With opposition from some Democrats and unified Republicans, who argue that Black Americans do not need a government handout for long-ago crimes, neither chamber of Congress has committed to a floor vote.

House Panel Advances Bill to Study Reparations in Historic Vote
—New York Times
4/15/2021
learning
learning
Why Public Schools Shouldn’t Offer a Remote Option This Fall
By David Zweig
It’s bad for learning, it’s expensive, and it sends the wrong message about whether our schools are safe.
4/14/2021
supreme court
supreme court
Democrats to Introduce Bill Expanding Supreme Court to 13 Justices
By Matt Stieb
The bill is dead on arrival, but it could revive SCOTUS reform efforts that gained momentum after the rushed confirmation of Amy Coney Barrett.