Is Westchester County upstate? It depends on who you ask. Photo: Doug Kerr/wikimedia commons

Last month, as Governor Cuomo and legislators in Albany considered a plan that would raise the state’s minimum wage to $15 an hour, but do so faster in the five boroughs than upstate, we were reminded that the boundaries of “upstate New York” are very much up for debate. Indeed, even politicians in Yonkers, right there on the border of the Bronx, couldn’t form a consensus. And a new poll, conducted by Public Policy Polling, confirms that, yep, New Yorkers don’t agree, at all, on what’s considered upstate.

The results tell us what we already assumed: There’s no consensus. Each of the first three of those options had considerable support. “North of Westchester County,” at 29 percent, was the most popular answer. “North of New York City” came in second, at 25 percent. And “North of Poughkeepsie” was third, with 22 percent. Only seven percent responded that upstate was everything north of Poughkeepsie but excluding the Buffalo area. (That last camp, presumably, includes those who believe that “Western New York” is its own distinct category.) Nine percent said the answer was “something else,” while seven percent said they were unsure.

But broken down by region, some responses were more popular in some areas than others. 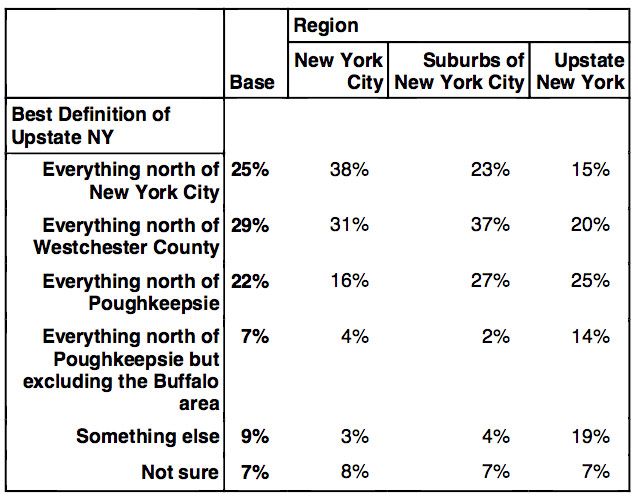 Nobody Knows Where ‘Upstate New York’ Actually Is

+Comments Leave a Comment
Poll: No One Knows Where ‘Upstate New York’ Is