For a brief period of time, “#NeverTrump” was practically Marco Rubio’s presidential-campaign slogan. Rubio made slashing attacks on Trump as a “con artist.” Rubio’s campaign website sold anti-Trump swag, like a “#Never Trump” bumper sticker. “#NeverTrump,” of course, the hashtag slogan of a movement of Republicans who have vowed to withhold their support from Trump even if he wins the party nomination (which is the straightforward and, in fact, only understood meaning of the word never). But last month, Rubio conceded that “#NeverTrump” merely meant that he wouldn’t vote for Trump in the Republican primary. And now, appearing on Univision, Rubio sounds ready to rally around Trump:

“Look, let’s not divide the party. You have someone here who has all these votes, very close to get 1,237, let’s not ignore the will of the people or they’re going to be angry. Delegates may decide on that reason that they decide to vote for Donald Trump, but if they don’t it’s not illegitimate in any way,” he told Miami radio host Jimmy Cefalo.

“I’ve always said I’m going to support the Republican nominee, and that’s especially true now that it’s apparent that Hillary Clinton will be the Democrat nominee,”

Donald Trump is a con artist — and he cannot be our nominee. #NeverTrump https://t.co/3ZYQZraCfNhttps://t.co/8wm9ToY7El

Donald Trump will never be the nominee of the party of Lincoln and Reagan. #NeverTrump

So maybe a con artist can be the Republican nominee after all. Perhaps we should have paid more attention to the fact that Rubio’s campaign page advertising the “#NeverTrump” bumper sticker used the word removable. Twice. 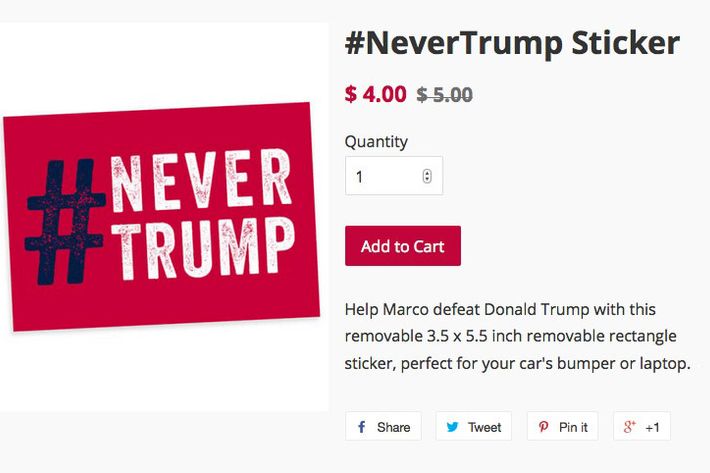 THE FEED
5:41 p.m.
stop the presses
stop the presses
Just What Did the Times Walkout Change?
By Shawn McCreesh
Some employees have said they are ready to vote on a strike authorization as soon as tomorrow. Others worry this has all gone too far.
4:29 p.m.
tremendous content
tremendous content
Do the Trumps Want to Crop Kimberly Guilfoyle Out of the Family?
By Margaret Hartmann
Eric Trump felt compelled to announce that, despite the rumors, he doesn’t hate his brother’s fiancée. Ivanka Trump’s silence may say more.
2:34 p.m.
sports
sports
Brittney Griner Is Coming Home From a Russian Prison
By Margaret Hartmann and Nia Prater
The WNBA star is headed home after being released in a prisoner swap for the notorious international arms dealer.