“America is sick of” the haters. Photo: Alex Wong/Getty Images

Donald Trump’s tumultuous week began last Wednesday, when his comments on abortion drew ire from all sides. It continued Saturday, when the Trump campaign announced it would reduce the role of embattled campaign manager Corey Lewandowski, and it culminated with a shocking admission from Trump on Sunday: He does, in fact, make mistakes. Despite the fact that many would see this as a rough patch, the Trump campaign is determined not to let the haters and losers get it down.

In an internal memo obtained by the Washington Post, senior Trump campaign adviser Barry Bennett details how, despite the Establishment media’s attempt to cast a shadow on Trump’s campaign, this week was in fact a great victory. As he puts it, “Donald Trump 1, Washington Establishment/Media 0.”

The “internal campaign memorandum,” titled “Digging through the Bull Shit [sic]” and addressed to “Corey and Team,” rips the week’s media coverage as “yet another pathetic display by the so-called experts who line their pockets at the expense of our candidates and causes.” It goes on to illustrate exactly how, according to the “only true tracking poll publicly available,” Trump has gained on his rivals throughout the week. 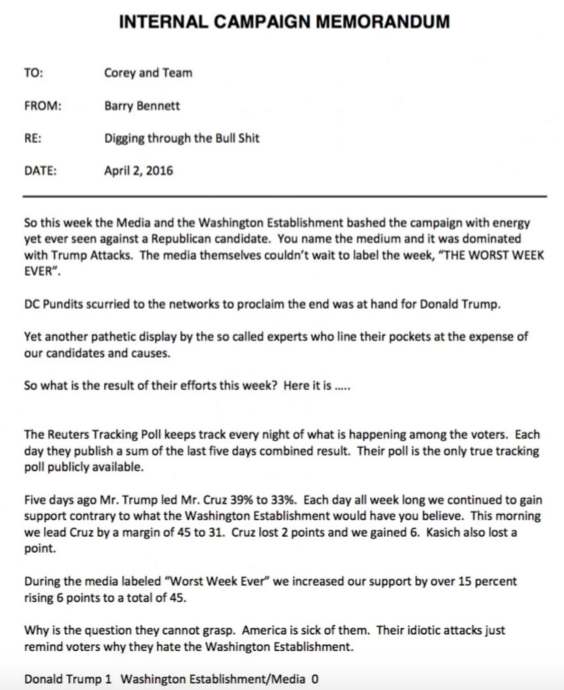 “During the week they labeled the ‘Worst Week Ever,’ we increased our support by over 15 percent,” Bennett writes. “Why is the question they cannot grasp. America is sick of them. Their idiotic attacks just remind voters why they hate the Washington Establishment.”

Trump hopes to end his sour streak in Wisconsin, where both he and Cruz have been campaigning hard in preparation for Tuesday’s primary. Trump told the New York Times that Wisconsin “feels very much like New Hampshire to me.” He went on, “Trump wasn’t going to win New Hampshire, and then all of a sudden, we win in a landslide. Because I could I feel it with the people. I can feel it with the people in Wisconsin.”

THE FEED
8:00 a.m.
the national interest
the national interest
The Democratic Party Needs Better Moderates
By Jonathan Chait
The centrists have lots of complaints but no solutions.
6:00 a.m.
the city politic
the city politic
Waiting (and Waiting) for an Adams Doctrine
By David Freedlander
Six months into a highly energetic mayoralty, how has Eric Adams changed the city — if at all?
6/30/2022
u.s. supreme court
u.s. supreme court
Supreme Court Agrees to Hear Case That Could Gut Voting Rights
By Ed Kilgore
Odds are good the conservative majority will confirm total legislative control of redistricting and (more alarmingly) of all election rules.

6/30/2022
off-season drama
off-season drama
The Nets May Be Truly Screwed Now
By Matt Stieb
Kevin Durant reportedly wants out, leaving Kyrie Irving as possibly the only superstar standing next year.
6/30/2022
the body politic
the body politic
The Abortion Stories We Didn’t Tell
By Rebecca Traister
How decades of silence left us unprepared for the post-Roe fight.
6/30/2022
early and often
early and often
Supreme Court Ends Term by Sabotaging Fight Against Climate Change
By Ed Kilgore
The finale to this devastating term was a landmark decision by conservative justices limiting the EPA’s ability to regulate greenhouse-gas emissions.
6/30/2022
crypto
crypto
Oh Look, RadioShack Is Edgy on Twitter Now
By Kevin T. Dugan
A marketing YouTuber is behind the zombie brand’s online resurgence, which is really a crypto gambit.
6/30/2022
explainer
explainer
Trump’s Long Campaign to Steal the Presidency: A Timeline
By Ed Kilgore
The insurrection wasn’t a one-day event. It was the culmination of a multifaceted, yearslong plot — and it isn’t over.
6/30/2022
life after roe.
life after roe.
Women Aren’t Saviors
By Sarah Jones
Liberation requires collective struggle.
6/30/2022
life after roe
life after roe
Biden: Scrap the Filibuster (Once) to Codify Abortion
By Benjamin Hart
The ultimate Senate traditionalist backs a more drastic approach for the second time in a year.
6/30/2022
the national interest
the national interest
Democrats Must Reform the Supreme Court to Save It
By Jonathan Chait
Republicans won control of the Court playing by the rules. The rules are bad.
6/30/2022
life after roe
life after roe
State Constitutions Are Now an Urgent Abortion Battleground
By Ed Kilgore
Now that Roe v. Wade is gone, state courts, and in some cases voters, will decide whether to give abortion rights constitutional protection.
6/29/2022
just asking questions
just asking questions
Filmmaker Alex Holder Says Trump Was ‘Utterly Irrational’ After January 6
By Benjamin Hart
The documentarian talks about what he saw before, during, and after the attack on the Capitol while he was embedded with the First Family.
6/29/2022
early and often
early and often
The Most Explosive Revelations From Cassidy Hutchinson’s Testimony
By Margaret Hartmann
The ex–Mark Meadows aide testified that Trump lunged at a Secret Service agent on January 6 and said of the armed mob, “They’re not here to hurt me.”
6/29/2022
early and often
early and often
2022 Midterms: A Guide to the Races Worth Watching
By Ed Kilgore
A cheat sheet to keep track of all the crucial races, primary upsets, and campaign drama — Trump-fueled and otherwise — from now through Election Day.
6/29/2022
early and often
early and often
The Drama-Lover’s Guide to the New Trump Books
By Margaret Hartmann
Love gossip, but not enough to actually read the new batch of Trump books? Here are all the juicy, disturbing, and darkly amusing tidbits you missed.
6/29/2022
the city politic
the city politic
What Happened to the Left in New York on Tuesday?
By Ross Barkan
Up and down the ballot, progressives couldn’t break through. The energy of the Trump years is gone, and it’s not clear what may replace it.
6/29/2022
early and often
early and often
Denied Communion at Home, Pelosi Receives It at the Vatican
By Ed Kilgore
Pope Francis’s actions were a rebuke to conservative U.S. bishops, who have attempted to ban pro-choice politicians, including Biden, from Communion.
6/29/2022
january 6 committee
january 6 committee
Cassidy Hutchinson Shows Trump’s Complicity in the Attack on the Capitol
By Ed Kilgore
The former top aide provides a clear and damning account of the White House on January 6 and the man who started the riot.
6/29/2022
2022 midterms
2022 midterms
Illinois Republicans Go MAGA While Moderates Prevail in Colorado Primaries
By Ed Kilgore
Trump chose his battles wisely in the June 28 primaries, picking two winners in Illinois and staying out of Colorado’s contentious races.
6/29/2022
jan. 6 hearings
jan. 6 hearings
Liz Cheney Alleges January 6 Witnesses Are Being Intimidated
By Nia Prater
“He knows you’re loyal, and you’re going to do the right thing.”
6/29/2022
exhibit a
exhibit a
The Odds Are Going Up That Trump Could Be Charged
By Ankush Khardori
Cassidy Hutchinson advances the 1/6 committee’s theory of the case, though it’s not a slam dunk.
6/29/2022
investigations
investigations
How Leslie Wexner Helped Create Jeffrey Epstein
By Shawn McCreesh
A new documentary traces the relationship between the predator, his benefactor, and the New York media.
6/29/2022
early and often
early and often
Does Lee Zeldin Stand a Chance Against Kathy Hochul?
By Ross Barkan
It’s shaping up to be a good year for Republicans nationally, but that may only go so far in New York.
6/28/2022
politics
politics
Antonio Delgado Fends Off Challenge From Ana María Archila
By Nia Prater
The lieutenant governor wins the Democratic nomination for a full term, after a last-minute threat from a progressive endorsed by AOC.