If Democrats want to build a generous welfare state like Denmark’s — and they should! — they’ll have to find a way to convince most Americans to pay higher taxes. Because the political willpower for higher middle-class taxes currently does not exist, Democrats instead rely on tax hikes exclusively on the rich, which helps, but doesn’t provide enough potential revenue to fund a full-scale social democracy. One partial solution to this problem is to increase revenue through public-health-related taxes on things like tobacco or sugary soda. I recently pointed out the oddity of Bernie Sanders’s opposition to such a tax, given that Sanders is a proponent of both a Danish-style social democracy in general and a health-care plan that raises taxes on low-income earners in particular. Matt Bruenig takes issue, focusing on the question of how much higher taxes are in Denmark. I wrote that the Danes “do not tax the rich all that much more heavily than the United States does.” Bruenig counters, “This is simply untrue. The Nordic countries do tax the rich much more heavily than the US does.”

Why Is Bernie Sanders Making Right-Wing Arguments Against Taxing Soda?
Obamacare Haters Still Not Giving Up, Still Totally Wrong
Trump’s Barbarians Were Inside the Conservative Castle All Along

It’s not untrue, and Bruenig does not really support his claim. He produces a chart showing that the top labor tax rate in Denmark is about 56 percent, compared with 47 percent in the United States. If that data did fully answer the question of how much the rich are taxed, it would hardly make my claim “simply untrue” — after all, I concede that Denmark does tax the rich at a higher rate, just not “all that much more heavily.” Bruenig is resting an awful lot of rhetorical weight on just how large of a difference qualifies as “all that much.”

In any case, his numbers do not settle the question. Labor taxes are only one way in which the rich are taxed. There is also taxation of business income, capital gains, dividends, and inheritances. Denmark’s “high rates on personal income,” as Jonathan Cohn wrote in 2007, “mask relatively low rates on investment capital and corporate earnings.” The overall difference in tax rates on the rich is less than the figure Bruenig displays.

I was unable to find a comprehensive comparison of the total effective tax rate faced by the rich in the U.S. and Denmark, which is why I fell back on the loose terminology that nonetheless set off Bruenig. Following up on Bruenig’s dissent, I asked Lane Kenworthy — an economist who has argued for bringing social democracy to the U.S., and whose work on the topic has influenced me — if he had more precise data. He replied:

What we need for Denmark (and other rich countries) is the effective tax rate paid by the top 1% and at other points in the distribution, with all types of taxes included — as CTJ has done for the US at http://ctj.org/ctjreports/2015/04/who_pays_taxes_in_america_in_2015.php#.VyEoAWbmlu4. To my knowledge we don’t have that.

Your piece made the point, assuming I understand you, that Denmark’s tax system isn’t more progressive than ours. Bruenig is making the point (though he doesn’t have the data) that Denmark’s effective tax rate on the 1% is higher than ours. Both are true. As best I can tell, Denmark taxes everyone at a higher rate than we do, and their tax system is no more progressive than ours — probably a bit less progressive (the tax wedges Bruenig looks at don’t include consumption/VAT taxes).

A 2008 post by Kenworthy shows that the Danish tax code does not redistribute income more aggressively than the American tax code. (Differences in redistribution through taxes are represented by the white circles.) The difference is all on the spending side (the black diamonds): 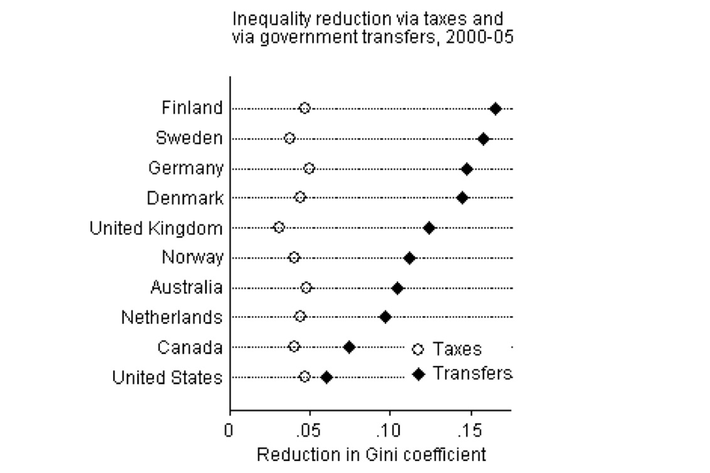 Again, given the political constraints posed by public opinion in the U.S., it makes sense to focus on heavier taxes on the rich. It also makes sense to find opportunities for other sources of revenue to fund worthy investments, like prekindergarten education in Philadelphia. The point of my post was that it is ideologically self-defeating for Bernie Sanders to oppose such an effort. Do Bruenig and other Sanders enthusiasts disagree?

THE FEED
11 mins ago
2022 midterms
2022 midterms
Woman Alleges Herschel Walker Wanted Her To Have a Second Abortion
By Ed Kilgore
A troubled candidacy is now clouded not just by allegations of past misconduct and hypocrisy, but by the appearance of serial lying.
5:02 p.m.
texas school shooting
texas school shooting
Uvalde Schools Just Suspended All Their Cowardly Cops
By Matt Stieb
The bold move from the school district comes soon after their police hired an officer under state investigation for failing to respond in May.
4:48 p.m.
early and often
early and often
You Don’t Have to Be Southern to Be a Neo-Confederate
By Ed Kilgore
Thanks to the MAGA movement’s politics of racial resentment, support for Confederate symbols of white supremacy has spread across the country.

2:32 p.m.
early and often
early and often
It’s Willie Horton Season in the Midterms
By Matt Stieb
Ron Johnson and Mehmet Oz have clawed their ways back in the polls by blaming Democrats for violent crime and blowing racist dog whistles.
1:51 p.m.
tremendous content
tremendous content
Joe Biden’s Hot-Mic Moments, Ranked
By Margaret Hartmann
Perhaps “No one f- - -ks with a Biden,” as the president said, but a live microphone can certainly trip him up.
1:42 p.m.
early and often
early and often
Biden Calls Out MAGA Judges, Democratic Congress on DACA
By Ed Kilgore
The president’s odd remark underscores that he and his allies need a better strategy for keeping their promises to Dreamers.
10:55 a.m.
court appearances
court appearances
Elon Musk’s Big Win Over Twitter Is a Win for Twitter
By Kevin T. Dugan
The deal is happening, and by Halloween, the social network should belong to the Tesla chief.
10:00 a.m.
early and often
early and often
Who Thought Putting a Casino in Everyone’s Pocket Was a Good Idea?
By Ross Barkan
Lately, Democrats are rushing to promote more legalized gambling in their campaigns with no apparent regard for manufacturing a generation of addicts.
9:00 a.m.
police reform
police reform
The NYPD Brutalized Protesters in 2020. Will There Be a Reckoning?
By Ali Winston
The city is engaged in an epic legal battle that could transform the way it handles protests.
6:00 a.m.
the inside game
the inside game
What Biden Privately Thinks About the Midterms
By Gabriel Debenedetti
Behind closed doors, his 2022 priorities (like beating Ron Johnson) are also about his 2024 reelection.
10/6/2022
politics
politics
Biden Pardons Thousands of Marijuana Charges, ‘Dank Brandon’ Memes Follow
By Nia Prater
The president frees up federal weed policy.
10/6/2022
politics
politics
Feds Reportedly Think They Have Enough to Charge Hunter Biden
By Benjamin Hart
Investigators are said to have enough evidence to charge the president’s son over unpaid taxes and allegedly lying on an application to buy a gun.
10/6/2022
politics
politics
Want to Pack Heat in Times Square? You May Be in Luck.
By Benjamin Hart
A federal judge ruled that New York can’t turn Times Square into a gun-free zone, though the state’s strict firearms law stands for now.
10/6/2022
early and often
early and often
Herschel Walker’s Abortion Story Has Become Incoherent
By Matt Stieb
First it was a “flat-out lie,” now it’s just an indiscretion.
10/6/2022
politics
politics
Secret Service Doesn’t Know How to Drive, Pull Off Cover-up
By Nia Prater
An SUV taking the vice-president to work Monday hit a curb, but the Secret Service initially said it was due to a “mechanical failure.”
10/6/2022
the sports section
the sports section
The Mets Didn’t Collapse. So Why Does It Feel Like They Did?
By Joe DeLessio
A messy end to a charmed season.
10/6/2022
the money game
the money game
The Fed Might Just Break the Global Economy
By Eric Levitz
A conversation with Adam Tooze.
10/6/2022
the national interest
the national interest
Illiberal Chic Deserves to Die on the Battlefield of Putin’s Failed War
By Jonathan Chait
Being authoritarian doesn’t make your country strong or smart.
10/6/2022
2022 midterms
2022 midterms
Herschel Walker’s Desperate Religious Counterattack
By Ed Kilgore
Walker’s redemption story has always been key to his campaign. It’s losing credibility as new scandals emerge and he attacks Raphael Warnock’s faith.
10/6/2022
early and often
early and often
‘Here Come the Tax Auditors!’ Republicans Scream in Torrent of Dishonest Ads
By Ed Kilgore
The new money for IRS employees is designed to fill long-empty positions at a struggling agency. But GOP ads say it’s an attack on the middle class.
10/6/2022
the power trip
the power trip
Maggie Haberman on How She Covers Trump Without Losing Her Mind
By Olivia Nuzzi
A conversation about her critics, Trump family feuds, and the one time he used a fake baby in a photo op.
10/5/2022
screen time
screen time
Elon Musk’s Incredible Shrinking Future
By John Herrman
He charmed his fans with visions of Mars and cool cars. But an “everything app” just sounds like a nightmare.
10/5/2022
kids these days
kids these days
The Whiny Grade-Grubbing NYU Students Have a Point
By Eric Levitz
It is too hard to become a doctor in the United States.
10/5/2022
poll position
poll position
Democrats Aren’t Laughing at Dr. Oz Anymore As Pennsylvania Race Tightens
By Ed Kilgore
Recent polls show the Pennsylvania Senate race between John Fetterman and Mehmet Oz — a must-win for both parties — is a toss-up.
10/5/2022
tremendous content
tremendous content
Bonkers Revelations From Maggie Haberman’s Trump Book, Ranked
By Margaret Hartmann
If you want more information on Trump being weird with toilets and belittling Jared Kushner, Confidence Man has you covered.