In the 1990 movie Quick Change, Bill Murray, Geena Davis, and Randy Quaid rob a bank in New York with surprising ease, then find the task of simply getting to the airport almost impossible. Near the end, with no time to spare, the trio has managed to board a bus to the airport, only to be detained when a — well, “hippie” is a bit of a cliché, so let’s just say, a man who appears to have had formative experiences in the 1960s — stages a mini-demonstration rather than exit. At the current stage of the Democratic presidential primary contest, Bernie Sanders is this man:

Sanders has his reasons for staying in the race. They may not be entirely terrible reasons. Maybe he wants the chance to continue speaking about his policies through the last primary, or perhaps he wants the leverage to push through changes to the nominating process. But, given the overall stakes of his behavior, his decision is also maddeningly narcissistic. Despite his loud protests, the system, for all its hodgepodge qualities, is definitely not rigged against him. Sanders is losing because significantly fewer people have voted for him. Hillary Clinton has won 56 percent of the vote, and 54 percent of the pledged delegates. Primaries that have excluded independents (the democratic quality of which can be debated) have helped her, but caucuses (which are even less democratic) have helped him.

Instead, his campaign is making increasingly hysterical claims of fraud and misconduct. At a convention in Nevada, Sanders supporters threw a fit when their attempt to overturn the results of a caucus, won fair and square at the polls by Clinton, failed. Numerous neutral journalists have described the Sanders campaign’s complaints as utterly fallacious. Nonetheless, these claims are having an effect. The Sanders drumbeat depicting Hillary Clinton’s now-inevitable win as the product of corrupt machinations by insidious big-money interests is turning his supporters staunchly against her: 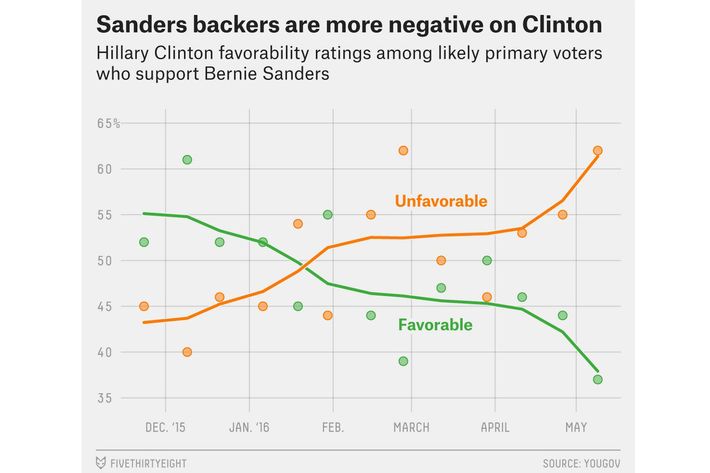 Clinton is struggling in head-to-head polls against Donald Trump mainly because her supporters tell pollsters they would pull the lever for him against Trump, while his supporters increasingly refuse to say the same for her. Now, much or even all of this problem can be massaged away by autumn. However, it is at least possible that Sanders is getting carried away in a messianic fervor that he will not walk away from readily. A recent New York Times story described numerous Sanders staffers as “disheartened” by the campaigns “near-obsession with perceived conspiracies on the part of Mrs. Clinton’s allies.”

If there is a reason to believe Sanders might not unify his supporters behind Clinton, as ordinary losing candidates do, it’s that Sanders has never seen his political project in ordinary terms. Sanders places himself substantively on his party’s left wing, of course. But more than that, Sanders has depicted his campaign as a metaphoric “revolution.” A revolutionary campaign, even a bloodless one, does not follow normal political guidelines. Since it regards itself as the legitimate incarnation of the popular will, any mechanism that thwarts its triumph is ipso facto illegitimate. This explains the unusual propensity of Sanders supporters to circulate conspiracy theories suggesting Sanders has been robbed, which are merely more deranged versions of Sanders’s own rhetoric. Sanders’s statement in response to the outburst of his supporters in Nevada is a revealing peek into the revolutionary mindset:

“It is imperative that the Democratic leadership, both nationally and in the states, understand that the political world is changing and that millions of Americans are outraged at establishment politics and establishment economics. The people of this country want a government which represents all of us, not just the 1 percent, super PACs and wealthy campaign contributors.

“The Democratic Party has a choice. It can open its doors and welcome into the party people who are prepared to fight for real economic and social change – people who are willing to take on Wall Street, corporate greed and a fossil fuel industry which is destroying this planet. Or the party can choose to maintain its status quo structure, remain dependent on big-money campaign contributions and be a party with limited participation and limited energy.”

What makes this so telling is that Sanders depicts a procedural quarrel — one in which his campaign has no leg to stand on — as a fight between “the 1 percent” and “the people of this country.” Sanders has a longstanding habit of attributing any disagreement with his policies as the result of corruption, disregarding the possibility that actual conviction might inspire any of it. He accordingly believes that only the corrupt power of big money has prevented his ideas from prevailing. Sanders is now applying the same logic to the primary fight, with Clinton in the role of greedy corporate overlord. Sanders does not merely believe he deserves to win, he believes that a Sanders defeat means the people have been thwarted; ergo, such a result is necessarily rigged.

It’s remarkable that the opponents to Donald Trump, who (accurately) depicted him as a con artist, an authoritarian, and an existential threat to their party’s character have all stepped aside, even in the face of mathematical odds less daunting than those of Sanders, who continues to fight on. It’s possible that both Sanders and the Republican opposition to Trump care less about stopping Trump than anybody expected.

THE FEED
1:13 p.m.
what we know
what we know
New Details Emerge About the Texas School Shooting
By Intelligencer Staff
The gunman barricaded himself in a fourth-grade classroom for an hour or more.
11:33 a.m.
gun violence
gun violence
There Is a Future for Gun Control
By Kevin T. Dugan
The NRA won after Sandy Hook, but today the gun lobby is in disarray and gun safety is slowly making gains in states.
8:00 a.m.
the money game
the money game
The Rise and Fall of Wall Street’s Most Controversial Investor
By Jen Wieczner
Cathie Wood built a thriving brand out of price-prediction porn — then the tech bubble popped.

5/25/2022
the national interest
the national interest
The Conservative Playbook for Deflecting Anger After Mass Shootings
By Jonathan Chait
Ignoring the obvious connection between gun deaths and lax gun laws in three easy steps.
5/25/2022
texas school shooting
texas school shooting
Beto O’Rourke Confronts Greg Abbott Over Shooting: ‘This Is on You!’
By Matt Stieb
The Democratic candidate for governor interrupted a press conference about the elementary-school shooting before he was pulled away by security.
5/25/2022
early and often
early and often
2022 Midterms: A Guide to the Races Worth Watching
By Ed Kilgore
A cheat sheet to keep track of all the crucial races, primary upsets, and campaign drama — Trump-fueled and otherwise — from now through Election Day.
5/25/2022
early and often
early and often
The Bush Political Dynasty Ends With a Whimper
By Ed Kilgore
The once-dazzling George P. Bush lost badly to Trump-backed Attorney General Ken Paxton, whom he called a “philandering felon.”
5/25/2022
gun violence
gun violence
Why We Keep Letting This Happen
By Ross Barkan
A non-exhaustive list includes the filibuster, radical red states, the archconservative Supreme Court, and a toxic national tradition.
5/25/2022
early and often
early and often
Trump Dumped Mo Brooks. He Made the Senate Runoff Anyway.
By Ed Kilgore
The January 6 speaker survived Trump’s ludicrous “woke” accusation and will face Katie Britt in next month’s Alabama GOP Senate runoff.
5/25/2022
early and often
early and often
The Devil Went Down to Georgia and Lost
By Ed Kilgore
Trump spent the past two years working to exile Brian Kemp and Brad Raffensperger from the GOP, but he couldn’t do it.
5/25/2022
early and often
early and often
President Mike Pence Would Be Worse Than Trump
By Ross Barkan
The former vice-president is attempting to bolster his chances in 2024, but Democrats would be wise to beware any attempt to rehabilitate his image.
5/25/2022
foreign affairs
foreign affairs
The American Running Rescue Missions in Ukraine
By Rachel Nostrant
Kathy Stickel has pulled dozens of people out of harm’s way by putting herself in it.
5/25/2022
plagued
plagued
Welcome to the Next COVID Wave
By Chas Danner
The new wave fueled by the BA.2.12.1 subvariant might not be as big or bad as the last one, but there are still plenty of ways it can go wrong.
5/24/2022
2022 midterms
2022 midterms
Republicans May Have Sabotaged Their Best Chance to Beat Whitmer
By Matt Stieb
Five GOP candidates for governor in Michigan — including the top two contenders — faked signatures to get their names on the ballot.
5/24/2022
adam neumann
adam neumann
Adam Neumann’s New Business Plan
By Kevin T. Dugan
The former WeWork CEO wants to get rich(er) by helping corporations appear more environmentally sustainable than they really are.
5/24/2022
partygate
partygate
Millionth Boris Johnson Pandemic Party Exposed
By Benjamin Hart
Will this be the one that forces his resignation? Nah, probably not.
5/24/2022
early and often
early and often
Perdue Ends Flailing Campaign With Racist Remarks About Stacey Abrams
By Ed Kilgore
The former senator capped off his Trump-inspired challenge to Governor Brian Kemp by accusing the Democrat of “demeaning her own race.”
5/24/2022
games
games
The Most Disturbing Part of the Yankees’ ‘Jackie’ Incident Was the Fans
By Will Leitch
Yankee Stadium picking up Josh Donaldson’s taunt was another example of crowd dynamics gone haywire.
5/24/2022
vision 2024
vision 2024
Democrats Quietly Search for an Alternative to Biden in 2024
By Gabriel Debenedetti
Inside the 2024 soul-searching that’s happening in every corner of the Democratic Party — except the White House.
5/23/2022
new york
new york
Sean Patrick Maloney Is Getting Primaried After Ticking Off Democrats
By Matt Stieb
Progressive state senator Alessandra Biaggi is expected to challenge Maloney after he ditched his own seat to run in a less competitive district.
5/23/2022
politics
politics
House Ethics Committee Investigates Madison Cawthorn for Promoting Crypto
By Matt Stieb
Cawthorn is leaving in January, but he may be in trouble before then.
5/23/2022
life after roe
life after roe
Nancy Pelosi Communion Ban Is a Challenge to Pope Francis
By Ed Kilgore
The Vatican opposes the weaponization of Communion and stopped bishops from barring President Biden. Will Francis intervene on Pelosi’s behalf?
5/23/2022
just checking in
just checking in
So What Is Rudy Giuliani Up to These Days?
By Margaret Hartmann
Trump’s former attorney has been keeping busy by dealing with January 6–related legal woes, making weird videos, and arguing with parade hecklers.
5/23/2022
plagued
plagued
The COVID Vaccine News Many Parents Have Been Waiting For
By Matt Stieb
Pfizer has finally filed for FDA approval for a three-dose COVID vaccine for kids under the age of 5.
5/23/2022
foreign interests
foreign interests
Biden Says U.S. Will Defend Taiwan Against China — or Maybe Not
By Chas Danner
The president’s comment indicated an aggressive change in policy. The White House quickly walked it back.