To the uninitiated, the section of Twitter inhabited by teenage girls is a strange place full of prom pictures labeled #Goals, heart-eyed cat emoji, and accounts with massive followings and handles like @teenagernotes and @girlposts sharing nearly identical “relatable” content cribbed (often without attribution) from other people’s social accounts. Every once in a while, though, a nugget of pure viral gold is sifted from the dirt.

Making the rounds today are several pictures of insane diary entries scribbled in pink pen from a now-16-year-old Utah high school student, Madie, who says she wrote the notes when she was in second grade back in 2008. In them, she chronicles a heartbreaking saga from her younger years involving her crush, Riley, and their classmate, Jessica, who has stolen Riley’s attention. (The drama. The drama!)

found my diary from when I was 7 I'm dying😂😂💀 pic.twitter.com/M57wJhsmFd

In the hopes of luring Riley away from Jessica — who “hugs at least five boys every day” and is “such a player” (again, remember this was supposedly written when Madie was, um, 7) — Madie writes that she has decided to break the rules of feminism and tell Riley about Jessica’s “big secret” … Jessica still wears a diaper. (Harsh move, Madie.)

The next day, which just happens to be Valentine’s Day, Madie gifts Riley a handmade valentine (she and her sister stayed up late making it) which he promptly throws into the garbage, sending Madie home in tears. (Sad!) The following day, Riley declares his affections for Jessica, prompting Madie to declare, “I am done with boys. I want to kill all of them” to her diary. (See her illustration below.) 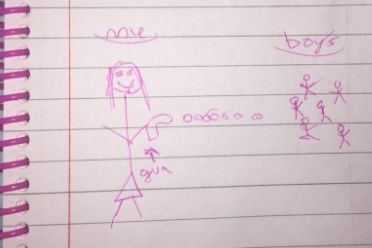 As a standalone bit, Madie’s story (which has already been retweeted over 11,000 times from her personal account alone) has all the makings of an decent rom-com: unrequited love, Valentine’s Day, a possible crime of passion. But I remained unconvinced that the a 7-year-old had actually lived, much less penned, such a dramatic and mature plot line, not to mention one that hits such beloved internet punch lines as “diapers” and “semi-ironic misandry.” (This may shock you, but you can’t believe everything you read on the internet these days.) Skeptical, I contacted, via Twitter, as many of the players as I could to find out more.

First up, Madie told me she has very vivid memories of spending Valentine’s Day 2008 “bawling,” and that the whole thing definitely happened. “I honestly don’t think I could ever make up something up this funny,” Madie reasoned.

Her older sister, Katelyn, told me about making the valentine for Riley. “I had the idea to make an origami box and fill it with chocolates for him. It took hours for us to completely finish and decorate the box,” she said. (Katelyn recalls the box being “white with stickers and hearts all over it,” while Madie says it was “blue,” but we’ll give them the benefit of the doubt on that discrepancy since this whole thing happened eight years ago and I can’t remember what I ate for breakfast today.)

And finally, Jessica, the former diaper-wearer herself admitted the anecdote was about her. “I remember dating Riley,” she told me. (When I asked what “dating” meant back then, she cited playground hand-holding and after-school phone calls.) Jessica also said her friends at school (she and Madie no longer live in the same town or state) have all seen the diary tweet, an experience she calls “mortifying, but very funny.”

The only person I couldn’t track down was our leading man, Riley. (Katelyn told me he’s not on social media: “[W]e looked, but the only thing we found was a picture of him on Facebook that someone else posted.”) So for now, we’ll just assume he’s still breaking hearts and laying the groundwork for some excellent viral tweets in the future.