It’s hard to think of a formerly essential device that’s been as thoroughly replaced as the alarm clock. I’m not sure I know anyone anymore who has an actual, physical alarm clock on their bedside table, when even just ten years ago, before the ascendance of the smartphone, it was an essential bit of tech. People still have cameras; they still wear watches; but the smartphone has more or less completely replaced the alarm clock. It shouldn’t have.

It’s true that phones make very good alarm clocks. They can wake you up at any time, obey any pattern of complex wake-up times, play any song or tone. You’re already carrying one around in your pocket, and probably looking at it before bed.

But it’s also very likely bad for your sleeping habits to use your phone as an alarm clock. Most obviously, it’s been well documented that the cool, bright light of a smartphone screen makes it much harder to go to sleep; it stands to reason that if you’re using your phone as an alarm clock you’re much more likely to be using it before bed. But there are also so-called “sleep hygiene” reasons to keep your phone out of your bedroom: the stimulation of flicking through your phone — and of keeping emails from your boss only an arm’s length away all night — is only going to make it harder to relax yourself enough to sleep.

And, face it: Your phone also has no charm whatsoever. Clocks — most of them at any rate — are a really very lovely objects: soothing in their predictability and reliability, comforting in the singularity and simplicity of their purpose, and, in some cases, very well designed. Replacing all the many possibilities of the alarm clock — Digital! Analog! Bright colors! Simple minimalism! Flippy-floppy numbers, you know those ones! — for a black rectangle of a screen laid flat on its back is an abdication.

Also, to see the time on a phone you have to pull out the phone and check it. With an alarm clock you can look at the clock. This is a nice feature.

I’ll admit that I have a thing for clocks. It would not be very difficult for any first-year psychology student to figure out why; I am late for literally everything, all the time, and constantly suffer just enough anxiety about it to feel bad but not enough to get me to actually change my behavior. I keep an extensive collection of watches, almost all Swatch-brand plastic watches of mostly ridiculous patterns and colors from the late 1980s.

One of the nicest things about alarm clocks is that there’s no “best”: They do basically one thing, and most of them do it well enough that your choice is really about personality. (The most popular are often the least interesting: Amazon’s best seller is a boring-ass black rectangle with big red numbers.) If you want one, I highly recommend venturing deep into eBay, Craigslist, or Etsy to find killer, weird alarm clocks: baroque 1950s filigreed silver things that bang little bells, fake-wood-paneled 1970s radio-alarm clocks that feel as though they should play Creedence Clearwater Revival songs and nothing else; minimalist Braun cubes for your mid-century-inspired condo; cartoonish brightly colored Memphis-design-inspired clocks from the 1980s.

Here are a few of my favorites, just to get you started. 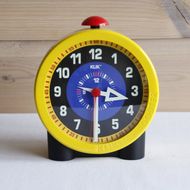 This clock is so rad I might actually buy it myself. It has that Marimekko kind of childlike look that pairs so well with the boring minimalist mid-century furniture that’s trendy now. Also the seller refers to the clock as “he,” which rules. 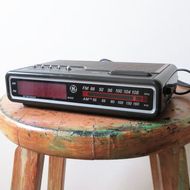 I had this same GE clock when I was a kid, and am just realizing now that it was probably 20 years old when I had it. How did I even get this thing? Incredibly fake-looking wood paneling, big freakin’ snooze button, can wake you up to FM radio. You may have to Google what the FM stations are near you. 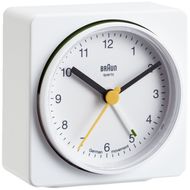 Ah yes, the Braun alarm clock. Classic, clean, simple. This clock tells the world that style is important to you but not enough to get something that isn’t appealing to literally everyone in the world. 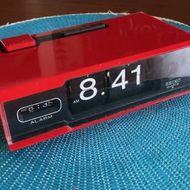 Love the color, love the flippity-floppity numbers, love that there’s a little window that shows you what time the alarm is set for.

Ditch Your iPhone for an Old-fashioned Alarm Clock

THE FEED
2:04 p.m.
early and often
early and often
Debtors Can’t Wait for Biden to Dither
By Sarah Jones
It’s been almost two years without permanent relief.
1:37 p.m.
health
health
What the World Needed Now Was a Monkeypox Outbreak
By Benjamin Hart
Experts say the risk of serious spread is low. Let’s hope they’re right this time.
1:16 p.m.
early and often
early and often
George W. Bush Iraq-Ukraine Gaffe Raises Unanswerable Questions
By Margaret Hartmann
I did not expect the Bush administration to conclude with a Jinx-like confession, and, frankly, I don’t quite know what to make of it.

11:00 a.m.
life after roe
life after roe
I, Too, Have a Human Form
By Irin Carmon
In Justice Alito’s draft opinion, the pregnant body is erased.
10:43 a.m.
the national interest
the national interest
Is the Democratic Party Giving Up Already?
By Jonathan Chait
Defeatism and passivity settle over Washington.
9:59 a.m.
life after roe
life after roe
How the GOP Abandoned Pro-choice Republicans
By Ed Kilgore
Over decades, the Republican Party became uniformly anti-abortion, leaving many pro-choice GOP voters stranded. They could be a problem for the party.
8:00 a.m.
politics
politics
Is the Justice Department Incompetent?
By Ankush Khardori
Federal prosecutors have suffered a string of high-profile losses that point to long-term institutional problems.
5/18/2022
early and often
early and often
Progressives Win Some, Lose Some in House Primaries
By Ed Kilgore
AIPAC and a crypto billionaire’s PAC made waves in multiple House Democratic primaries on Tuesday.
5/18/2022
politics
politics
Poorly Conceived Biden Disinformation Board Put on Pause
By Benjamin Hart
Its embattled leader, Nina Jankowicz, announced her resignation on Wednesday.
5/18/2022
pool party
pool party
The Most Powerful Person in Media Missed the Media Power Person Party
By Shawn McCreesh
But his model mom, Maye Musk, was there.
5/18/2022
early and often
early and often
Idaho Governor Brad Little Fends Off Trumpy Usurper
By Ed Kilgore
In Tuesday’s GOP primary, Little trounced Lieutenant Governor Janice McGeachin, who’d tried repeatedly to cancel his COVID policies.
5/18/2022
politics
politics
De Blasio Still Looking for New Job, Mulls Run for Congress
By Nia Prater
The former mayor previously considered runs for New York governor and the 11th Congressional District.
5/18/2022
early and often
early and often
Trump Wants Dr. Oz to Copy Him and Declare Victory Before the Race Is Called
By Nia Prater
The race between Mehmet Oz and David McCormick has not been called and will likely head toward an automatic recount.
5/18/2022
qanon nation
qanon nation
The ReAwaken America Tour Is the Start of QAnon 2.0
By Laura Jedeed
The conspiracy theory that has gripped the conservative movement is evolving. But into what?
5/18/2022
early and often
early and often
2022 Midterms: A Guide to the Races Worth Watching
By Ed Kilgore
A cheat sheet to keep track of all the crucial races, primary upsets, and campaign drama — Trump-fueled and otherwise — from now through Election Day.
5/18/2022
early and often
early and often
Trump Couldn’t Give Oz a Decisive Win Over McCormick
By Ed Kilgore
Three MAGA-y candidates dominated Pennsylvania’s GOP Senate primary, but Trump’s official pick appears to be headed to an automatic recount.
5/18/2022
the money game
the money game
The Crypto Cult of Do Kwon: ‘If It Was a Ponzi Scheme, They Did a Good Job’
By Kevin T. Dugan
The volatile, charismatic founder created a $60 billion empire by calling people “poor.” It all came crashing down in a couple days.
5/18/2022
games
games
Brittney Griner Still Isn’t Getting Enough Attention
By Will Leitch
As a trumped-up trial in Russia looms, her case remains curiously under the radar.
5/17/2022
early and often
early and often
Madison Cawthorn’s Self-destruction Is Complete
By Ben Jacobs
The youngest Republican representative in history lost on Tuesday following a series of bizarre scandals.
5/17/2022
early and often
early and often
Cargo Shorts Enthusiast John Fetterman Wins Democratic Senate Race
By Nia Prater
He won days after suffering a stroke and may be Democrats’ best hope for flipping a Republican senate seat.
5/17/2022
the truth is in here
the truth is in here
Pentagon: UFOs Are Everywhere, Aliens Not So Much
By Benjamin Hart
At the first congressional hearing of its kind in more than 50 years, officials said that sightings of unidentified objects have skyrocketed.
5/17/2022
covid-19
covid-19
How to Order More Free Home COVID Tests From the Government
By Margaret Hartmann
U.S. residents can now order a third batch of eight free COVID-19 tests from the federal government. Here’s how to claim them.
5/17/2022
politics
politics
Biden Condemns White Supremacy As ‘Poison’ During Speech in Buffalo
By Nia Prater
The president and First Lady visited Buffalo to pay their respects in the aftermath of a racist rampage that left ten people dead.
5/17/2022
what we know
what we know
What We Know About the Racist Attack at a Buffalo Supermarket
By Chas Danner
As the city mourns the ten Black victims murdered in the attack, troubling details about the white supremacist gunman continue to emerge.
5/17/2022
early and often
early and often
Generic Ballot Shows Republicans on Track to Retake House
By Ed Kilgore
The reliable indicator shows Republicans with a modest but steady lead. If 2022 is anything like recent midterms, the House will flip for sure.