Earlier this week, a Snapchat-birthed relationship between two students at the University of Wisconsin-Madison took over the internet’s collective mind. (You can read our interview with the couple here.)

Now, it’s allegedly happening again with the Utah State Snapchat campus story (a public aggregation of snaps from students). Only this time, the whole thing ends with a dance battle and several hundred students singing the campus fight song.

Snapchat stories are usually geofenced, meaning you can only see them from a specific area, like a college campus. But the Utah State story is currently visible under Snapchat’s Live stories, so those of us who aren’t students there can see it for the 24 hours it’ll be live on the app. (Again, hmmmmm.)

First, we meet a blonde female student, dubbed “Spoiler Girl,” who ruins everyone’s day by posting videos explaining the endings of famous movies. In this case, she details the ending of 2001’s Shrek. 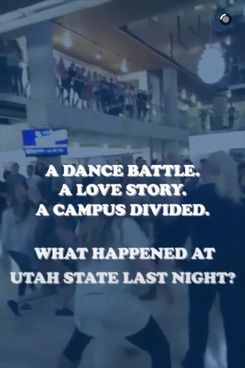 Next up, a student enraged by Spoiler Girl’s actions decides that the campus needs to stage some kind of intervention to keep her from spoiling again. Another student chimes in and proposes the intervention be a “silent dance battle” between students who are for and against the spoiler snaps. (More on this later. For now, just: Hmmmm.)

Meanwhile, somewhere else on the Snapchat-filtered hellscape I am envisioning as the Utah State campus, an unsuspecting guy named Trevor sends a snap about studying for his investment banking final to the campus story. Another female student sends him a good luck snap, while her friend, Madison, shouts “you’re hot” from the backseat of a car.

Of course, Trevor doesn’t know Madison is Madison (Does anybody in college use Facebook anymore?). Instead he calls her “Mystery Car Girl” and the two coordinate a date for the evening, meeting up for ice cream before the dance battle.

From there, the happy couple heads to the library for the dance battle. (Which, in case you’ve forgotten, concerns the ending of a 15-year-old children’s movie). Based on the snaps, it appears easily 100 students showed up to dance and cheer on their classmates. Trevor and Madison deem themselves the unofficial judges of the event, ruling in favor of “Team Spoiler” after several minutes of painful gyrating. Then they kiss while their classmates hoot, holler, and round out the evening with a rousing chorus of the school song, like the sequel to the sequel to High School Musical.

Now, we’re not saying the stunt was orchestrated by Snapchat (we’ve reached out to the company and will update this story if we hear back). We’re not even saying that it’s fake. We’re just saying, you know: One week after a mega-viral Snapchat romance, another one, involving a dance-off, appears?

Look, that now-viral Snapchat story from the University of Wisconsin, was sentimental pap, yes. But it was charmingly sloppy sentimental pap. It was authentic sentimental pap. Also, it was first. If you want to go viral with your romance, try a different app. (Down to Lunch?)

THE FEED
9 mins ago
covid-19
covid-19
Where to Get Home COVID Tests and Why They’re So Hard to Find
By Margaret Hartmann
Here are all your current options, including where tests are in stock, insurance reimbursement, and how to get free tests from the government.
9:51 a.m.
covid-19
covid-19
How to Get Free N95 Masks From the Government
By Chas Danner and Margaret Hartmann
Starting this week, the Biden administration will distribute 400 million free N95 masks. Here’s everything we know about the program.
9:00 a.m.
our climate
our climate
Toward an Energy Democracy
By Olúfẹ́mi O. Táíwò
Why political transformation is necessary to combat climate change.

8:00 a.m.
2022 midterms
2022 midterms
Democrats Need Republican Mistakes to Hang On to the Senate
By Ed Kilgore
A normal midterm swing could help Republicans sweep close Senate races. But Trump and intraparty problems could help Democrats keep control.
7:00 a.m.
the intelligencer profile
the intelligencer profile
Was Larry Summers Right All Along?
By Eric Levitz
How the ultimate Establishment figure became the preeminent critic of the Biden era’s economic consensus.
1/23/2022
the law
the law
Biden’s Monopoly Games
By Ankush Khardori
Biden’s team was supposed to bring a shift in antitrust thinking, but its leaders sound a lot like the traditionalists they were supposed to replace.
1/23/2022
business
business
How Museums Are Trying to Figure Out What NFT Art Is Worth
By Kevin T. Dugan
Among other complexities, the often secretive process for establishing the insured value of a painting doesn’t work with a Bored Ape.
1/22/2022
new york city
new york city
What We Know About the Shooting of Two NYPD Officers in Harlem
By Intelligencer Staff
Officer Jason Rivera, 22, was shot and killed in the line of duty in Harlem on Friday. Officer Wilbert Mora, 27, remains in critical condition.
1/22/2022
politics
politics
Biden Didn’t Have the Power or Luck to Become FDR or LBJ
By Ed Kilgore
Biden is trying to govern in an era totally unlike the 1930s or 1960s with little margin for error and a lot of nasty surprises. Give him a break.
1/21/2022
wall street
wall street
The End of the Pandemic Boom Is Nigh
By Kevin T. Dugan
Netflix, Peloton, and other Wall Street winners of the pandemic economy are running out of steam.
1/21/2022
the city politic
the city politic
Everyone Needs to Take a Deep Breath About Alvin Bragg
By Errol Louis
His criminal-justice reforms have prompted a freak-out, but they’re reasonable — and exactly what he promised.
1/21/2022
aviation
aviation
5G Will Not Make Your Plane Fall Out of the Sky
By Jeff Wise
Why did U.S. airlines fly into a panic over this?
1/21/2022
the national interest
the national interest
Trump Unable to Grasp Hannity’s ‘Banging Head Against Wall’ Metaphor
By Jonathan Chait
Former president thinks he’s being asked about literal wall.
1/21/2022
encounter
encounter
Is the Next Great Pastime … Pickleball?
By Giri Nathan
Connor Pardoe wants to turn the racquet sport, once a game for retirees, into a primetime event.
1/21/2022
criminal justice
criminal justice
Is Solitary Confinement Here to Stay at Rikers Island?
By Matt Stieb
The movement to ban it slammed into a wall of opposition, first from Bill de Blasio and now from Eric Adams.
1/20/2022
election coup
election coup
The Election Law Central to January 6 Might Actually Get Fixed
By Ed Kilgore
Both Mitch McConnell and Kevin McCarthy are “open” to reform of the Electoral Count Act.
1/20/2022
literature
literature
Trump Invites Congress to Election-Lie Book Club
By Margaret Hartmann
Sending every House Republican a book about the “rigged” election just makes him look desperate.
1/20/2022
politics
politics
Never Mind the Facts. Trump Fans Feel Like a Majority
By Ed Kilgore
When you’ve been convinced polls are fake and actual elections are rigged, it is easy to confuse visible signs of enthusiasm as a ticket to power.
1/20/2022
questions
questions
Can I Eat M&M’s Without Having to Think About Their Personalities?
By Sarah Jones
Corporate America has gone too far.
1/20/2022
havana syndrome
havana syndrome
CIA: (Most) Havana Syndrome (Probably) Not Caused by Foreign Attack
By Margaret Hartmann
The agency’s interim findings bolster the “mass sociogenic illness” theory but are frustratingly inconclusive.
1/20/2022
politics
politics
Of Course, Eric Adams Is Turning His Paycheck Into Crypto
By Kevin T. Dugan
The mayor once talked about getting paid in bitcoin, but he’ll have to settle for the next best thing.
1/20/2022
labor
labor
Miners vs. Vultures
By Sarah Jones
A lengthy strike calls attention to the practices of private equity.
1/20/2022
the national interest
the national interest
The Filibuster Is Living on Borrowed Time
By Jonathan Chait
Mitch McConnell wants you to think the fight is over. It’s not.
1/20/2022
games
games
The Decade That Defined the Knicks
By Will Leitch
Talking with Chris Herring, whose new book looks back at the ugly-great teams of the 1990s.
1/20/2022
build back better
build back better
Give Manchin What He Wants Already
By Eric Levitz
Before Democrats give up on passing Biden’s climate agenda, they should see if the West Virginia senator will take yes for an answer.