In 2007, Michelle Rhee took over as chancellor of the District of Columbia public school system. In part because her policies were radical, and in part because she expressed her views in an abrasive fashion, and in part because she worked in a major media center, Rhee became the face of education reform, and, consequently, the number-one enemy of teacher unions. Rhee imposed sweeping reforms to introduce measurement and accountability into the schools, including a controversial new teaching contract, which gave every teacher a 20 percent raise, and allowed them to become eligible for large performance bonuses if they gave up the tenure protections that made it difficult to fire them.

Trump’s Lies and Trump’s Authoritarianism Are the Same Thing
Education Reform Is Not That Popular, But It’s Still Working
Why Democrats Have Popular Presidents and Republicans Don’t

For teacher unions and their supporters, Rhee remains the premier antagonist, where her name remains a curse word. Erik Loomis laments that the Obama administration still “believes in Rheeism.” Casey Quinlan, writing for ThinkProgress, castigates the Obama administration for citing D.C. reforms as a model. Bruce Vail has a whole article for In These Times lamenting the fact that Rhee’s successor, Kaya Henderson, has continued her policies (quotes from union sources: “[Rhee] is still here, but in the form of Kaya Henderson”; “It’s Rheeism without Rhee,” etc.)

But here is an odd thing that none of these sources mention: Rhee’s policies have worked. Studies have found that Rhee’s teacher-evaluation system has indeed increased student learning. What’s more, the overall performance of D.C. public school students on the National Assessment of Education Progress (NAEP) has risen dramatically and outpaced the rest of the country. And if you suspect cheating or “teaching to the test” is the cause, bear in mind NAEP tests are not the ones used in teacher evaluations; it’s a test used to assess national trends, with no incentive to cheat. (My wife works for a D.C. charter school.)

Some critics have suggested that perhaps the changing demographics in Washington (which has grown whiter and more affluent) account for the improvement. Kristin Blagg and Matthew Chingos at the Urban Institute dig into the data, and the answer is: Nope, that’s not it. The amount of improvement that would be expected by demographic change alone (the blue bars) is exceeded by the actual improvement (the gray bars): 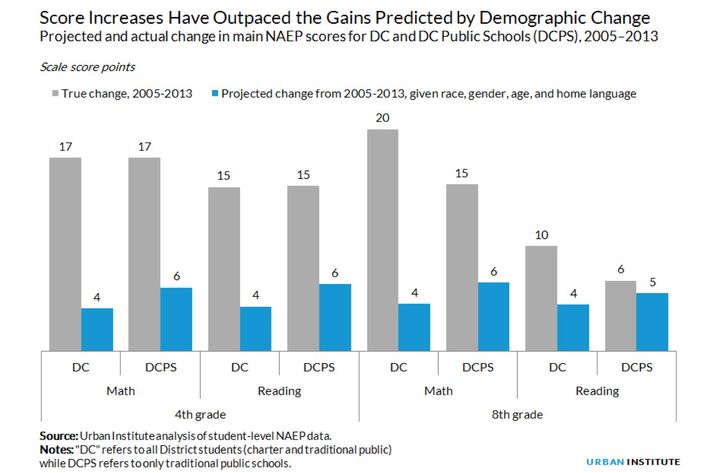 This is important because Hillary Clinton is facing intense pressure to back away from the Obama administration’s pro-reform agenda. That pressure is coming from sources that regard the actual outcome of education policy for students to be a trivial question unworthy of consideration — both ThinkProgress and In These Times treat the position of teacher unions as ipso facto correct, and education policy solely as a question of labor rights for employees rather than as a vital component of an economic-mobility strategy. They don’t claim Rhee’s policies failed to improve student outcomes. They simply ignore the question. Loomis does assert, “alleviating poverty is far and away the most important piece of the solution to school inequality,” — a common aphorism among left-wing critics, which conveniently allows him to avoid mentioning the actual, measured improvements brought about by the education-reform policies he denounces.

If you believe education policy should be designed to increase learning and economic opportunity for low-income children, then Washington, D.C., is a model that should be emulated. If you believe, on the other hand, that education policy should be designed to maximize employment security for teachers, then Washington, D.C., is a failure and a cautionary tale. The dramatic improvements registered in places like Washington show the revolutionary possibilities of education reform, and the continued resistance to it in the face of proven success reveals the political threat it will continue to face.

THE FEED
8:00 a.m.
early and often
early and often
The Data-Driven Strategy Behind Democrats’ State-Level Success in 2022
By Eric Levitz
The president’s party almost always loses state-level power in midterm elections. Here’s how Democrats bucked that trend last year.
1/26/2023
what we know
what we know
5 Memphis Cops Arrested for Murder of Tyre Nichols
By Chas Danner
Footage of Nichols’s arrest and “savage” beating will be made public Friday.
1/26/2023
the talented mr. santos
the talented mr. santos
Here’s Every Single Lie Told by George Santos
By Matt Stieb
Navigating the many exaggerations and falsehoods of New York’s newest representative.

1/26/2023
early and often
early and often
Brian Kemp for President Makes a Lot of Sense
By Ed Kilgore
Georgia’s governor doesn’t have the warmest personality. But in trouncing both Donald Trump and Stacey Abrams, he showed world-class political chops.
1/26/2023
master of the garden
master of the garden
James Dolan on Blacklisting His Enemies: I Have Rights, Too
By Matt Stieb
The MSG owner defended his use of facial recognition to ban lawyers who have sued him in a highly entertaining local-TV rant.
1/26/2023
screen time
screen time
How Much Does Unbanning Trump Really Matter?
By John Herrman
On the internet, you can never really go back home.
1/26/2023
2024 senate races
2024 senate races
Adam Schiff Runs for Senate on the Enemies He’s Made
By Ed Kilgore
Trump and Republicans inadvertently elevated a mild-mannered moderate who is taking his shot at Dianne Feinstein’s seat.
1/26/2023
just asking questions
just asking questions
Why the College Rankings Are Getting Less and Less Relevant
By Benjamin Hart
Former college president and longtime rankings critic Colin Diver on U.S. News & World Report’s moment of reckoning.
1/26/2023
the national interest
the national interest
Ron DeSantis’s Long War on Black Political Power
By Jonathan Chait
It’s not just a “culture war” — it’s about political representation.
1/26/2023
chinese democracy
chinese democracy
The Radical, Lonely, Suddenly Shocking Life of Wang Juntao
By Christopher Beam
After half a century of resisting the Chinese Communist Party, a dissident confronts murder and espionage in Queens.
1/25/2023
early and often
early and often
Marjorie Taylor Greene’s Desperate Plan to Be Trump’s Vice-President
By Ed Kilgore
MTG just got her first committee assignments and can’t control her mouth, but she might be on Trump’s shortlist. He’d be nuts to pick her.
1/25/2023
tremendous content
tremendous content
Why Jeff Bezos and Lauren Sánchez Are Relationship Goals
By Margaret Hartmann
Think they’re just disgustingly wealthy? Think again! Sánchez’s ‘Wall Street Journal’ Q&A reveals they’re hardworking, humble, and totally adorable!
1/25/2023
early and often
early and often
Trump’s Terrified 2024 Rivals Show It’s His Race to Lose
By Ed Kilgore
Republicans’ reluctance to enter the presidential race is telling, and the longer they wait, the more likely Trump’s renomination becomes.
1/25/2023
wyd
wyd
Trump Has Reportedly Discovered the Modern Magic of Texting
By Matt Stieb
Welcome to 2023, sir.
1/25/2023
sports
sports
Something’s Still Not Quite Right at the Baseball Hall of Fame
By Ben Jacobs
Barry Bonds and Roger Clemens are finally off the ballot, but the steroid era’s influence lingers.
1/25/2023
war in ukraine
war in ukraine
U.S. Tanks Are on Their Way to Fight Russians in Ukraine
By Matt Stieb
It may be Washington’s biggest escalation, though Biden downplayed the move.
1/25/2023
politics
politics
New Yorkers Will Get to Vote on Their Own Equal-Rights Amendment
By Nia Prater
Lawmakers passed legislation that would add new protection classes to the state’s constitution.
1/25/2023
early and often
early and often
Pat Buchanan, a Vindicated Extremist, Packs It In
By Ed Kilgore
A man who once seemed marginalized is now a MAGA prophet who is retiring with a lot of malign accomplishments.
1/25/2023
poll positioin
poll positioin
Why Republicans Won’t Name Their Debt-Ceiling Demands
By Ed Kilgore
Polls show the public agrees with the GOP on the need for spending cuts — but only if it keeps its proposals abstract.
1/25/2023
the system
the system
The Uprising That Ran Out
By Zak Cheney-Rice
The death of Keenan Anderson marks the end of an era.
1/24/2023
early and often
early and often
Centrist House Democrats Picked a Bad Time to Have an Identity Crisis
By Ed Kilgore
With Congress closely divided, the Blue Dog Coalition could be having a moment. Instead, it’s falling apart over a proposed name change.
1/24/2023
tremendous content
tremendous content
Did Trump Really Teach ‘Rocket Man’ Kim Jong-un About Elton John?
By Margaret Hartmann
Trump and Pompeo’s claims about their 2018 meeting with the North Korean dictator don’t totally check out. But it’s still a good story.
1/24/2023
artificial intelligence
artificial intelligence
AI Journalist Plagiarized More Than a High-School Student
By Benjamin Hart
Sometimes robots commit very human errors.
1/24/2023
everybody wants some
everybody wants some
Mike Pence Also Had Classified Documents at His House
By Matt Stieb
At this point, which former executive-branch leaders haven’t done this?
1/24/2023
the talented mr. santos
the talented mr. santos
There Is One Thing George Santos Didn’t Lie About
By Nia Prater
One of New York’s first COVID-19 cases is now a U.S. representative.