You know what they say: “Hell hath no fury like a scorned Game of Thrones–loving woman.” According to a now-deleted post, a 29-year-old Redditor, after cheating on, and subsequently breaking up with, his girlfriend (“we’ll call her Dany”), finds that his now-ex has decided to wage war every week by ruining something they used to enjoy together: Game of Thrones.

He says Dany has blocked him on all social media, but briefly unblocks him every Monday to spoil major plot points. And to make sure he sees them, the Redditor says she keeps changing up her platform of choice. Dany’s used WhatsApp, Facebook, and has even borrowed a mutual friend’s cell phone to send text messages. (We’re a little confused as to why this guy keeps falling for the same shtick, but, then again, he did turn to Reddit for relationship advice.) 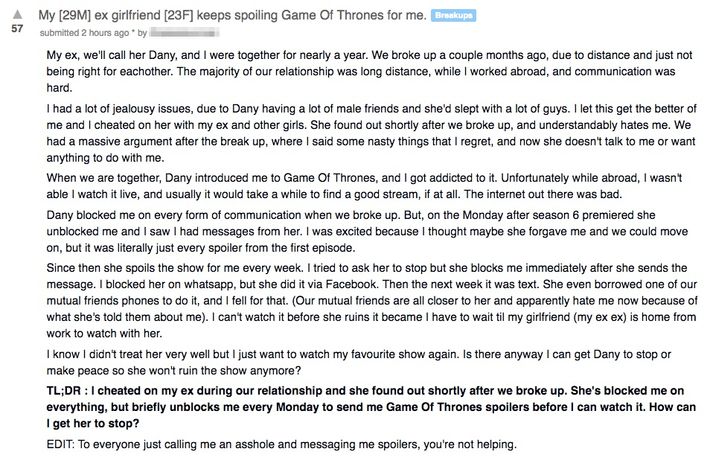 Before the thread was removed, plenty of other Redditors weighed in, but they weren’t offering the technical advice the OP was hoping for. Instead, plenty of GOT jokes and insults were bandied about. (Warning: Spoilers ahead.)

“I think I expected a bit of advice? I read /r/relationships a lot and I expected a bit of flack because of the cheating but it’s been pretty much all flack,” the Redditor told me of the immediate and unfriendly responses he received. (Flack? For cheating? I’m stunned.) “I’ve no idea why it was shut down. A lot of people were giving me shit but there was also a lot of GOT spoilers. Maybe that’s why.”

“She spoiled everything that happened basically. The Hodor one this week was probably the most annoying,” he said. (Though lets just go on the record saying that finding out your boyfriend cheated on you with several other women is likely more “annoying” than a ruined episode of television. But, hey, what do I know?) “I assumed Jon would come back but she spoiled when, so that pissed me off, too. And Stannis being confirmed as dead, because I thought he was alive.”

As for proving this whole thing isn’t the work of an elaborate internet troll, the Redditor says it all “really happened,” but that he has no interest in trying to prove it. “I don’t care if people think it’s a joke. At this point I kind of hope people do think it’s a joke so they’ll stop messaging me,” he said.

This Is the Best Way to Get Revenge on an Ex