Last week, the video game website Polygon posted a video entitled “DOOM GAMEPLAY - The First Thirty Minutes” — a preview of the new Doom game that came out on Friday:

If you’ve played a lot of first-person shooters (FPS), you may have noticed that whomever Polygon asked to record this video is — what’s the term I’m looking for here — pretty bad. Generally speaking, FPSs require a version of a drummer’s dexterity: both your hands need minds of their own, in a sense, with one of them controlling your player’s strafes and forward-and-backward movement and the other keeping your cursor trained on whatever you’re trying to kill at the moment. This is particularly true for FPSs like Doom, which favor a run-in-guns-blazing approach, as opposed to those with heavier stealth and tactical elements.

The Irrelevant-GIF Outrage Cycle Is Making Everyone Dumber
Dearborn Muslims Protested ISIS, and You Can Probably Guess What Happened Next

In short, if you’re not constantly strafing and shooting and backpedaling and — more rarely — charging in a game like Doom, you’ll be dead pretty soon. And there’s little of that frenetic, deft movement in the Polygon video: The player seems to have trouble with the basic tenets of first-person-shooter-y, and in a manner which screams noob: Their performance is roughly equivalent to that of a basketball player who is unaware of the concept of two-steps-in-motion, and who therefore comes to a complete stop prior to every time they pass or shoot.

Now, any such video released by a major gaming outlet would invite some level of ridicule, but if you look around at the response to this one in particular, it’s clear that things are a bit saltier than usual. And that salt is peppered (sorry) with a bit of a political message: 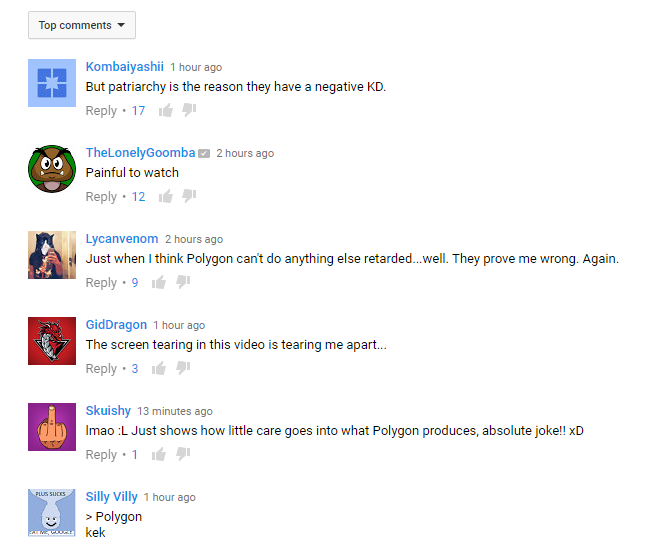 What’s going on here? You guessed it: Gamergate fallout.

As far as its adherents are concerned, the chief revelation of the Gamergate “scandal” was the deep-seated corruption of the mainstream gaming press — in particular, the websites Kotaku and Polygon. The reasons are varied and mostly dumb; Gamergate did identify a couple incidents in which writers should have disclosed relationships to developers they were writing about, but nothing that comes close to explaining the movement’s outrage and obsession with certain key targets. Eventually the specifics of the originating “scandal” (which are so small-bore and petty I would feel dumb trying to explain them), fueled largely by conspiracy theory and exaggeration and the other stuff that happens when a bunch of gamers suddenly decide they are experts in journalism, blew up into something bigger, broader and, well, culture-war-ier. Forget any of the stuff about journalistic ethics with respect to developer relations: The chief idea of Gamergate is that gamers are a poor persecuted group who just want to play vidya and read “unbiased” reviews and news, and Kotaku and Polygon represent a social-justice warrior cabal with a political agenda, who want to take those games away.

This argument should sound familiar, because it’s a warmed-over, video-game-focused retread of good old reactionary distrust of mainstream media. In much the same way conservatives claim that the Washington Post and the New York Times and other outlets are hopelessly left-wing and therefore untrustworthy, Gamergaters insist that Kotaku and Polygon (and sometimes IGN and other big outlets that touch on technology and video games — BuzzFeed is one major target of their ire) are hopelessly compromised by their supposed political obsessions with social justice.

Which brings us back to the Doom Let’s Play. To Gamergaters and their sympathizers, this video, bad and incompetent as it was, was the world’s best, most delectable ice cream sundae: “proof” of the theory that Polygon doesn’t really care about video games — not like real gamers do. Polygon’s writers can’t even competently play an FPS for 30 minutes!

Thus, the schadenfreude-fueled commentary about the video; thus, the inevitable YouTube responses, some of them admittedly funny:

In reality, Polygon is — to my mind at least — a good, smart gaming site, and anyone who wants gaming taken seriously should celebrate the fact that games journalists are starting to analyze games’ political messages more critically.

But still: That was a sad, sad Doom performance. You can strafe and shoot at the same time, dammit!

Why a ‘Doom’ Video Became a Culture-War Issue