Airbnb has a race problem. Black users have had rentals declined by hosts for no reason other than their race; some have had the police called on them while in the midst of a rental. These stories and others have been shared on Twitter with the hashtag #AirbnbWhileBlack, and a man named Grergory Selden has even filed a lawsuit against the company, arguing it violated the federal Civil Rights Act.

As Selden’s lawsuit winds its way to conclusion, Ronnia Cherry, Stefan Grant, and Rohan Gilkes have put together a Silicon Valley–style solution: short-term rental platforms created specifically for and by people of color, as a means to circumvent the racial discrimination that nonwhites, particularly black people, face on Airbnb. There’s just one small hiccup: Gilkes founded a website called noirebnb.com, while Cherry and Grant started one named noirbnb.com. As of yet, the site’s founders say they will not be joining forces.

Cherry, Grant, and Gilkes came up with the idea for an Airbnb for the POC community independently, each spurred on by encounters with racism while using the original service. For Cherry and Grant, it was having the police called after neighbors spotted them in an Airbnb rental in Georgia last October. (Cherry is a strategist, producer, and designer. Grant is an event coordinator and performer. The two were in Georgia working on a music festival.) “The cops thought we were robbing the place,” Grant said. “They showed up guns drawn. Luckily, we were able to deescalate the situation. We took a selfie and turned it into something positive.”

Yo! The Air B&B we're staying at is so nice, the neighbors thought we were robbing the place & called the cops! 😂 pic.twitter.com/XUQjuyCXMO

This May, Gilkes tried to book a room on Airbnb in Idaho for the Fourth of July. After his would-be host told him the dates were no longer available, he tried, and failed, to book the room for a different weekend. When Gilkes asked a white friend to book the same dates, “well, you can probably guess what happened … my friend was able to book the room,” he said. (Gilkes penned a Medium essay about the incident, which you can read here.)

Both Grant’s selfie and Gilkes’s essay quickly went viral, spurring responses from Airbnb. The company apologized to both parties, offering free stays to make up for what happened. Gilkes told me he declined the offer, and Cherry and Grant said they “knew that wasn’t going to solve the bigger issue.” (They were right, given that their bad experience predated Gilkes’s by about six months.)

Airbnb seems to have recognized the challenges it faces: It just announced a new diversity-hiring initiative (Airbnb’s staff is 63 percent white), in what seems like an attempt to undo some of the bad press the company has seen of late (including Selden’s lawsuit); the company also publicly banned two hosts this month for harassing black and transgender travelers. Meanwhile, a Harvard study found people with African-American–sounding names have a harder time booking on the platform.

But Gilkes, a tech entrepreneur by trade, says Airbnb’s response to his essay was “too little, too late.” “When I started getting all these emails from people — black people, trans people, gay people — who were all going through the same thing, I felt like I had an obligation to do something,” Gilkes told me. He started working on Noirebnb this spring. 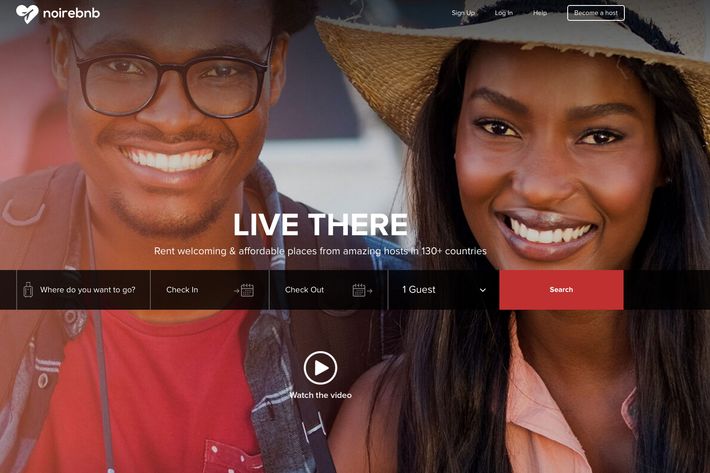 Cherry and Grant started planning Noirbnb in early November 2015. When they reached out to Airbnb about their project, the company flew the pair to San Francisco to discuss it. “We gave them the full pitch for the site and told them our main goal was to make sure these situations never happened again,” Grant said. “We told them we foresaw more of these discrimination issues happening in the future. This was before #AirbnbWhileBlack happened.” Still, Cherry and Grant say Airbnb didn’t prioritize their proposal. “Airbnb thought these issues would go away, but instead they’ve just gotten bigger,” Cherry said. “We decided to do it on our own after we realized Airbnb wasn’t going to be directly tackling the issues.”

And while each site will cater to people of color, they both plan to welcome all people looking for a safe and inclusive travel experience. (Neither party provided explicit ways they will enforce this inclusivity, but Cherry said Noirbnb is being designed to “educate and empower,” while Gilkes said Noirebnb will feature “strong discrimination policies.”)

Both websites are currently accepting names, but aren’t operational yet. Cherry and Grant’s site went live last Friday and they already have numbers “in the thousands,” while Gilkes’s hit the web on Saturday and “over 23,000 people have already inquired.” (Airbnb declined to comment on either site.) “Prior to Friday, we had been holding the domain name and working on our backend,” Cherry explained. “When we announced [on Friday], another company with a similar name, Noirebnb, contacted us.” 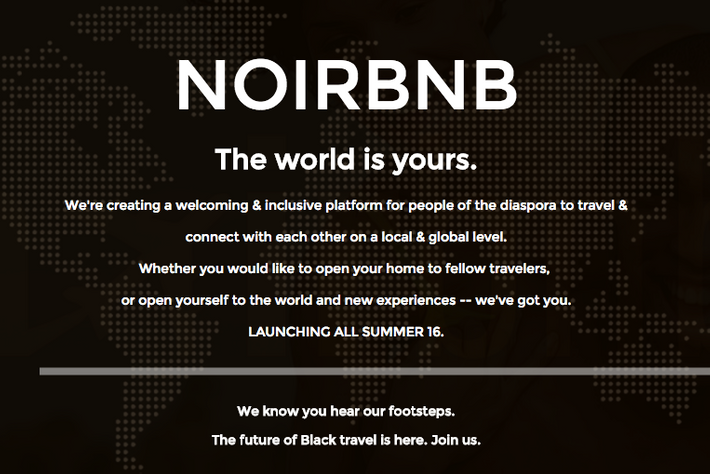 The two sites have been in discussions since last Friday, but have not come to any agreement about joining forces. “Initially we were ready to merge together, but we’ve had to take some steps back as a business to make sure it makes sense for us,” Cherry said. “Merging is something that could happen, but if it doesn’t happen, we’re going to keep moving independently,” Gilkes said of his website. For Cherry and her team, moving past the name debacle can’t happen quickly enough. “It’s just been distracting from the main issue at hand, solving the racial discrimination problem,” she said.

A bigger problem might be money. Noirbnb is “still in the seed phase,” and Gilkes is currently bootstrapping his site, which he said should be operational in six to eight weeks. While all are optimistic, finding VC money can be difficult for founders of color. (A 2010 data study found that 87 percent of VC-backed founders are, not surprisingly, white.) Given that Airbnb’s business model operates in a bit of a legally gray area (most New York City residents who rent on the site are effectively breaking the law), capital is going to play a key role if either of these websites is to succeed. Disrupting the hotel industry and fighting housing laws costs some serious cash. (By comparison, Airbnb is valued at over $25 billion.) Creating businesses that cater to people of color is one way to counter the sharing economy’s race problem — but only if you can create those businesses in the first place.

THE FEED
4:17 p.m.
abortion
abortion
Texas Abortion Law Likely to Stay in Place Until Court Deals With Roe v. Wade
By Ed Kilgore
All roads now appear to be converging on the Supreme Court’s big upcoming decision.
1:05 p.m.
pivot
pivot
Facebook May Be Mendacious, But It’s Not Stupid
By Intelligencer Staff
A company name change could serve Mark Zuckerberg’s interests well.
12:30 p.m.
mike pence
mike pence
For Mike Pence, Running a Doomed Presidential Race Is a Living
By Ed Kilgore
The former veep doesn’t have to be a plausible presidential candidate to stay on the gravy train.

12:25 p.m.
the city politic
the city politic
City Hall Starved Taxi Drivers Before They Went on Hunger Strike
By Errol Louis
How driving a cab became a dead end.
12:12 p.m.
explainer
explainer
What to Know About Booster Shots, Now
By Paola Rosa-Aquino and Chas Danner
Countless Americans are now eligible for a booster dose of any of the three U.S.-authorized COVID vaccines.
11:25 a.m.
public safety
public safety
The Police’s Farcical War on Vaccine Mandates
By Zak Cheney-Rice
It turns out cops may not have a special appreciation for the sanctity of life after all.
10:03 a.m.
politics
politics
Anybody Can Be Joe Manchin Right Now
By Ben Jacobs
A clutch of Democrats threaten to torpedo Biden’s agenda unless he agrees to lower taxes for middle-class blue-staters.
8:00 a.m.
build back better
build back better
The Democrats Have a Collective-Action Problem
By Eric Levitz
Can Joe Biden’s agenda survive the competing claims within his own party?
6:38 a.m.
covid-19
covid-19
Booster Shots Are Now Approved for All of the COVID Vaccines
By Nia Prater
Additional dose recommended for all with J&J and many who got Moderna, with “mix and match” allowed for all varieties.
12:07 a.m.
new york
new york
Chuck Schumer Endorses India Walton for Buffalo Mayor
By Matt Stieb
A major Establishment boost for the socialist candidate.
10/21/2021
rikers island
rikers island
New Photos Show Horrific Overcrowding at Rikers Island
By Matt Stieb
Pictures obtained by the New York Post show up to 26 men held in a cell meant for a single detainee amid deteriorating pandemic conditions.
10/21/2021
the money game
the money game
What’s the Deal With Donald Trump’s SPAC?
By Michelle Celarier
After a surprise announcement, a Trump-linked stock skyrocketed — tripling in price and drawing in waves of retail investors.
10/21/2021
the sports section
the sports section
Baseball Teams Should Get to Pick Their Playoff Opponents
By Joe DeLessio
It’s much more fair-minded than the current system — and much more fun.
10/21/2021
the economy
the economy
Behold the Insane Traffic Jam at the Port of Los Angeles
By Benjamin Hart
The supply-chain crisis, up close.
10/21/2021
politics
politics
House Holds Steve Bannon in Criminal Contempt for Refusing to Testify About 1/6
By Nia Prater
The Justice Department will decide whether to charge him over his refusal to testify in the Capitol riot investigation.
10/21/2021
facebook
facebook
The Next Facebook Will Be an Endless Prison for Humanity. I Can’t Wait.
By Choire Sicha
Building the future one headset and wallet at a time.
10/21/2021
joe manchin
joe manchin
Is Manchin Considering Quitting the Democratic Party?
By Ed Kilgore
The West Virginian wants to issue a credible threat to Democrats to increase his leverage in negotiations over Biden’s agenda.
10/21/2021
sports
sports
Boston Celtics Games Blocked in China After Kanter Calls for a ‘Free Tibet’
By Nia Prater
In a nearly three-minute video, Kanter called Xi Jinping a “brutal dictator” and called for Tibetan independence.
10/21/2021
politics
politics
Trump’s ‘Truth Social’ Bans Telling Truth About His Twitter Rival
By Benjamin Hart
It’s a place where “tweets” are called “truths,” but mockery of the former president’s social-media site is not permitted.
10/21/2021
the national interest
the national interest
Biden Has Two Long-Shot Plans to Placate Kyrsten Sinema
By Jonathan Chait
Hail Mary time.
10/21/2021
racial justice
racial justice
Smearing Popularism Does Not Help Black Voters
By Eric Levitz
Persuasively rebutting David Shor requires scrutinizing his arguments, not stigmatizing them.
10/21/2021
power
power
Katie Couric Is Not for Everyone
By Rebecca Traister
After her long career as America’s beloved morning-news anchor, she has decided to write a wild, unflinching memoir focused on the messy parts. Why?
10/21/2021
the city politic
the city politic
Will Buffalo Elect a Socialist Mayor?
By Ross Barkan
It depends on the success of the incumbent’s extremely unusual write-in campaign.
10/21/2021
crime
crime
What It Was Like to Face the Monster of Sarah Lawrence
By James D. Walsh
My encounters with Larry Ray.
10/20/2021
nyc mayoral race
nyc mayoral race
Key Moments From the First New York City Mayoral Debate
By Matt Stieb
Highlights and noted insults from the first contest between Democratic front-runner Eric Adams and Republican long shot Curtis Sliwa.