Franki and I send our thoughts & prayers to the victims of today's horrific violence and their loved ones.

Our thoughts and heartfelt prayers go out to the victims of this horrific tragedy in Orlando, and to their friends and families. #utpol

And while thoughts and prayers are fine if you’re into that sort of thing, they do absolutely nothing to change gun-control policy so that events like the shooting at Pulse do not happen again. (And again. And again.) It’s a point political-game website GOP Arcade is making with its newest game, Thoughts and Prayers. Users play the game by pressing the “T” and “P” keys on their keyboards. Each keystroke represents one thought or prayer, while a map of the United States shows victim counts from shootings across the country. 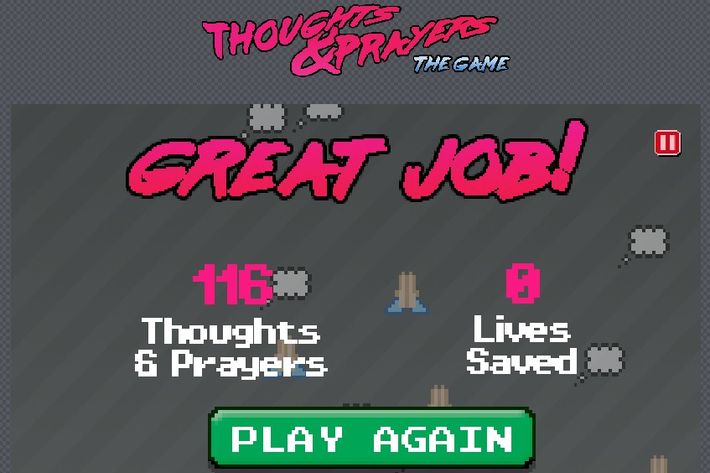 Players get 30 seconds, at the end of which they are shown how many thoughts and prayers they were able to send off in half a minute and how many lives they saved. When I played, I scored 116 and 0 respectively. Which, coincidentally, is the exact same number of lives that have been saved by politicians and people offering thoughts and prayers as a solution to gun violence in lieu of voting for stricter laws on background checks or reaching out to their elected officials.