An email from the Obama campaign arrived in my in-box earlier today — one of those daily messages whose arrival has been a constant for nearly a decade. You never know who the sender will be these days — one day it’s Dr. Jill Biden; the next week, it will most certainly be J.R. Smith — but today’s was from the deputy digital director for Organizing for Action. And it’s the best email I’ve ever received from the Obama campaign. Let the record show that June 29, 2016, was a great day in political donation LISTSERV pop-culture-reference history. We’re going to be talking about this one for a while.

The email comes out the gate on fire, pure summertime-Santana “Smooth” levels of hot. The first line:

“I get teased a lot for not knowing much about pop culture. Just recently, someone had to explain to me who Drizzy was – years after his songs reached Top Ten status. (For those in my boat: Google “Drake” and save yourself from this embarrassment.)”

We’ll go on in a moment, but I want you to remember that line: “Google ‘Drake’ and save yourself from this embarrassment.”

“If I paid more attention, maybe I wouldn’t shift so awkwardly in my seat every time someone quotes a song with a look of shared understanding (I wish I had any idea what you’re talking about, friend). But pop culture just isn’t my thing.”

I’m genuinely loving this, but I’m getting the sense this isn’t just an email from an Aubrey fan sent out to the entire OFA mailing list. Surely there’s a catch?

“If there’s one thing I do pay attention to, it’s the work OFA volunteers are doing to lead their communities forward.”

It goes on for a few more lines, followed by a link asking me to give five dollars — but I see the word Drizzy out the corner of my eye and can’t think about anything else. Oh yes, we’re about to bring it back home.

“After all, as Drizzy says, “It’s never too late to realize what you want in your life, and it’s never wrong to fight for it.””

It never occurred to me that the quote might not be real — of course Drake must have said it. This is an email from info@barackobama.com. There’s no way a fake Drake quote snuck its way into a donation LISTSERV email for the president of the United States of America. I’m pretty sure Obama himself fact-checks and copyedits all of these emails. There’s no way the gods would bless me in such a way, right? Impossible.

Nevertheless, I typed the quote into Google, expecting to find the line buried in a random song that either I forgot about, or that was on Views.

No results on lyrics sites. But that doesn’t mean there weren’t any results at all. Google found some sites that the quote appeared on.

The first two: “25 of Drake’s Most Memorable Motivational Quotes” and “20 of the Best Drake Quotes That Inspire People.”

I clicked on the latter, which was hosted at the site wealthygorilla.com. There the quote was — number ten. (“Realize what you want in your life” links out to another site, lifehack.org, for a post titled “7 Ways To Find Out What You Really Want In Life.”)

Checking through the rest of the search results came up with similar sites — Drake motivational lyric pages, Tumblr posts, or people quoting the line in the course of personal social-media life, and attributing the statement to Drake. From there, I floated into the even more interesting world of Google Images, discovering the lovely piece of art you see here. 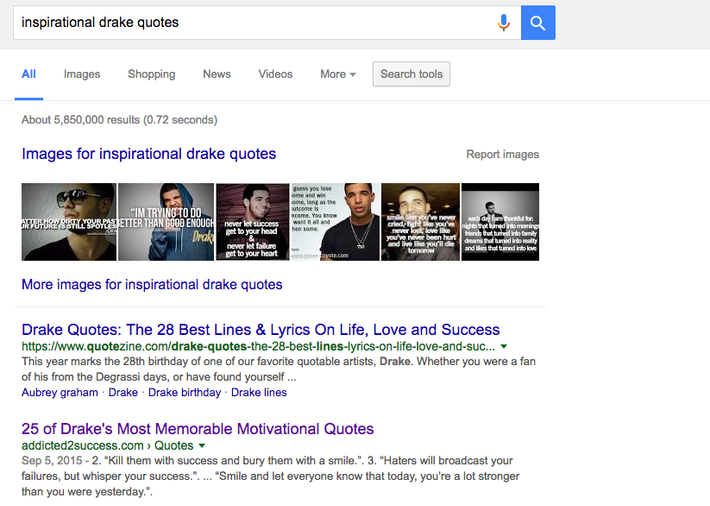 There it is: “25 of Drake’s Most Memorable Motivational Quotes,” hosted by addicted2success.com.

Sometimes, life is perfect. And unless Drake is out here doing secret commencement addresses, Aubrey Drake Graham has never said “It’s never too late to realize what you want in your life, and it’s never wrong to fight for it.” And by “never,” I mean it’s possible that Drake has said this, sometimes, somewhere, perhaps over Gchat, and only spam motivational quotes sites know about it. But it doesn’t seem likely.

If you were wondering, however, if a character named Father Kennedy in 2007 Sandra Bullock film Premonition says “It’s never too late to realize what’s important in your life, to fight for it” — well, yes, that did, in fact, happen.

And I couldn’t be happier — that a quote from a bad Sandra Bullock film was probably turned into a fake Drake spam meme quote that made its way into a donor email for Barack Obama. So happy, in fact, that I think I’ll finally donate some money. Thanks, Obama.

Did Obama Just Email Everyone a Fake Drake Line?