Do you ever wish you’d invented something brilliant — Snuggies, Crocs, that thing that turns all of your vegetables into noodles — so you could retire young and live out your days on some Hawaiian island? So does Thomas Ross. Except Ross claims he actually did invent something brilliant, the iPhone, and is now suing Apple for damages.

According to Ross, the 43-year-old Floridian filed a patent back in 1992 for an “Electronic Reading Device,” Apple blog MacRumors reports. His hand-drawn design features a rectangular screened device with several buttons on the front and sides. If you squint, it looks like an iPhone … or an early-stage rendering of any other e-reader, rectangular cell phone, or Game Boy that has ever graced the market. 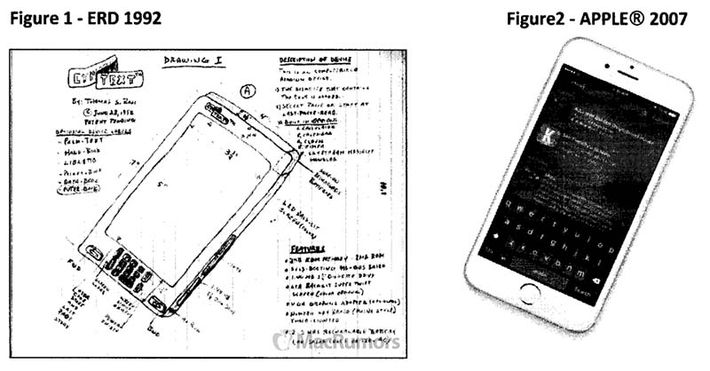 Here’s what our forward thinker had in mind for his device, according to MacRumors.

What Ross contemplated, was a device that could allow one to read stories, novels, news articles, as well as look at pictures, watch video presentations, or even movies, on a flat touch-screen that was back-lit. He further imagined that it could include communication functions, such as a phone and a modem, input/output capability, so as to allow the user to write notes, and be capable of storing reading and writing material utilizing internal and external storage media. He also imagined that the device would have batteries and even be equipped with solar panels.

Sadly for Ross, he lost the patent three years later in 1995 after failing to pay the application fee. Despite this lack of ownership, he’s still suing Apple for $10,000,000, citing “great and irreparable injury that cannot fully be compensated or measured in money.” He also wants royalties up to 1.5 percent for all other “infringing devices.” (Think iPads and iPods.) All we have to say is, good luck, sir. And, also, maybe pay that application fee next time, since it was probably at lot less than $10 billion.