The Bernie Sanders campaign began less as an attempt to capture the nomination than as an effort to gain leverage over Hillary Clinton and the Democratic Party. It will continue in that role, probably until the Democratic convention, and possibly through the election in November. And Sanders does have some leverage: His supporters trust Clinton far less than hers trust Sanders. A significant chunk of his base tells pollsters it won’t vote for Clinton over Trump, leaving the polls precariously close. The trouble is that his leverage might not work quite the way he hopes.

Bernie Sanders Is the Future of the Democratic Party, Right? Not So Fast.
Anti-Trump Riots and the War Over Liberalism
Republicans Wish Non-Racist Nominee Donald Trump Would Stop Saying Racist Things

Sanders surely wants to force Clinton and the rest of the party to move further left, and can now dangle his supporters before her as the prize for cooperating (or the punishment for failing to do so). This makes intuitive sense, because Sanders has run well to the left of Clinton, or any Democratic nominee in modern history, and outperformed almost everybody’s expectations. But the connection between Sanders’s ideology and his performance is far less clear than it might seem, or some of his enthusiasts might hope.

The political scientists Christopher Achen and Larry Bartels argued in a New York Times op-ed last month that Sanders’s supporters are actually somewhat more conservative than Hillary Clinton’s. Two other political scientists challenged their conclusions, and Achen and Bartels vigorously defended them. The dispute is fairly technical, but it is fair to conclude that Sanders’s supporters are at best slightly more liberal than Clinton’s overall.

Of course, from the standpoint of Sanders’s leverage, what matters isn’t whether his overall supporters are more liberal. What matters is the leanings of the subset of his supporters who aren’t already planning to vote for Clinton over Trump. (She doesn’t need to worry much about the Sanders supporters who have already decided to back her in November.) NBC News combined four weeks’ worth of polls to find an extra-large sample of these pro-Sanders holdouts (2,297, to be exact). It found that their ideology is more moderate than the ideology of Clinton’s supporters: 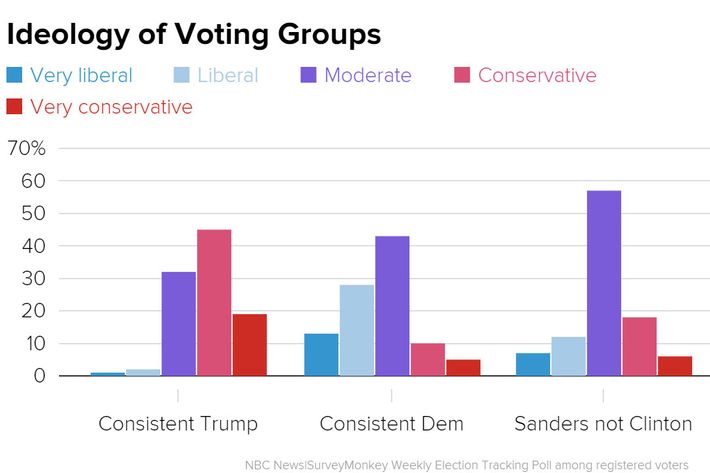 Of course, in reality, the Sanders vote is not really all that ideological. As I argued a month ago, Sanders has tapped into a good-government tradition that has run through a century of progressive politics, and animated campaigns by figures like Adlai Stevenson, Eugene McCarthy, George McGovern, Jimmy Carter, Gary Hart, Jerry Brown, Howard Dean, and Barack Obama. Sanders has the image of an authentic, independent, non-corporate conviction candidate that contrasts perfectly against Clinton’s scandal-tainted persona. He’s attracted an enthusiastic far-left vote, which has amplified its beliefs disproportionately through social media and other activism. His campaign has probably given that wing more cohesion and voice in progressive politics going forward. But there aren’t that many socialists out there, and that isn’t who Clinton needs to win over.

+Comments Leave a Comment
How Can Hillary Clinton Win the Bernie Vote?

THE FEED
19 mins ago
intelligencer chats
intelligencer chats
What Has Made the January 6 Hearings Such Great Television?
By Jen Chaney and Benjamin Hart
TV writers would kill for some of this dialogue, for one thing.
9:00 a.m.
the money game
the money game
Mike Novogratz on His Big Crypto Mistake and What’s Ahead for Bitcoin
By Jen Wieczner
“This has been a complete and total old-school ass-beating.”
7:00 a.m.
life after roe
life after roe
Could New Abortion Bans Lose in Court?
By Jay Michaelson
It won’t be easy, but there are ways to limit the impact of Dobbs.