Copypasta — eternally copied-and-pasted memes, stories, warnings, and urban legends — is a tradition as old the internet itself. Or at least as old as 2004. Today, there’s a new viral status making its way online thanks to moms, dads, and people all over the world with well-intentioned but misguided concerns about web safety. 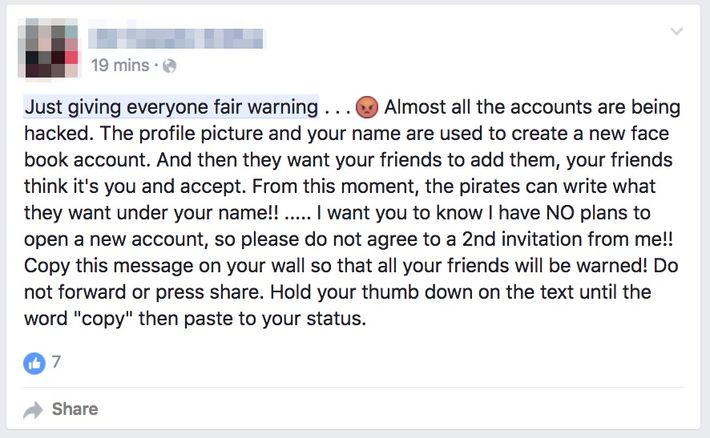 The status is similar to one that circulated in 2012 and also warned people about Facebook “pirates.” (You can read about it on Snopes here.) A discussion thread on Facebook’s Help Community notes that this status started surfacing nearly two months ago on the platform. For some reason, it has taken on new life this week.

The “hack” the status describes is a common internet problem known better as cloning, in which a person will use a photo of you to create a fictitious account under your name. From there, they can add your friends and send them the classic “I am trapped in a foreign country/prison/closet, please send $5,000” messages, in the hopes that since the new profile looks like their friend (real), they might send actually send the cash to the friend (fake).

So while the “fair warning” is well-intentioned, that status isn’t really doing you a whole lot of good. (Not to mention the not-at-all spammy copy/paste instructions included at the end, which really lend some gravitas to the situation.) You’re better off spending some time fiddling with your privacy settings so that your profile picture and list of friends are not visible to the general public, making it at least somewhat more difficult for someone to clone your account.