Here is a remarkably stupid statement that is also true: A Facebook page created to distribute memes about garlic bread is now embroiled in controversy after posting a meme (about garlic bread) that some readers considered transphobic.

Let me attempt to explain Garlic Bread Memes: Imagine popular memes, like Dat Boi, but with garlic bread added to them. That’s the page’s animating idea: What if your favorite memes referenced garlic bread? “This is very stupid,” you say, correctly. It’s amusing nonsense, with a quarter-million followers. Garlic Bread Memes is nothing if not committed to the bit. 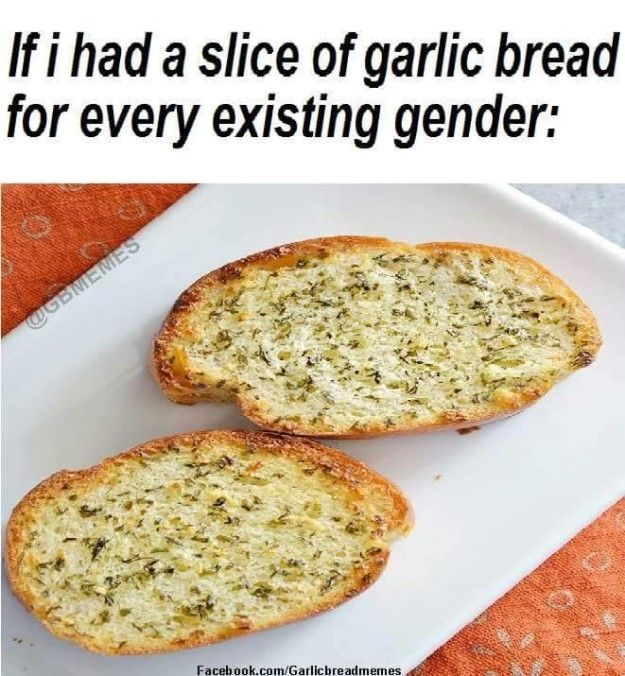 Can you see why this might be a problem? Many people would argue that gender is not a binary, but rather a spectrum of options beside male and female. The page admin who posted the image is, according to BuzzFeed, an 18-year-old from Israel named Boaz, who said, “I posted it because I find it funny.”

Many vocal readers did not. The garlic-bread meme, in this case, was transphobic and discriminatory. Others found the outrage over a meme about garlic bread and gender funny in its ludicrousness. Then, Redditors found it, and swarmed the page to comment on political correctness and social-justice warriors.

Here’s another true statement: The Garlic Bread meme page is not even the first Facebook meme page this year to devolve into full-on flame wars following accusations of bigotry. A couple of weeks ago, the Facebook group Post Aesthetics — a private meme-sharing group — experienced a dramatic schism after members got into a heated debate over whether the frog Dat Boi was racist for appropriating black slang.

Flame wars online — especially on Facebook — are nothing new. But they’ve usually been confined to political groups and pages that focus on issues into which people have invested an enormous amount of emotional energy, like parenting. No one is invested in garlic bread the way parents are invested in their breast-feeding choices. Garlic Bread Memes and Post Aesthetics are silly pages. I don’t mean that in a derogatory way, just in the sense that you wouldn’t expect them to erupt into extended flame wars.

To some extent, this is a case of what’s known as the filter bubble — the assumption that our highly customized and personalized social-media feeds are accurate reflections of the world at large. It’s understandable that anyone willing to subscribe to the pinpoint specificity of garlic-bread memes might also assume that fellow followers are like-minded. But homogeny doesn’t scale. Once you have a group in the thousands, you will come across people with whom you disagree.

But it’s also that on the internet, where participants are constantly compelled to outwardly perform their identities, there’s no distinction between the silly and the serious, the personal and the political. Everything is a staging ground for debate, even meme pages.

8:00 a.m.
politics
politics
Is the Justice Department Incompetent?
By Ankush Khardori
Federal prosecutors have suffered a string of high-profile losses that point to long-term institutional problems.
5/18/2022
early and often
early and often
Progressives Win Some, Lose Some in House Primaries
By Ed Kilgore
AIPAC and a crypto billionaire’s PAC made waves in multiple House Democratic primaries on Tuesday.
5/18/2022
politics
politics
Poorly Conceived Biden Disinformation Board Put on Pause
By Benjamin Hart
Its embattled leader, Nina Jankowicz, announced her resignation on Wednesday.
5/18/2022
pool party
pool party
The Most Powerful Person in Media Missed the Media Power Person Party
By Shawn McCreesh
But his model mom, Maye Musk, was there.
5/18/2022
early and often
early and often
Idaho Governor Brad Little Fends Off Trumpy Usurper
By Ed Kilgore
In Tuesday’s GOP primary, Little trounced Lieutenant Governor Janice McGeachin, who’d tried repeatedly to cancel his COVID policies.
5/18/2022
politics
politics
De Blasio Still Looking for New Job, Mulls Run for Congress
By Nia Prater
The former mayor previously considered runs for New York governor and the 11th Congressional District.
5/18/2022
early and often
early and often
Trump Wants Dr. Oz to Copy Him and Declare Victory Before the Race Is Called
By Nia Prater
The race between Mehmet Oz and David McCormick has not been called and will likely head toward an automatic recount.
5/18/2022
qanon nation
qanon nation
The ReAwaken America Tour Is the Start of QAnon 2.0
By Laura Jedeed
The conspiracy theory that has gripped the conservative movement is evolving. But into what?
5/18/2022
early and often
early and often
2022 Midterms: A Guide to the Races Worth Watching
By Ed Kilgore
A cheat sheet to keep track of all the crucial races, primary upsets, and campaign drama — Trump-fueled and otherwise — from now through Election Day.
5/18/2022
early and often
early and often
Trump Couldn’t Give Oz a Decisive Win Over McCormick
By Ed Kilgore
Three MAGA-y candidates dominated Pennsylvania’s GOP Senate primary, but Trump’s official pick appears to be headed to an automatic recount.
5/18/2022
the money game
the money game
The Crypto Cult of Do Kwon: ‘If It Was a Ponzi Scheme, They Did a Good Job’
By Kevin T. Dugan
The volatile, charismatic founder created a $60 billion empire by calling people “poor.” It all came crashing down in a couple days.
5/18/2022
games
games
Brittney Griner Still Isn’t Getting Enough Attention
By Will Leitch
As a trumped-up trial in Russia looms, her case remains curiously under the radar.
5/17/2022
early and often
early and often
Madison Cawthorn’s Self-destruction Is Complete
By Ben Jacobs
The youngest Republican representative in history lost on Tuesday following a series of bizarre scandals.
5/17/2022
early and often
early and often
Cargo Shorts Enthusiast John Fetterman Wins Democratic Senate Race
By Nia Prater
He won days after suffering a stroke and may be Democrats’ best hope for flipping a Republican senate seat.
5/17/2022
the truth is in here
the truth is in here
Pentagon: UFOs Are Everywhere, Aliens Not So Much
By Benjamin Hart
At the first congressional hearing of its kind in more than 50 years, officials said that sightings of unidentified objects have skyrocketed.
5/17/2022
covid-19
covid-19
How to Order More Free Home COVID Tests From the Government
By Margaret Hartmann
U.S. residents can now order a third batch of eight free COVID-19 tests from the federal government. Here’s how to claim them.
5/17/2022
politics
politics
Biden Condemns White Supremacy As ‘Poison’ During Speech in Buffalo
By Nia Prater
The president and First Lady visited Buffalo to pay their respects in the aftermath of a racist rampage that left ten people dead.
5/17/2022
what we know
what we know
What We Know About the Racist Attack at a Buffalo Supermarket
By Chas Danner
As the city mourns the ten Black victims murdered in the attack, troubling details about the white supremacist gunman continue to emerge.
5/17/2022
early and often
early and often
Generic Ballot Shows Republicans on Track to Retake House
By Ed Kilgore
The reliable indicator shows Republicans with a modest but steady lead. If 2022 is anything like recent midterms, the House will flip for sure.
5/17/2022
the national interest
the national interest
Joe Manchin Has Done a Terrible Job Fighting Inflation
By Jonathan Chait
The pivotal senator would rather complain about prices than do anything about them.
5/17/2022
life after roe
life after roe
Ending Roe v. Wade Is a War on Women and Children
By Sarah Jones
The right offers nothing but more suffering to the people it purports to help.
5/17/2022
the system
the system
America’s Impenetrable Fog of Innocence
By Zak Cheney-Rice
Why it’s so hard for so many to see the causes of the Buffalo mass shooting clearly.