Donald Trump, reports Maggie Haberman, has fired Corey Lewandowski in what could be seen as either the most recent campaign shake-up, or merely the latest iteration of an endless power struggle that has seen figures like Lewandowski, Roger Stone, and Paul Manafort cycle in and out of the candidate’s earshot. When the operation in question is a garbage fire like the Trump-for-president operation, terms like “campaign manager,” which imply a cohesive entity that is managed in some hierarchical fashion, may not even apply.

Trump’s campaign, reports the Associated Press, has 30 paid staff on the ground across the United States of America. That is a smaller number than the Hillary Clinton campaign has in many states. Clinton’s massive ground advantage is supplemented by an even more massive television-advertising advantage. The current ratio of Clinton to Trump television-ad spending in battleground states is one to zero. (Data via NBC News, chart via the Washington Post.) 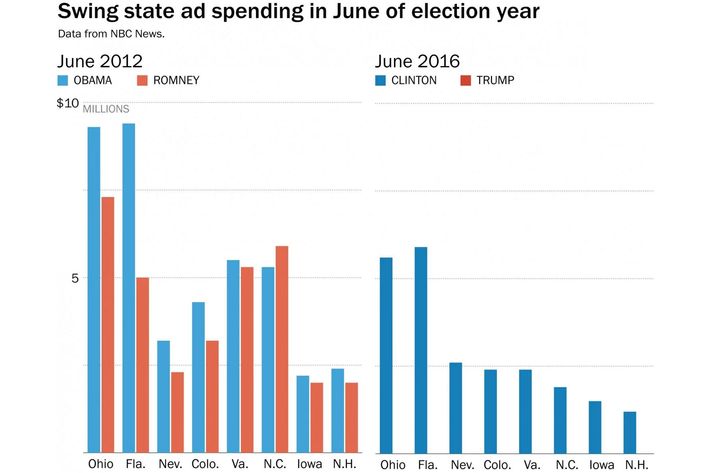 Trump has previously vowed to campaign in deep-blue states like New York, California, and Maryland, where no Republican could win. He has devoted at least some of his scarce resources to this hopeless goal. Meanwhile, polls show him locked in a close race in overwhelmingly Republican Utah, where he has promised the state’s party chairman he will spend campaign time to lock down the Republican vote. If you’re a Republican presidential candidate devoting resources to Utah, that’s real bad. Trump is also spending some of his time this week on a trip to Scotland, where he will visit a golf course and discuss the Brexit vote. Scotland is not represented in the Electoral College and has very few eligible voters.

Meanwhile, Bloomberg reports that Trump mistakenly identified the perpetrator of the mass shooting in Orlando as foreign-born because “Staffers had accidentally uploaded the wrong version of the speech into the teleprompters.” Also, “Trump doesn’t carry a mobile phone or use e-mail, giving staff in close proximity—most often Lewandowsi—greater influence.” It’s probably helpful for Trump that a rank amateur like Lewandowski is gone. But when the candidate is also a rank amateur and can be manipulated by whichever staffer happens to be in close physical proximity, and fails to use modern communications tools, then you have a garbage fire that is going to keep burning for a while.

Trump dominated the Republican primary because he mastered one weird trick. The trick was to constantly spout wild and offensive comments, frequently targeted at women or people of other races or nationalities, generating a constant stream of news coverage focused on Trump’s latest outrage. Since most Republican voters really like outrageous comments, especially when they’re directed at women and people of other races or nationalities, this technique worked well enough to overcome Trump’s massive strategic and organizational liabilities as a candidate. But since most voters in the electorate as a whole feel differently, Trump’s outrageousness is now compounding rather than hiding his technical incompetence.

THE FEED
13 mins ago
what we know
what we know
Gunman Kills At Least 20, Including 18 Children, at Texas Elementary School
By Intelligencer Staff
An 18-year-old gunman targeted Robb Elementary School in the town of Uvalde, which is west of San Antonio. The gunman is dead.
4:00 p.m.
2022 midterms
2022 midterms
Republicans May Have Sabotaged Their Best Chance to Beat Whitmer
By Matt Stieb
Five GOP candidates for governor in Michigan — including the top two contenders — faked signatures to get their names on the ballot.
3:17 p.m.
adam neumann
adam neumann
Adam Neumann’s New Business Plan
By Kevin T. Dugan
The former WeWork CEO wants to get rich(er) by helping corporations appear more environmentally sustainable than they really are.