Cormac McCarthy, famed American author and playwright best known for works like The Road and No Country for Old Men, is not dead. He did not suffer a heart attack at the age of 82. He is, by all accounts, fine. But this morning, a now-deleted tweet from USA Today claimed otherwise, proclaiming McCarthy’s demise. 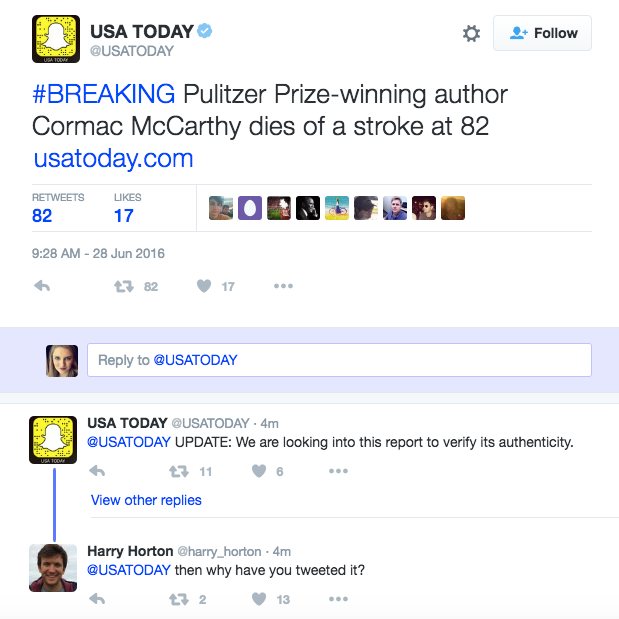 The paper followed up with a second tweet saying they were still trying to verify the death announcement’s authenticity. And then a third tweet, explaining that USA Today had been had by “a ‘rogue’ Twitter account.”

The “rogue” account was one that claimed to be a “news” Twitter for Knopf publishing. The real Knopf account has over 250,000 followers and has published more than 11,000 tweets; the fake one has just over 1,000 followers, and had tweeted only four times. After USA Today’s false report, the fake revealed itself: “This account is hoax created by Italian journalist Tommasso Debenedetti. McCarthy is alive and well.”

This account is hoax created by Italian journalist Tommasso Debenedetti. McCarthy is alive and well.

If that name sounds familiar, it’s because De Benedetti, an Italian journalist and teacher, has been in the hoax game since before most people had heard of Twitter. He started by selling fake interviews to Italian newspapers with American writers like John Grisham. (He was eventually caught.) He convinced the International Herald Tribune to run a fake letter from Umberto Eco, and Italian writer and philosopher, regarding the war in Libya. (He later sent a letter explaining to the paper what he had tricked them into doing.)

In Twitter’s early days, De Benedetti managed to convince a number of people that Pope Francis, Fidel Castro, Pedro Almodovar — among others — had died. He posed as the former president of Afghanistan, Hamid Karzai, and made false announcements under Karzai’s name. Back in 2012, De Benedetti spoke with The Guardian about his hoaxes. “Twitter works well for deaths,” De Benedetti told the paper. “Social media is the most unverifiable information source in the world but the news media believes it because of its need for speed.”

De Benedetti’s methods are straightforward, and (at this point) fairly well-known. The McCarthy hoax was no exception. He creates a Twitter account under a the name of a fairly well-known person, usually a literary figure — in this case, Don DeLillo — builds a small but often influential following, and then changes the handle, picture, and bio to one that seems superficially like an official account. He can usually count on one or two followers, scrolling through their feeds without stopping to think whether or not they follow the “AKnopfNews” Twitter account, to retweet whatever bit of hoax news he wants to seed. In this case, Joyce Carol Oates shared the fake news of McCarthy’s death, lending the item some legitimacy. From there, Twitter’s frictionless sharing tools more or less do the rest of the work. It’s a bit frightening, actually, how easily someone can do this. (Though it’s not usually as effective, just ask these kids who impersonated school officials on Twitter in an attempt to ensure a snow day.)

It’s a little surprising that USA Today was so quickly hoaxed by an account without verification, and a total of six tweets, and a death announcement claiming the author died “for stroke.” But getting to something first (and the SEO traffic rewards that come with that) is often a digital news organization’s top priority. Which is exactly the point De Benedetti has said he is trying to make when he creates these fake Twitter announcements. It’s a silly, obvious, point. But the fact that people keep falling for the obvious hoaxes feels like a good reason for it to keep getting made.

Cormac McCarthy is alive and well.

How USA Today Got Fooled by an Infamous Hoaxer