Darby Risner is a 15-year-old from Alabama who was having a great time with her friends at a party this weekend when she spotted a giant Barney head (you know: the dinosaur). So she did what any good teen would do: She plunked Barney on her head.

Darby ended up stuck inside the dino head for nearly an hour, until the local fire department finally freed her.

“I had originally worn the whole [Barney] costume to school in 7th grade and it fit perfectly then,” Darby told me via Twitter DM. “All the girls came down stairs as I attempted to scare them. We then all walked over to the couch and sat down. At that point, the head had moved its way down to my lower arms to about my elbow area.” 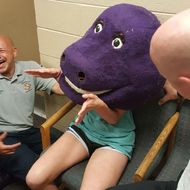 Darby says at first she felt fine, but that feeling went away quickly. “I thought to myself ‘I’ll be fine, I can get it off whenever.’ But after about 15 minutes had passed an[d] I was like ‘I need to get this off,’” she said. She tried to wriggle her way out and when that failed, Darby enlisted a few friends. That failed, too. The girls then clued in some of the parents at the party, who tried Vaseline to help slide the head off. (This also didn’t work, but the fireman would later describe her as “a greased pig.” Which is what every teenage girl hopes to hear.) 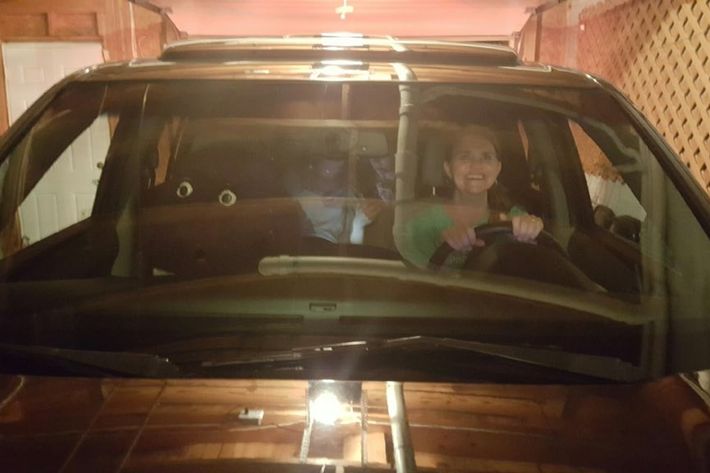 Realizing they weren’t going to get the dino off without some help, Darby and her friends headed to the fire station where “the firemen cut slits into the head; then they had finally got it to budge an[d] it came off.” Darby says she felt nothing but “relief” at being freed from her Cretaceous-period prison and recommends going immediately to a fire station if you ever find yourself similarly trapped in a giant Barney mask. 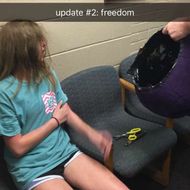 As for getting stuck, Darby says that the Barney incident was just the latest of a series of past incidents, including a bus bathroom and a baby swing. “I have been stuck in many things before and I may have learned my lesson, but maybe not lol,” she said. We’re guessing not, since Darby also told Select All she’s gunning to be her school’s mascot, which entails wearing a Husky costume: “I tried out to be the mascot for my school but I don’t know how well that will work out now 😂.”