Check out this tweet from the president of the United States of America, Barack Obama, regarding the political squabble surrounding Supreme Court nominee Merrick Garland.

Senate leaders should listen to the American people. #DoYourJob pic.twitter.com/vArMxcZh5W

Filling a Supreme Court vacancy is an extremely important process, the results of which could have significant repercussions for vast swaths of the American citizenry.

“Nice,” you whispered to nobody in particular.

The 69 (verb: 69-ing) is a sex move, as we all know because we are sophisticated, sex-having adults. But 69, being a two-digit number unavoidable when counting from 68 to 70, also appears in other contexts. Like the president’s tweet.

In a sexual context, “nice” has been around for a long time. We crawled out of the primordial ooze and figured out how to simultaneously stimulate each others’ genitals with our mouths, and then shortly thereafter we figured out how to react to news of the 69: “Nice.” Simple, elegant, to the point.

The sex number is, among a large subset of social-media users, an incredibly important number (as is the weed number, 420). When you see the sex number, which is 69, it is your duty to comment “nice.”

Let’s check in on the response to that Obama tweet. 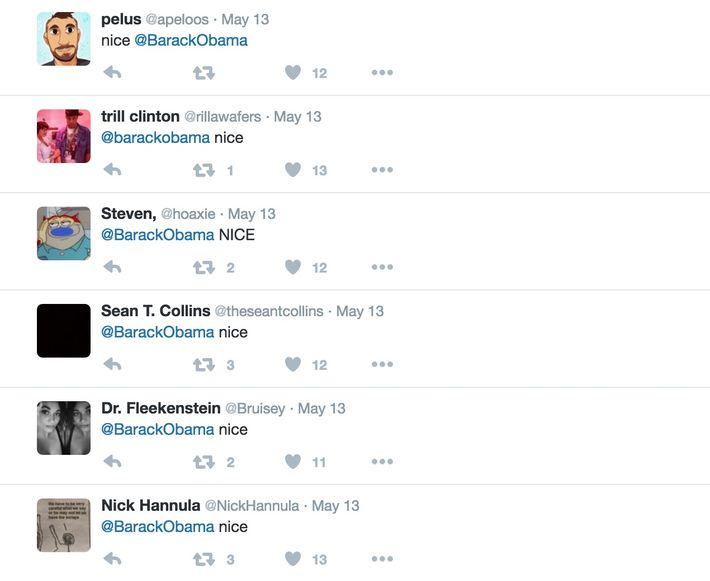 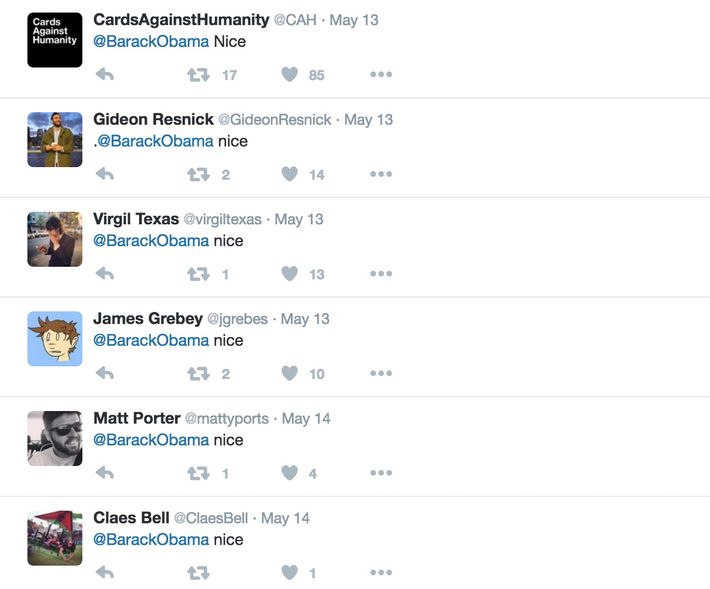 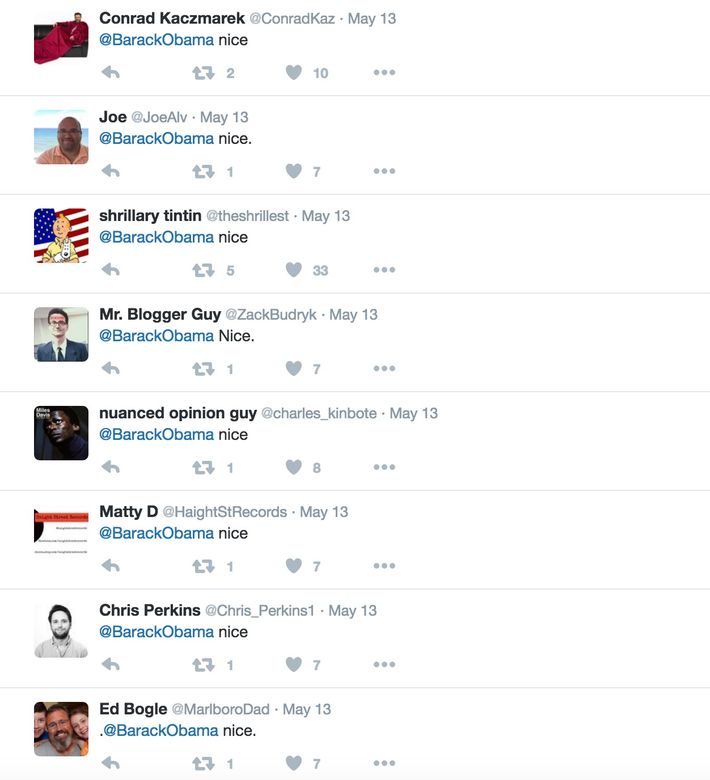 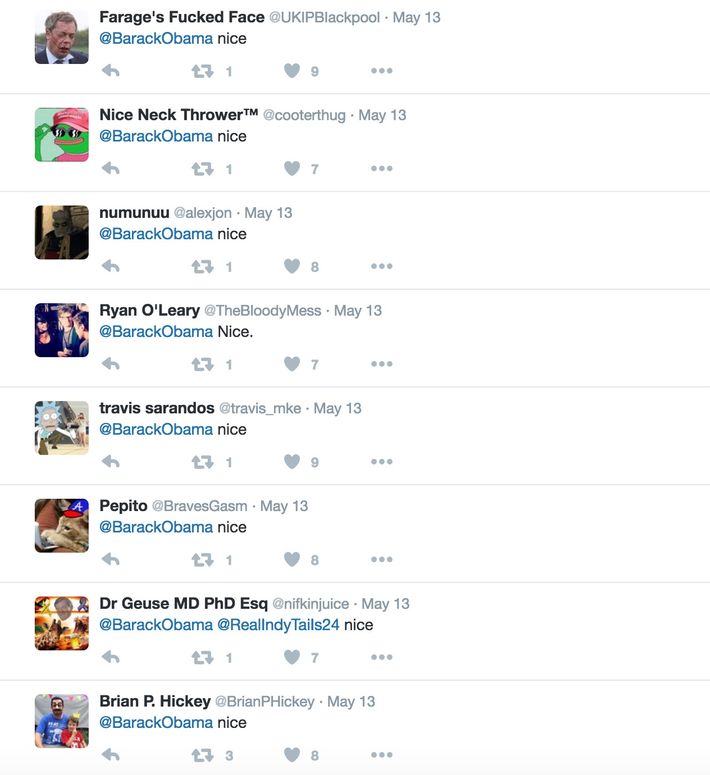 Impromptu collaboration on the web is always an intensely satisfying moment, and accumulating a large stack of “nice” is great — even more so when it happens in traditionally combative forums like the area beneath a presidential tweet. The 69 is bipartisan. Red states and blue states have both voted “nice” on Proposition 69. Make America 69 Again. There are many responses to Obama’s tweet that are not “nice,” but that’s to be expected. There are still many people saying “nice,” and that’s … nice.

Adding your “nice” to the Jenga tower of “nices” is one of the great small kindnesses of our age. The 69 is a clarion call, to which users answer, “I see the 69, and I’m aware of its significance and our traditions.”

Game of Thrones' season finale will be 69 minutes, the show's longest episode ever https://t.co/zKoEwJMnK2 pic.twitter.com/1pprAafwLj

Have you ever played the Game? Maybe you have, but if not, the Game is played like this: You cannot think about the Game. If you remember the Game, you lose. The number 69 is similar, in that you don’t have to actively seek out 69s, but when you see them, you must act. You have to say “nice.” That is shorthand for “You and I? We both know about sex. Congratulations to us on our base-level sexual knowledge.” If you see a 69 and don’t comment “nice,” that just means you don’t know about an extremely cool activity (which is, to be clear, having sex).

Weed fans celebrate weed on April 20, which can also be written as 420. So, too, do sex-havers have a calendar date of their own. It’s today, June 9, abbreviated as 6/9. Remove the slash. Do you see it? It’s the number 69. The clock will never read 6:9, but I think celebrating at 6:09 is perfectly acceptable.

In conclusion: 69. Please leave your thoughts in the comments.

Why 69 Is the Internet’s Coolest Number (Sex)

THE FEED
9:00 a.m.
fear vs. fun
fear vs. fun
Phone, Keys, Wallet, Test Strip
By Kyra Breslin
Checking for fentanyl is becoming a necessary ritual of nightlife.
8:14 a.m.
what we know
what we know
Videos Show Police Brutally Beating Tyre Nichols: Updates
By Chas Danner
In the horrifying footage released Friday by Memphis authorities, officers can be seen delivering numerous blows to Nichols’s head.
1/27/2023
early and often
early and often
Republicans Want Surrender, Not a Deal, on the Debt Ceiling
By Ed Kilgore
There can be no “bipartisan” solution to the debt-ceiling crisis when one party refuses to talk about the revenue side of the ledger.

1/27/2023
the talented mr. santos
the talented mr. santos
George Santos Commemorates Holocaust After Lying About It
By Nia Prater
The U.S. representative, who doesn’t actually have Jewish heritage but may have made antisemitic remarks, gave a speech on Holocaust Remembrance Day.
1/27/2023
early and often
early and often
McDaniel Hangs Onto RNC Gavel Despite DeSantis Defection
By Ed Kilgore
Harmeet Dhillon threw a scare into the chair of the RNC, but even late support from DeSantis didn’t convince party voters away from backing McDaniel.
1/27/2023
early and often
early and often
Judge Orders Release of Video Showing Attack on Paul Pelosi
By Matt Stieb
The body-cam footage of the responding officer shows Pelosi and assailant David DePape struggling over a hammer before the assault.
1/27/2023
early and often
early and often
Republicans Are Already Burying Their Kooky National Sales-Tax Plan
By Ed Kilgore
McCarthy promised a floor vote on the Fair Tax, which would create a 30 percent national sales tax and abolish the IRS. Now, it may die in committee.
1/27/2023
the talented mr. santos
the talented mr. santos
Here’s Every Single Lie Told by George Santos
By Matt Stieb
Navigating the many exaggerations and falsehoods of New York’s newest representative.
1/27/2023
the national interest
the national interest
The Durham Probe Was Barr’s Witch Hunt
By Jonathan Chait
A shockingly unethical crusade to vindicate Trump.
1/27/2023
just asking questions
just asking questions
How an 18-Year-Old Got His Crossword Puzzle Into the Sunday Times
By Benjamin Hart
High-school senior Garrett Chalfin on winning over the editors — and the jocks at summer camp — with wordplay.
1/27/2023
guns
guns
Coming Soon to Stores: The AR-15 for Kids
By Matt Stieb
Next month, an assault-style rifle could wind up in the hands of children unless regulators step in.
1/27/2023
early and often
early and often
The Data-Driven Strategy Behind Democrats’ State-Level Success in 2022
By Eric Levitz
The president’s party almost always loses state-level power in midterm elections. Here’s how Democrats bucked that trend last year.
1/26/2023
early and often
early and often
Brian Kemp for President Makes a Lot of Sense
By Ed Kilgore
Georgia’s governor doesn’t have the warmest personality. But in trouncing both Donald Trump and Stacey Abrams, he showed world-class political chops.
1/26/2023
master of the garden
master of the garden
James Dolan on Blacklisting His Enemies: I Have Rights, Too
By Matt Stieb
The MSG owner defended his use of facial recognition to ban lawyers who have sued him in a highly entertaining local-TV rant.
1/26/2023
screen time
screen time
How Much Does Unbanning Trump Really Matter?
By John Herrman
On the internet, you can never really go back home.
1/26/2023
2024 senate races
2024 senate races
Adam Schiff Runs for Senate on the Enemies He’s Made
By Ed Kilgore
Trump and Republicans inadvertently elevated a mild-mannered moderate who is taking his shot at Dianne Feinstein’s seat.
1/26/2023
just asking questions
just asking questions
Why the College Rankings Are Getting Less and Less Relevant
By Benjamin Hart
Former college president and longtime rankings critic Colin Diver on U.S. News & World Report’s moment of reckoning.
1/26/2023
the national interest
the national interest
Ron DeSantis’s Long War on Black Political Power
By Jonathan Chait
It’s not just a “culture war” — it’s about political representation.
1/26/2023
chinese democracy
chinese democracy
The Radical, Lonely, Suddenly Shocking Life of Wang Juntao
By Christopher Beam
After half a century of resisting the Chinese Communist Party, a dissident confronts murder and espionage in Queens.
1/25/2023
early and often
early and often
Marjorie Taylor Greene’s Desperate Plan to Be Trump’s Vice-President
By Ed Kilgore
MTG just got her first committee assignments and can’t control her mouth, but she might be on Trump’s shortlist. He’d be nuts to pick her.
1/25/2023
tremendous content
tremendous content
Why Jeff Bezos and Lauren Sánchez Are Relationship Goals
By Margaret Hartmann
Think they’re just disgustingly wealthy? Think again! Sánchez’s ‘Wall Street Journal’ Q&A reveals they’re hardworking, humble, and totally adorable!
1/25/2023
early and often
early and often
Trump’s Terrified 2024 Rivals Show It’s His Race to Lose
By Ed Kilgore
Republicans’ reluctance to enter the presidential race is telling, and the longer they wait, the more likely Trump’s renomination becomes.
1/25/2023
wyd
wyd
Trump Has Reportedly Discovered the Modern Magic of Texting
By Matt Stieb
Welcome to 2023, sir.
1/25/2023
sports
sports
Something’s Still Not Quite Right at the Baseball Hall of Fame
By Ben Jacobs
Barry Bonds and Roger Clemens are finally off the ballot, but the steroid era’s influence lingers.
1/25/2023
war in ukraine
war in ukraine
U.S. Tanks Are on Their Way to Fight Russians in Ukraine
By Matt Stieb
It may be Washington’s biggest escalation, though Biden downplayed the move.