“There is nothing to fear, but me, myself.” Photo: Alex Wong/Getty Images

On Thursday night in Cleveland, Donald Trump shouted dangerous lies into a microphone for 77 minutes. By the time he was done, the GOP nominee had conjured an America on the precipice of irreversible decline, a nation where the black president incites violence against law enforcement, homicidal immigrants drive up the mortality rate of young white women, an incompetent elite auctions off our economic future to foreign nations, and the Democratic nominee plans to flood the country with jihadist refugees, while the FBI schemes to keep her out of prison — and the only thing that can prevent the loss of what little we have left is Donald J. Trump.

We won’t know for several days whether a majority of voters think they live in that America. Until then, here are five things liberals can tell themselves about Trump’s dystopian hate speech to keep calm and carry on.

1. It was too loud, too long, and too humorless.
The Donald Trump who addressed the Republican National Convention was not the Donald Trump who won the Republican primary. Sure, the mogul’s message has always been bleak and authoritarian. But it’s also been playful, spontaneous, and funny. Throughout the primary, the darkness of Trump’s vision was leavened by anarchic joy. The hateful demagoguery was interspersed with bouts of WWE-style braggadocio; audacious impersonations of Trump’s enemies; streams of dada-sentences like, “I have so many websites. I have them all over the place”; and the thrilling sense that no one, least of all the candidate, knew just what he would say next.

The point here isn’t that these elements belong in a nominee’s acceptance address, but, rather, that Trump’s political talents aren’t well suited to that form. The GOP nominee obviously shouldn’t spend his convention speech improvising insults about his political opponents. But, ideally, he would retain the energy and charisma of those off-color improvisations. Instead, Trump delivered every line of his far-too-long speech in the same “I don’t understand the concept of microphones” shout.

A worldview this bleak, delivered this gratingly, won’t win over nonbelievers.

2. Americans aren’t actually worried about crime.
Hoping to conjure the mood that put Richard Nixon in the White House, Trump centered his speech on a national crime wave that doesn’t actually exist. While preliminary 2015 data show a troubling spike in big-city homicides, that uptick is concentrated in the economically disadvantaged neighborhoods of a few major cities. The trend is not national or common to all urban centers. In New York City, there were fewer shootings over the first six months of this year than during any similar time span in its recorded history. Across the country, violent crime has fallen sharply since the current president took office.

The news media’s preoccupation with violence and disorder leads many Americans to overestimate the prevalence of crime. But the reality of our historically low crime rate is reflected in Gallup’s polling data. 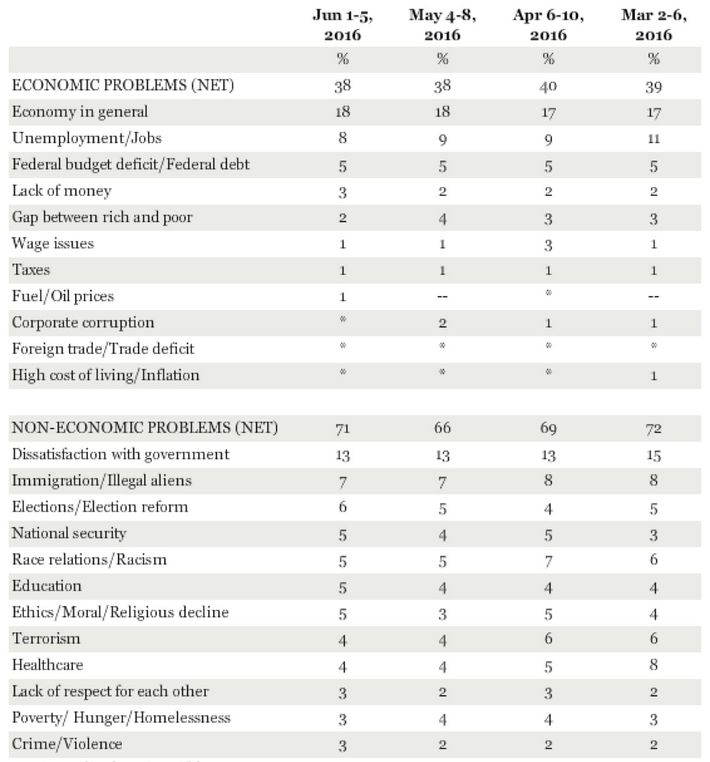 Crime is the most important issue to a whopping 3 percent of the country. A speech focused on that issue is unlikely to change the dynamics of the race.

3. Barack Obama has an approval rating of roughly 50 percent.
More Americans approve of Obama’s job performance than disapprove of it. A speech premised on the idea that the current president has “used the pulpit of the presidency to divide us by race and color,” while leading the nation to the brink of apocalypse, won’t ring true to voters Trump doesn’t already have in his corner.

4. Nothing in this speech will improve Trump’s standing with the demographics he struggles with.
There aren’t enough reactionary white men without college degrees to put Trump in the White House by themselves. Recent polls have shown the GOP nominee garnering 0 percent of the black vote, losing Latinos by 69 points, and on pace to become the first Republican in decades to lose college-educated whites. His speech offered nothing to any of these demographics. His denigration of Obama will further alienate African-Americans, his anti-immigrant demagoguery will do the same for Hispanics, while the total absence of policy content and intellectual rigor won’t improve his standing among the highly educated. True, he did use some politically correct language when referring to the LGBT community. But he already had the log-cabin-fascists vote locked up before Thursday night.

5. Donald Trump is trying to win on fear. But he is instability personified.
Even if the country were experiencing a massive crime wave, even if Americans were as terrified as Trump would like them to be, it’s not clear that an atmosphere of terror would redound to Trump’s benefit. When voters are scared, they tend to grow more conservative. But in this election, Hillary Clinton is the conservative choice, in the literal meaning of the term. Clinton is an experienced public servant running on a vision of incremental progress. Trump is an inexperienced insurgent campaigning on radical change.

In the wake of the massacre at the Pulse nightclub in Orlando, Trump gave a speech quite similar in tone and content to the one he delivered at the RNC. The mogul argued that the nation was in unprecedented peril and only his radical program of religious discrimination could save it from certain doom. And then the public’s trust in his capacity to handle terrorism went down.

So, don’t worry, liberals: There’s nothing to fear but fear itself — and/or this CNN insta-poll.

8/9/2022
2022 midterms
2022 midterms
Senate Control Could Come Down to a Georgia Runoff Once Again
By Ed Kilgore
If neither Raphael Warnock nor Herschel Walker wins a majority in November, which looks plausible, they’ll face off in a December runoff.
8/9/2022
crime
crime
Police Arrest Suspect in Killings of Muslim Men in Albuquerque
By Benjamin Hart and Nia Prater
At least three Muslim immigrants have been ambushed and killed in recent weeks, terrifying the local community.
8/9/2022
exhibit a
exhibit a
Making Sense of the Trump Raid
By Ankush Khardori
After a summer of intense criticism, Merrick Garland’s Justice Department takes its boldest step yet in pursuit of the former president.
8/9/2022
the power trip
the power trip
What’s in Trump’s Safe the FBI Raided?
By Olivia Nuzzi
Former aides consider the contents of the vault at Mar-a-Lago.
8/9/2022
early and often
early and often
2022 Midterms: A Guide to the Races Worth Watching
By Ed Kilgore
A cheat sheet to keep track of all the crucial races, primary upsets, and campaign drama — Trump-fueled and otherwise — from now through Election Day.
8/9/2022
mar-a-lago raid
mar-a-lago raid
Convicted Felons Are Leaping to Trump’s Defense
By Matt Stieb
Fellow politicians and operatives who also had run-ins with the Feds are claiming him as one of their own.
8/9/2022
the national interest
the national interest
What Is Really Unprecedented Is Trump’s Criminality
By Jonathan Chait
Republicans are angry at the FBI, but they choose to yoke themselves to a flagrant crook.
8/9/2022
early and often
early and often
Republicans Go to the Mattresses to Defend Trump From the Feds
By Ed Kilgore
The gestures of loyalty to Trump and fury at law enforcement by leading Republicans with no idea of the raid’s purpose or findings are revealing.
8/9/2022
goat
goat
Serena Williams Announces Her Retirement From Tennis
By Claire Lampen
In a Vogue essay, she says she plans to step away from the sport after the U.S. Open wraps next month.
8/9/2022
the city politic
the city politic
Yuh-Line Niou on Her Especially Personal Run for Congress
By Nia Prater
From representation to disability policy, she says there’s a common theme: Courage.
8/9/2022
games
games
The Mets Are Having an Extremely Un-Mets Season
By Will Leitch
They’re overachieving their way to the playoffs — and having a great time doing it.
8/9/2022
what is elon musk?
what is elon musk?
Musk and Trump and a Little Steve Jobs
By Chris Lee
The characterological origins of Tony Stark.
8/9/2022
what is elon musk?
what is elon musk?
Elon’s Biggest Boondoggle
By Alissa Walker
Why did the world’s richest man spend the past five years trying to sell cities a hole in the ground?
8/8/2022
unsolved mysteries
unsolved mysteries
The Bodies Keep Piling Up at Lake Mead
By Chas Danner
Four sets of human remains have now been discovered in the rapidly receding reservoir since May.
8/8/2022
early and often
early and often
Will Democrats’ Sudden Legislative Success Matter in the Midterms?
By Ed Kilgore
With the passage of the Inflation Reduction Act and gas prices dropping, Democrats’ odds of success in November’s elections are looking up.
8/8/2022
early and often
early and often
Photos of Trump Notes in Toilet Were Better Left to the Imagination
By Margaret Hartmann
Reporters were so preoccupied with whether they could find these pictures that they didn’t stop to think if they should.
8/8/2022
early and often
early and often
The GOP Is the Party of Insulin-Gouging
By Ross Barkan
In their quest for zero-sum victories — and Democratic defeats — Republicans are incapable of tackling popular issues that would benefit them.
8/8/2022
the city politic
the city politic
Carlina Rivera on What Democrats Get Wrong About Latino Voters
By Nia Prater
A daughter of the Lower East Side runs to represent the district where she grew up.
8/8/2022
early and often
early and often
Senate Democrats Finally Get Their Big Climate, Health Care, and Tax Bill Done
By Chas Danner
An overview of what’s in the Inflation Reduction Act and what last-minute changes were made.
8/8/2022
2022 midterms
2022 midterms
The GOP’s Glut of Rookie Candidates Could Mean Lots of Costly Mistakes
By Ed Kilgore
Experience in politics isn’t everything. But the GOP’s unusually large number of first-time candidates could mean midterms trouble down the road.
8/8/2022
early and often
early and often
The Biden Age Is Hitting Its Stride
By Errol Louis
The debate over how old the president is and whether he should run again is a distraction from how much he has already accomplished.
8/8/2022
what is elon musk?
what is elon musk?
What Is Elon Musk?
By Lane Brown
And how is it possible that he could emerge from his Twitter debacle more culturally dominant than ever?