Today, comedian Sarah Silverman joined the illustrious list of celebrities who have been hacked on Twitter. (List includes, but is not limited to, Tenacious D, Mark Zuckerberg, Kylie Jenner, Katy Perry, Keith Richards, and the guy who founded Twitter.) In a now-deleted tweet, Silverman (or rather her hacker) tweeted a link to an Anonymous video earlier this morning. 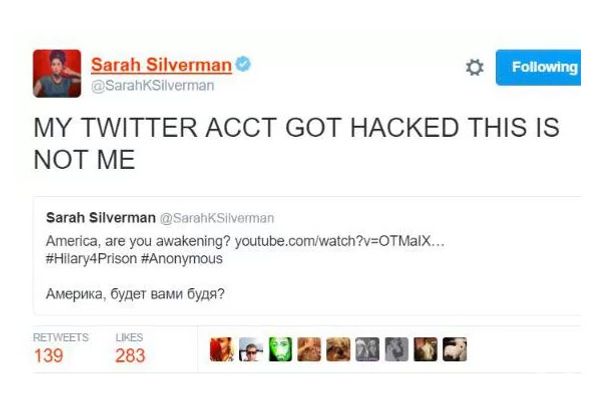 The hashtag #Hilary4Prison is particularly loaded, not just because it shows the hackers are unclear on how to spell the Democratic nominee’s name, but also given Silverman’s speech at the DNC earlier this week. A staunch and vocal advocate for Bernie Sanders during the primaries, Silverman pivoted in her speech and urged her fellow Sanders supporters to throw their weight (and votes) behind Hillary Clinton in November. (There was also a particularly great, off-the-cuff line where she said to the Bernie or Bust subset, “You’re being ridiculous.”)

As of 8:30 a.m. on Wednesday morning it appears things are back to normal and Silverman has regained control of her account. (And might want to change up her passwords or invest in a password manager.) That or this was all a giant ruse and Silverman is still secretly stanning for Bernie Sanders, which is a totally unlikely, but would make for a decent movie plot.