Earlier today, the FBI announced that it will not recommend Hillary Clinton, the presumptive Democratic nominee for president, be indicted for her damn emails. And, as they do, Twitterers took to Twitter to let people know they have thoughts. Like red and blue moths to the flame of political scandal, people made jokes, or at least their best guess of what jokes are. Enter Mike Huckabee, the corny dad of the religious right, with a tweet:

Hillary may not be POTUS, but she'll be on the Winter Olympic team for ice skating, no one has successfully skated on more thin ice than her

Huckabee obviously thinks this is a good joke. (“I’d give it a Hucka-B+,” he probably said to the people that work for him. “Mike-drop,” he probably wrote in an email to the people that work for him, who weren’t around for the grade pun.) It is, however, not a good joke. It’s not even a bad joke, because it’s not really a joke; it’s like a brainstorm for an eventual bad joke.

Still, there are no bad ideas in a brainstorm, so I’m here for you, Muckabee. There’s a bad joke in there, and as a champion of bad jokes, I want to help. Here is how to fix the tweet, in only six steps:

1. The joke breaks down immediately: “Hillary may not be POTUS.” Besides being clunky, this also doesn’t really say anything. No one claims that Hillary Clinton is currently the president of the United States of America. Barack Obama is the president. It’s clear that Hucks had the second part written first, but didn’t want it to be misconstrued like he was complimenting the presumptive Democratic nominee.

That said, I admire the desire to try to tie two of your problems with Clinton together, as the best roast jokes do. So, let’s try with a cleaner, momentum-building setup like “Hillary shouldn’t be running for president, she should…” Which gives us:

Hillary shouldn’t be running for president, she should be on the Winter Olympic team for ice skating, no one has successfully skated on more thin ice than her.

Hillary shouldn’t be running for president, she should be on the Winter Olympic team for ice skating: no one has successfully skated on more thin ice than she has.

3. Having “ice skating” in the setup really takes away from the surprise of the punch line. Also, while we’re taking out words, “successfully” is four syllables and completely useless. “Skating on thin ice” is the metaphor you want to go for, Hucky, don’t make us wait. Don’t worry, there’s a fix that will also at least give the joke an A-to-B leap, instead of its current A-to-A mangle of words.

Hillary shouldn’t be running for president, she should be training for the Winter Olympic team: no one has skated on more thin ice than she has.

With the introduction of the training idea, the joke can be taken further:

Hillary isn’t running for president, she’s training for the Winter Olympics: no one skates on more thin ice than she does.

4. Also, come on man, when God gives you a sport like ice dancing, make Lemonade-level burns:

Hillary isn’t running for president, she’s training for the Winter Olympics: no one dances on more thin ice than she does.

5. But, here’s the thing, it’s summertime, baby. And the people want their jokes hot. No one is thinking of ice skating, with the Summer Olympics around the corner. The tweet should try to tie into that! 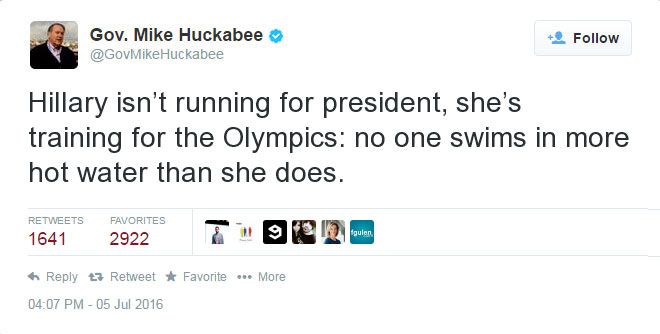 6. Not bad! Well, more accurately: Bad! That is a clean, concise bad joke (It’s 30 characters shorter!) But sometimes you got to just call in the pros. So, I reached out to Aparna Nancherla, a wonderful comedian and tweeter, whose new album, Just Putting It Out There comes out later this week. I requested a joke that involved the challenging ingredients of Hillary, the FBI announcement, and the Olympics, and she spun it into Twitter gold, or at least a bronze (ooo, another Olympics reference!): 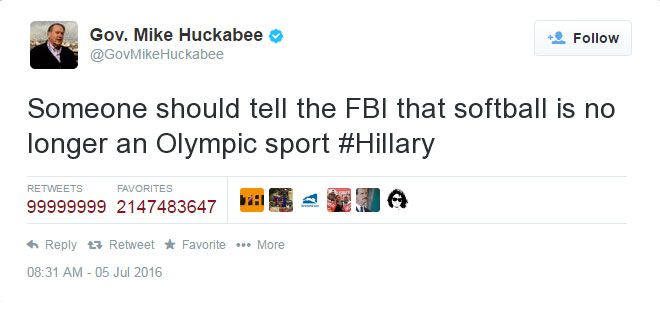 THE FEED
24 mins ago
the national interest
the national interest
Ron DeSantis’s Florida Is Where Free Speech Goes to Die
By Jonathan Chait
The governor once again shows he’s far more illiberal than the “woke” left he vilifies.
8:00 a.m.
encounter
encounter
Can Nasty Nestor Turn Around the Yankees?
By Ross Barkan
The pitcher has become an unlikely star for the Yankees. He’s just happy to be here.
7:00 a.m.
crime and punishment
crime and punishment
The Death Penalty Case That Went Too Far
By Lara Bazelon
Oklahoma is set to kill Richard Glossip, but he’s almost certainly innocent. Even Republicans there are in revolt.