Certain larger-than-life figures tend to become running characters in New York — Ed Koch, Anna Wintour, Donald Trump — and, for nearly our entire history, that cast has included Roger Ailes. The Nixon adviser turned cable-news mastermind (and accused sexual harasser) first appeared in our pages in 1970, when the journalist Joe McGinniss was writing about the experience of plugging his book The Selling of the President 1968, in which Ailes figures prominently.

Barbara Walters had come after McGinniss hard in a TV interview: “Afterwards she says she is angry because she is a friend of Roger Ailes, who is a character in the book. She thinks I treated him unfairly.” (He replies that Ailes likes the book and has helped him promote it.) And when someone asks McGinniss how a particular politician might fix his TV image, the answer is simple: “I tell him to call Roger Ailes.”

Over the next few years, Ailes popped up here steadily as just such a fixer. He took on unpromising clients: Al D’Amato for Senate in 1980 (he won), Lew Lehrman for governor in 1982 (he lost to Cuomo, badly). Ailes’s second major triumph, after Nixon, was transforming George H.W. Bush into a tough guy in 1988, helping him roar past Michael Dukakis via a very low road. “The only question,” political columnist Joe Klein wrote, quoting Ailes, “is whether we depict Willie Horton with a knife or without it.” 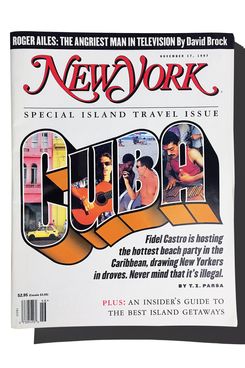 Soon after that, Ailes took over CNBC — “Intelligencer” reported that his employees hated him — and started another network called America’s Talking, a precursor to MSNBC. But those were merely a warm-up for his biggest role. In 1997, soon after Ailes began to build Rupert Murdoch’s Fox News Channel, David Brock — a right-wing agitator who had flipped to Clintonism — wrote a highly critical profile of Ailes. Its most eye-opening line nowadays: “Another close confidante was the capable Elizabeth Tilson, CNBC’s 33-year-old director of daytime programming … Ailes seemed ‘infatuated’ with the Marilyn Monroe look-alike, a former CNBC executive said. Tilson moved into a large corner office, and she and Ailes met frequently for lunch in a conference room that connected her office to his … This spring, Ailes and Beth Tilson announced their engagement. Ailes has said their relationship was strictly professional while they were working together.”

Michael Wolff, New York’s media columnist during the rise of Fox, pegged Ailes’s signature moves right away. In the days after 9/11, Wolff noted that international affairs were improbably becoming TV fodder again, quoting a media-executive friend who said, “Roger must be jumping out of his skin.”

But if any New York writer has got under the skin of Fox and Murdoch more than Wolff did, it’s national-affairs editor Gabriel Sherman, who joined the magazine in 2008 and has published at least half a dozen stories about Ailes, Murdoch, and Fox in print, with near-constant scoops online. In 2010, a story by Sherman about The Wall Street Journal under Rupert Murdoch led — presciently, given last week’s news — with an anecdote about Murdoch’s heirs, who were said to be embarrassed by Ailes’s network (if not his profits) and openly expressed disdain for him. In 2011, Sherman revealed that Sarah Palin had called Ailes — then paying her $1 million a year — after the Gabrielle Giffords shooting, and that Ailes had suggested she lie low; instead Palin put up a Facebook video about “blood libel,” annoying the hell out of her boss. Ailes won’t speak to Sherman, and after Sherman published his 2014 biography, The Loudest Voice in the Room: How the Brilliant, Bombastic Roger Ailes Built Fox News — and Divided a Country, he was threatened by Bill O’Reilly, who lunged for him at a party, shouting, “Drop dead, man!” (Sherman also ran into Megyn Kelly, whose response was “I’m sorry, but I can’t be seen talking to you” followed by “Roger Ailes is a great man.”)

Not quite two weeks ago, after Ailes was accused of sexual harassment by Gretchen Carlson, Sherman followed up with extensive testimonies from six more women; then followed that with a report that Megyn Kelly herself had told lawyers she too had been an Ailes target; then broke the news that Ailes was being removed; and, last weekend, as he was reporting out the financial and logistical particulars of Ailes’s departure, reported the accusations by Rudi Bakhtiar, yet another Fox News employee with a hair-raising harassment story. (He did all of his phone-calling and note-taking one-handed, by the way — he broke his arm last week.) The Times’ Lydia Polgreen, on Twitter, wrote that “the MVP Award this week must go to Gabe Sherman.”

*This article appears in the July 25, 2016 issue of New York Magazine.