Before we get to anything else, I’d like to formally apologize to Taylor Swift for the dozens of snake emoji I have left in comments on her Instagram account today.

You see: I was doing it for journalism. Snakes began cropping up on Swift’s Instagram account last week after news broke that Swift had secretly written “This Is What You Came For” for her ex-beau, Calvin Harris, whose fans started using the emoji in an attempt to both spam and shade Swift on Instagram. (When fans turn on pop stars and other celebrities, they often make their displeasure known by leaving lengthy strings of telling emoji in the comments of the Instagram, such as when Beyoncé stans flooded the Instagram of alleged Jay Z mistress Rachel Roy with bee emoji.)

Yesterday, as a prelude to the Snapchat showdown with Kim Kardashian West that would quickly consume Twitter, Kim herself made use of the emoji:

So today, I expected to see Swift’s Instagram response similarly covered in small cartoon serpents. But, as several people on Twitter also pointed out, the snakes are nowhere to be found.

The apparent and surprising lack of snakes poses an interesting question. Is Instagram automatically monitoring comments? Is Taylor’s team manually deleting every pictograph that might besmirch the House of Swift? One widely circulated tweet (since deleted) showed an Instagram warning for a user trying to leave a large block of snake emoji — was this real, and what did it mean? 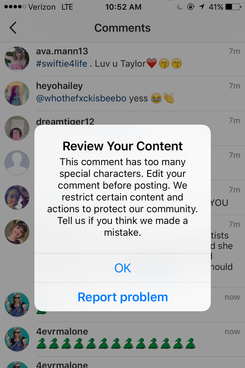 I set out to discover the truth. I tried commenting using snake emoji in increasing increments and found that Instagram let me post anywhere between one and 26 snake emoji before notifying me that I had to review my content.

The question is: Did the comments stay up? Unfortunately, Instagram comments, once written and posted, are extremely difficult to track. Some seemed to last for at least a few minutes, but they quickly get buried by dozens of other comments. Weirdly, attempts to track the comments by tagging friends didn’t work: The friends received no notifications, and, when I asked them to look through the comments, they couldn’t find them.

Was a man or machine monitoring Swift’s account? Comments with other emoji still live on Swift’s Instagram: Strings of hearts, for example. Is it possible that the snakes were deleted, or that Instagram was possibly hiding them from gossipy eyes? Or was it just that not nearly as many people were emoji-bombing Swift with snake emoji as were wishing her well?

When I reached out to Instagram, the company declined to answer any of my specific questions about whether or not the app is monitoring Swift’s Instagram page and deleting comments containing snake emoji. Instead, an Instagram representative offered the following statement: “We’re always looking for better ways to help people prevent spammy or inappropriate comments on Instagram.”