Pokémon Go: If you’ve been outside in the last three days (or read this website), you know it’s big. You can play it anywhere in the real world!

A tipster informs us that he was able to capture a Rattata while visiting the concentration camp, a prominent location in the Nazi’s Final Solution to eradicate the Jewish people. 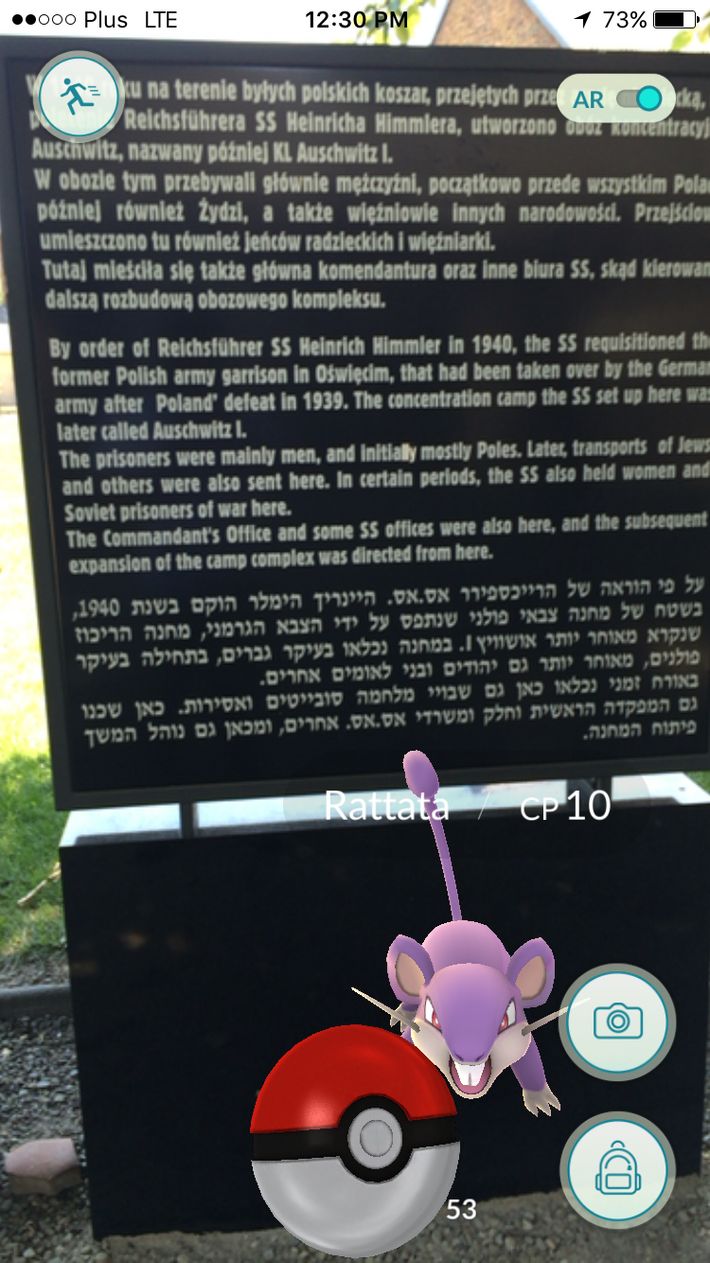 Players can capture Pokémon pretty much anywhere in the game, but certain locations, designated as Pokéstops, are tied to named real-world locations. According to our tipster — himself not a Pokémon expert — there was a “blue square thing” at Auschwitz, indicating that the area is likely explicitly marked, probably as a Pokéstop. (Pokémon Go has not yet officially launched for users in Europe, so confirming this is difficult.)

That the location would appear in the game is not directly the fault of the developer, Niantic. The game uses location data gleaned from Google Maps, and Pokéstop locations are often imported from user suggestions made on a previous Niantic game, Ingress. Pokémon themselves are randomly distributed on the map: A developer didn’t say, “Let’s make sure there are some Pokémon at Auschwitz.” On the other hand, it would be simple to restrict certain areas and prevent Pokémon from appearing in or around them.

Games like Pokémon Go pose, let’s say, unique challenges for developers: When should they step in and tailor the experience, and when should players be allowed to interact with the map as it exists in real life? You can, for instance, visit locations in and around the Freedom Tower in Manhattan, otherwise known as Ground Zero. The Daily Tar Heel reports that a controversial statue of a confederate general is a Pokéstop. In Bed-Stuy, Brooklyn, the writer Muna Mire points out, many of the Pokéstops are murals painted as memorials.

That you can still play the game at Auschwitz is especially surprising, however, given that Niantic ran into this exact problem last year, with Ingress. Players could battle for control of real locations, including those inside Auschwitz, Dachau and Sachsenhausen. In this case, it seems as though Auschwitz isn’t a “gym” — and therefore you can’t “control” it — but it’s still a marked location where you can, incongruously, catch cartoon monsters.

At the time, the company said in a statement that, “After we were made aware that a number of historical markers on the grounds of former concentration camps in Germany had been added, we determined that they did not meet the spirit of our guidelines and began the process of removing them in Germany and elsewhere in Europe.”

Yes, You Can Catch Pokémon at Auschwitz