Over the past few weeks, Facebook has rolled out several changes to the way it serves ads to users. The company even started blocking ad-blockers. (Though success there has been a little shaky.) Since all users, at least in theory, are now being subjected to ads whether they want to see them or not, Facebook created a new ad preferences system to let people further customize their likes and dislikes. Also it’s kind of fun to see what Zuckerberg’s robot army thinks floats your boat.

To see which people, places, and things Facebook’s algorithm already thinks you are into, head here. From there, you’ll see a list of potential interest categories like “Technology,” “News and entertainment,” and “Lifestyle and culture.” Here’s what that last one looks like for me. Apparently, Facebook thinks I’m very liberal and an avid reader who lives away from her family with a penchant for adopting new technology late. (Not a half-bad read, Facebook.) 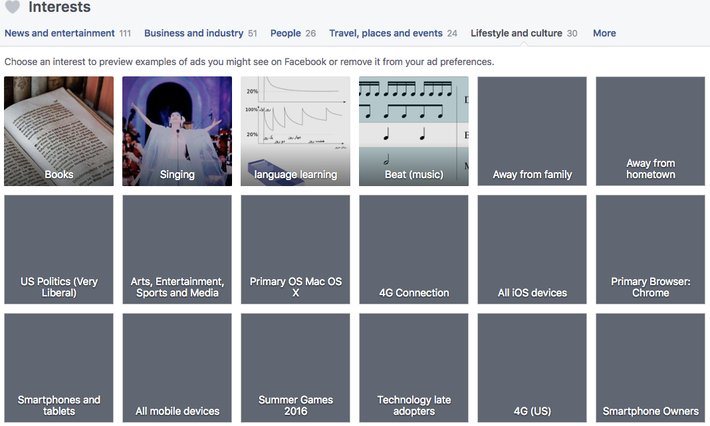 If any of the interests aren’t, well, interesting to you, it’s easy to delete them. Just hover your curser over the icon you want to remove and click the X in the upper righthand corner. You’ll see a notification that the interest has been removed. (Sorry, Salesforce Marketing Cloud.)

Ad preferences aren’t new to Facebook, but the updated system is a lot simpler to use than the last time I attempted to customize my Facebook ads and stop myself from seeing nothing but wrestling promos once and for all. And if you have to see ads (and you do, otherwise I’ll be out of a job), they might as well be things you’re interested in. Excuse while I go delete my interest in “Handheld PCs.”

THE FEED
21 mins ago
talking about the weather
talking about the weather
This Is a Snow Lovers’ Nightmare
By Benjamin Hart
New York has broken a snowless record — and there’s no end in sight to this gray misery.
9:30 a.m.
2024 vision
2024 vision
2024 Looks Very Dark for Senate Democrats
By Ed Kilgore
Or why the party really, really needs Joe Manchin.
1/28/2023
tyre nichols
tyre nichols
Memphis Police Disband Controversial SCORPION Unit: Updates
By Chas Danner
One day after the city released footage of Tyre Nichols’s arrest and beating, the police department deactivated its embattled violent crimes unit.