A well-known but often unacknowledged fact of modern life is that the streaming-video market is propped up by garbage. According to the Netflix tracking website Allflicks.net, there are currently 5,239 titles available to American subscribers, but I’d challenge you to name a dozen. Once you get past the first hundred or so titles, the catalogue becomes uncharted territory, audio-visual chum ignored by the pop-culture Establishment. The fact of the matter is that Netflix doesn’t need to have a great catalogue, because it knows that convenience outweighs quality here. You could purchase a rental at higher relative cost, or more likely, you will find yourself bored on a Friday night, settling for whatever their algorithm suggests.

One of the most crucial components of Netflix is its sprawling collection of crappy kids’ movies. Kids do not care about quality: They will watch anything that is bright and has CGI animals. And that is how I found myself watching an abominable feature called Leo the Lion last Friday.

Leo the Lion is famous on Tumblr, of all places, because that is where ironic fandom of cartoons meant for babies lives and grows like a benign tumor at the core of the World Wide Web. Currently floating around the network is a large collection of bullet points about how terrible this absurd bootleg of The Lion King truly is.

The craziest part about Leo the Lion is that, thanks to a technical snafu (or possibly a by-product of Netflix’s automated system), it is actually two movies. Tumblr users noticed that the subtitles for the film do not line up at all with what happens in the film. Broadly, the arcs are similar but character names, terminology, and jokes are completely different.

Graphically, the film is a nightmare. In video games, there is a glitch called “texture pop-in,” where the texture graphics on models look blurry and muddy until the full graphic loads in. Leo the Lion looks like a video game whose textures never load correctly.

Briefly: A lion named Leo, who is a vegetarian, has to escort two child elephants, a leopard, and a monkey to a magical lake somewhere in the jungle. This is referred to in the audio as “the heart of the jungle.” In the subtitles, it is known as the “Lake of Milk.” 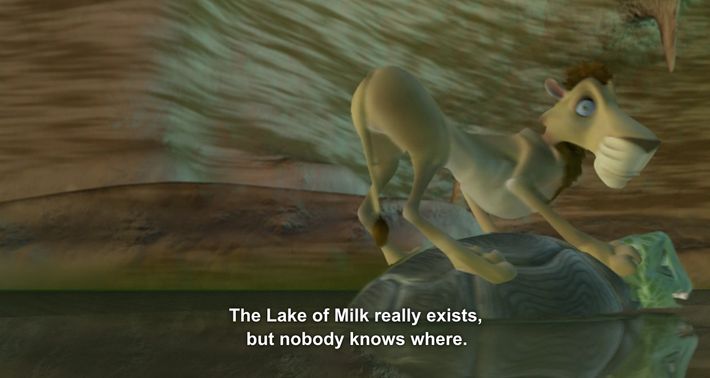 In the subtitles, Leo’s vegetarianism is not referenced at all until the very end of the film, and his full name is Leo Bonecruncher.

Here are some other baffling bullet points from user kittensinsocks24:

— The narrator seems really out of place like he talks 24/7 in scenes that clearly should have quiet??

— They are NOT lying the subtitles are like a completely different script, including paraphrasing and name changes, almost all of which matches up better with the lips than the current audio

— “that night was filled with…(sultry voice shift) such promise”

Along the way, they are hunted by a Mufasa-like evil elephant named Zanco, scheming to take over the herd, as well as some hyenas ripped off from The Lion King complete with bad Cheech Marin impersonations. 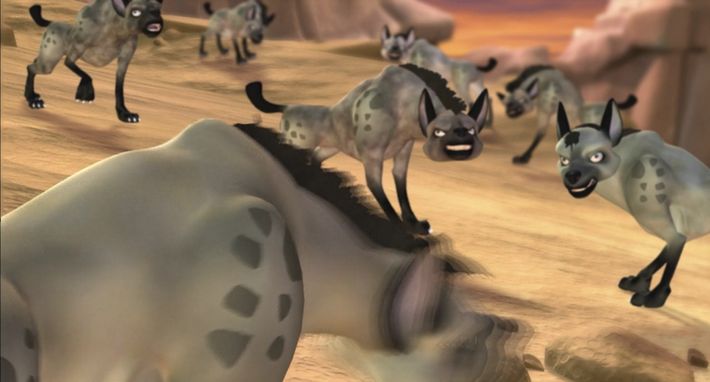 It is a bizarre film. A scan of the credits reveals that it was produced in Italy in 2013, which goes most of the way to explaining how the film ended up in its current state. Its subtitles appear to be a more literal translation of the film, its spoken audio track a localization. That would certainly explain other confusing elements, such as a misguided “joke” in which a mother zebra is tricked into breast-feeding the children of the group. 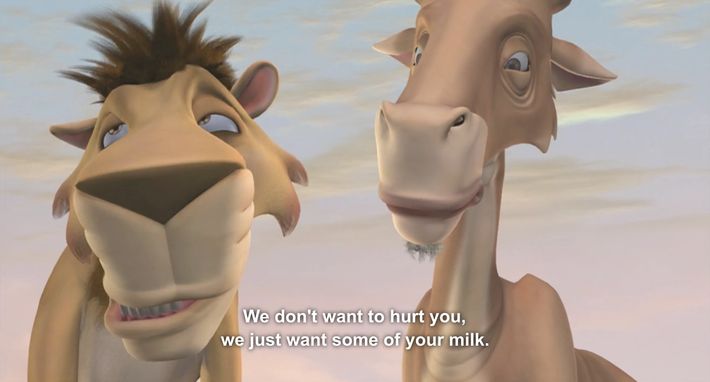 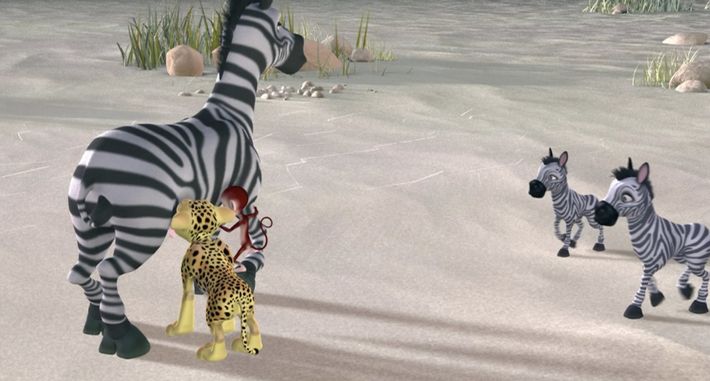 Oh, also, at the end of the film, after rescuing the baby elephants, Leo marries their mother and they have elephant/lion hybrid children. A majority of notes I took while watching the film end with three or four question marks (“hamlet-quoting chameleon????” is apparently not a fever dream I had).

So Leo the Lion is crap. But that’s okay! Because, it doesn’t have to be more than crap. The difference between the cost of licensing a movie like Leo the Lion and the potential gains for Netflix is a very wide chasm. I bet that a bunch of parents, after working their way through all of the halfway decent CGI-animal movies, had this Lion King rip-off appear in their recommendations and said “Sure.”

And that is how, in 2016, I ended up watching a film about jungle creatures frolicking in a pool full of milk (where did the milk come from? Nobody knows). What Leo effectively demonstrates — besides the fact that hell is real and God is dead, if xe ever even existed in the first place — is that the streaming-video websites are powered by bored children with undiscerning taste and a lot of free time. Netflix lures you in with big-name titles every month, but it keeps you around with D-grade trash. 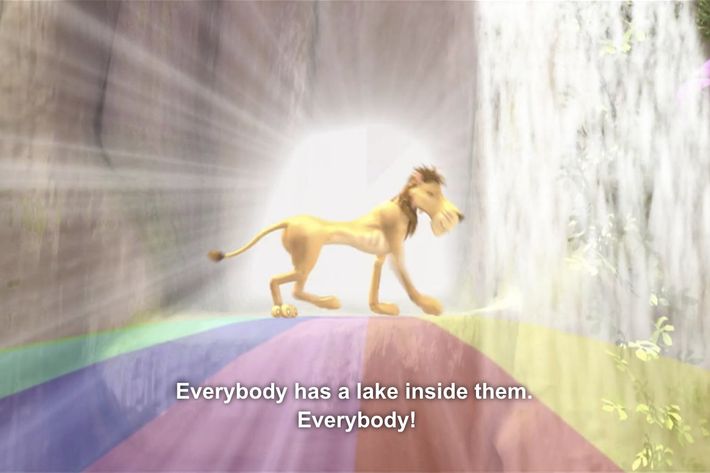