The Republican nominee is sharpening his attacks on the legitimacy of our political system. Two weeks ago, Donald Trump told a crowd in Pennsylvania, “The only way we can lose, in my opinion, I really mean this, Pennsylvania, is if cheating goes on.” Earlier this month, he made a similar suggestion in Ohio, then told a crowd in North Carolina that if the state’s voter-ID law remains suspended, Clinton voters will go to the polls “15 times” each. The first general-election ad of Trump’s campaign premiered Friday. This was its opening image: 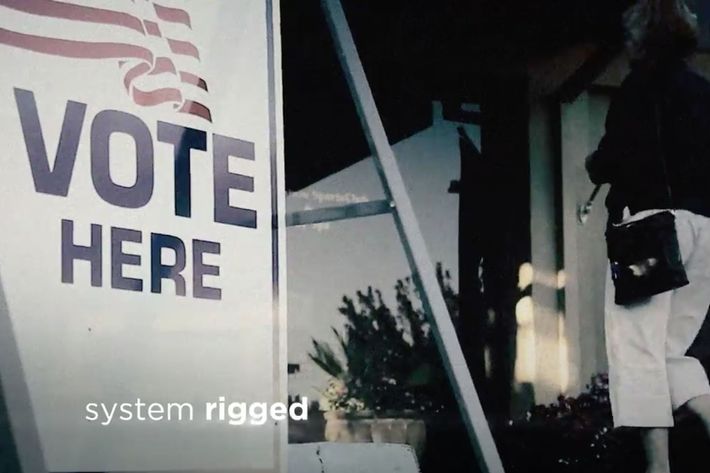 Trump’s disciplined messaging about why voting for him might not matter has driven up the “untrustworthy” numbers of American democracy. Last week, Pew Research found that only 11 percent of Trump supporters were “very confident” that November’s vote will be “counted accurately,” while 49 percent of Clinton backers said the same. On Monday, a Gallup poll found that 52 percent of Republicans say “voter fraud” is a major issue in this election; only 26 percent of Democrats agreed.

These developments have produced some pearl-clutching among #NeverTrump Republicans.

Longtime Republican operative Steve Schmidt told the news site that Trump’s predictions of widespread voter fraud were “an assault on some of the pillars that undergird our system,” adding, “People need to understand just how radical a departure this is from the mean of American politics.”

Steve Schmidt was John McCain’s chief strategist in 2008. Here is something McCain said that year, during a nationally televised general-election debate:

We need to know the full extent of Senator Obama’s relationship with ACORN, who is now on the verge of maybe perpetrating one of the greatest frauds in voter history in this country, maybe destroying the fabric of democracy.

McCain’s dire warning was no aberration. The idea that community organizers (who encourage low-income black people to vote) are “destroying the fabric of democracy” was already a commonplace notion in the GOP of eight years ago. As the Nation’s Ari Berman wrote back in February:

The GOP’s fraud crusade goes back to the George W. Bush administration. The 2000 election in Florida, which was marred by a disastrous voter purge of alleged ex-felons, empowered a new right-wing voter fraud movement, which hyped the threat of fraud in order to restrict access to the ballot for partisan gains. The Justice Department was taken over by ultra-conservatives like Attorney General John Ashcroft who made combating fraud a top priority. US Attorneys in states like New Mexico and Washington were fired for not undertaking new prosecutions, and new voting restrictions, like Georgia’s voter ID law, were approved by the DOJ’s Civil Rights Division over objections from career lawyers. Rick Hasen dubbed these people the “fraudulent fraud squad.”

There are many ways in which Donald Trump is a uniquely irresponsible Republican nominee. Mitt Romney never called Barack Obama “the founder of ISIS.” John McCain never joked about “Second Amendment people” taking out his rival’s Supreme Court nominees. Neither mocked the disabled, called Mexicans “rapists,” retweeted white supremacists, or promoted policies of overt religious discrimination.

In her general-election campaign, Hillary Clinton has focused on Trump’s unique outrages, disassociating his “dangerous” qualities from those of his party. As a strategy for winning over those Republicans who are ready to recognize the ugliness of their nominee — but not of the institution that made him its leader — this rhetorical move makes sense. But it also threatens to obscure how many of Trump’s most dangerous ideas are extensions — or, in some cases, mere reiterations — of Republican orthodoxy.

When Donald Trump demonizes American Muslims for electoral gain, suggests the United States can violate international law in its fight against terrorism, hypes the threat posed by undocumented immigrants, and suggests that our nation’s elections are plagued by widespread voter fraud, he is walking a path broken by many Republicans before him.

For over a decade, the GOP has attempted to solve its problem with minority voters by enacting electoral reforms that reduce their presence at the polls. To rationalize such anti-democratic reforms, the party invented a crisis of democratic legitimacy. One year after McCain’s remarks about ACORN, a Public Policy Polling survey found a majority of Republicans believed the organization had stolen the election for Barack Obama.

Now, as Trump attempts to rationalize his potential loss by hyping that same fictional crisis, “principled conservatives” are performing their outrage. The least they could do is perform their shame.