A scenario: A runaway trolley car is careening down a track. Five people stand in its path, unaware of the imminent threat. You stand at the intersection of two different tracks and could, if you chose to, divert the trolley onto another track where only one person would be killed. Do you divert the trolley, intentionally killing one to save five?

Now consider the same scenario, except that instead of one person on the track, it is Harambe, the meme martyr primate.

This is one of the many online variants of the classic trolley problem. Developed in 1967 by Philippa Foot, the trolley problem attempts to render into visceral example the thorny questions of utilitarian moral theory. Will you make the intentional decision to kill, or let events unfold without intervention? Either way ends in pain.

A runaway trolley is about to create 5 trolley problems. Do you pull the lever and divert it, so it only creates 1? pic.twitter.com/hrlf8tpoVm

The trolley problem, specifically the particular crude illustration constantly being remixed, has been floating around the web for a while (crowdsourced encyclopedia Know Your Meme traces it to 4chan). Its simplicity resembles the homespun charm and aesthetic malleability of rage comics.

Lexically, the trolley problem also provides an easy template to riff on. In April of 2015, Kyle York published “Lesser-Known Trolley Problem Variations” on McSweeney’s, including variants such as “The Real Stinker” (“But get this: that one worker? It’s your fucking mom. Bet you weren’t expecting that shit, were you?”).

To that end, Aljoša Toplak and Haris Sehic created the Facebook page “Trolley problem memes,” which posts, well, you know. “[W]hen you think about it you see that it can be modificated in so many ways: you can recreate real life events, paradoxes, other famous thought experiments,” Toplak told the Huffington Post. “There are so many possibilities!”

And some of those possibilities are elaborate, to say the least. 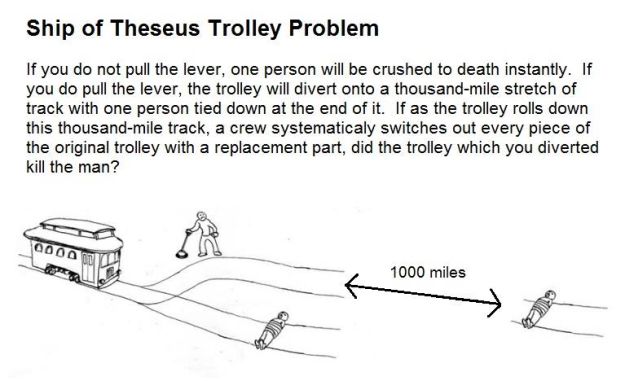 There are trolley problems about libertarian principles …

Trolley problems that combine not with other ethical dilemmas, but with other meme formula …

And some that are just weird.

All of these feed into a larger content ecosystem of philosophy memes, where the objective is often to one-up other memers in creating the most complex thought experiment. Ones that are almost Escheresque in their construction.

Without overly complex thought experiments, however, academics might be put out of a job.