At a holiday party last year, a friend pulled out his phone and showed off a Twitter account, @DrinkLandshark. It seemed like a pretty normal, if safely boring, brand account — no @DennysDiner–ish “Landshark is lit af” in sight.

It was mostly RTs of people enjoying Landshark Lager, put out by Jimmy Buffet’s Margaritaville empire (though actually brewed by Anheuser-Busch). Then my friend revealed that he and two other people had been running it for nearly six months, without Landshark’s knowledge, consent, or payment.

In a world where @nihilist_arbys has 212,000 followers, a truly weird prank is now running an almost completely straight-faced brand Twitter account. Granted, this is pretty much like applying to work at Sears, selling shoes there for 16 years, meeting your wife and having two kids, until you slip a disk and get laid off, all for the lulz, but — wouldn’t that be a great prank?

Eventually, Parrotheads found the account, and there were plenty of pics of people tagging @DrinkLandshark at while enjoying an ice-cold Landshark at the beach or on a boat, #FinsUp style.

Unfortunately, the account was shut down today. I spoke over IM with one of the people who ran @DrinkLandshark’s Twitter account for a over a year to get the full story.

How’d you come up with running a brand account for Landshark beer for free?

So, I’m a cheap drunk. One day, I was at a beer warehouse and decided to pick up Landshark on a whim. I drank the 12-pack in — let’s pretend it was a couple of days while my partner was out of the country. That weekend, two friends came to where I lived, and I was telling them that Landshark was a perfectly good nothing beer. It’s crisper than a Bud Light, and so on.

One friend went to tag them on Twitter with my quote about it, and we discovered there was no Landshark Twitter account. A few beers later, my friends and I were riffing what on-brand Landshark tweets would be.

My partner came back from her trip, and eventually, as we’re all drunk riffing on this in the living room, she helped put together a master document that we scheduled out on Tweetdeck, including weird things like wishing Gloria Steinem and Michael Ironside happy birthdays.

But the common thread was that we wanted it to consistently be “on brand” and not insulting toward those who loved Landshark or the Anheuser-Busch company itself, which makes Landshark. 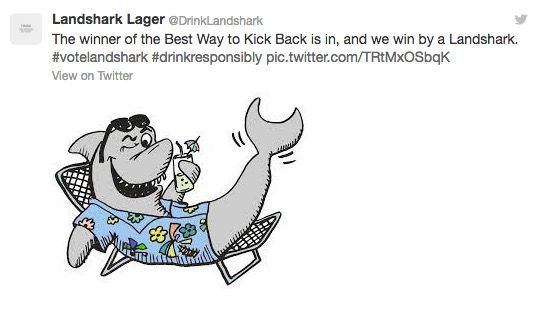 So that’s the how. I guess I’m wondering, what is the “why”?

My friends and I just like to come up with weird ideas that we pour our resources into with little payout. Constantly building jokes. A few beers into the night and it went from “Landshark doesn’t have a Twitter account” to “We will be Landshark’s Twitter account.”

Somewhere in between was “What would you even tweet if you were Jimmy Buffett’s official beer?”

So you had a master doc you worked off and pre-scheduled in Tweetdeck. How much time were you guys spending on this?

Honestly, a lot of the groundwork was laid that first night, and a few days after. But we had probably 100-plus jokes, so we were able to really stretch it out for months on end. After that, we’d just kind of schedule as other jokes came to us — though in the end it all kind of petered out, and to keep up the “brand presence” I started mostly retweeting Landshark fans.

When did Landshark fans start to discover your account?

It took a little while, but it gradually built up. I feel like it was people discovering it the same way that we discovered it: They wanted to tweet the beer they were having.

And that eventually just grew in numbers and legion, though it’s funny that it always kind of ranked in the hundreds for what was supposed to be a “major brand” that I was lovingly pretending to be.

What’s the typical Landshark fan like, would you say?

From everything I saw, it’s just kind of your typical middle-American that likes to have a good time. Landshark itself started because Margaritaville and Corona had some sort of falling-out, so they made their own similar beer. So I think it’s similar to the sort of people that want to chill out at the lake or beach and put a lime in their beer.

It’s somebody who’s maybe a little different than Joe Six-pack. A lot of people sent pictures from their boats or the beach or a marina dock. It’s very … Jimmy-Buffett-fans-who-want-to-have-a-good-time vibe.

@DrinkLandshark The elusive "land shark" chasing down my dad in #OBX ! pic.twitter.com/HqQ1UYXp9K

So you guys actually had the official Landshark account in Canada thinking you were the real thing?

Yes. Someone sent a complaint about finding wood in their beer, and the Landshark Canada account sent them to us. I panicked a little, as it seemed to spell that my terrible joke might have gone too far, in some ways. And how do you handle it? I sent them the Anheuser-Busch comment form with a joke about it being hard to resolve things in 140 characters.

There was a slight part of me that wondered “What if this is somebody in Canada pulling my exact same weird joke?”

@LandSharkCA found a tiny piece of wood in your beer. What're you going to do about it pic.twitter.com/EXWOTKseYH

@GraysonHestir Hi there! Are you from Canada or the US? To clarify this is the Canadian LandShark channel. :)

@GraysonHestir We are sorry to hear that and encourage you to reach out to @DrinkLandshark.

So you got shut down by Margaritaville. What was that like?

I wouldn’t call it shut down, quite. I chose to deactivate the account after getting three DMCA takedown notices. I had originally joked that if it ever happened, I’d do my best to hand over the keys to Margaritaville. But it seemed that they were less than amused from the DMCA language, so I decided that maybe I should just pull out of the game.

What will you miss most about running @DrinkLandshark?

There was just something to the earnest, uncynical tweets to a domestic beer that made me happy in some way totally insulated from my East Coast cynicism. Like a glimpse into a slice of the American life I never see.

THE FEED
9:01 a.m.
in the capitol
in the capitol
The Hecklers Have Won: The Polite State of the Union Is Dead
By Ben Jacobs
Marjorie Taylor Greene and other vocal Biden detractors turned it into something like a rowdy parliamentary session. Expect that to continue.
8:00 a.m.
games
games
Why You Should Root for the Eagles This Sunday
By Will Leitch
It’s not only because I don’t want their fans to come after me.
7:56 a.m.
early and often
early and often
Biden Springs Trap for Republicans in State of the Union
By Ed Kilgore
Biden vowed to “finish the job” in the next two years (or maybe the next term), and expertly used Republicans’ rowdiness against them.

2/7/2023
early and often
early and often
Democrats’ Huge Primary Shake-up Won’t Change the 2024 Race
By Ed Kilgore
Displacing Iowa and New Hampshire will generate a lot of drama. But it won’t matter if Biden is the nominee, and the new schedule may not stick.
2/7/2023
tremendous content
tremendous content
Melania Trump Was Mastermind Behind ‘Hero Dog’ Story
By Margaret Hartmann
Should Melania have been in the Situation Room for the al-Baghdadi raid? No. But her dog idea was no dumber than anything her husband did.
2/7/2023
bird talk
bird talk
Meet Brooklyn’s Newest Power Couple
By Matt Stieb
Recent bald-eagle sightings are delighting human visitors and terrorizing bird residents in Prospect Park.
2/7/2023
police brutality
police brutality
Two of the Cops Who Beat Tyre Nichols Had Records
By Matt Stieb
The Memphis Police Department severely lowered its qualifications for recruits in recent years.
2/7/2023
just asking questions
just asking questions
What Fresh Hell Is the New Bird-Flu Outbreak?
By Benjamin Hart
Epidemiologist Katelyn Jetelina on how to think about the virus’s recent worrying trajectory.
2/7/2023
poll position
poll position
Biden Is Trump (When It Comes to Popularity)
By Ed Kilgore
Biden hopes tonight’s State of the Union address will sway voters, but there’s growing evidence that opinions of any president are hard to move.
2/7/2023
early and often
early and often
Trump Wants to Divide Republicans and Conquer DeSantis
By Ed Kilgore
Nikki Haley is no threat to Trump, who would prefer a large field to muddy the track in his real primary race against Florida‘s governor.
2/7/2023
what we know
what we know
Horrifying Scenes of Quake Damage From Turkey, Syria Emerge
By Chas Danner
The powerful earthquakes have flattened thousands of buildings in the region, and the death toll continues to mount.
2/7/2023
foreign interests
foreign interests
Trump Is Too Tough on Balloons to Be Antiwar
By Eric Levitz
The ex-president is simultaneously slamming Biden for insufficient toughness on China and casting himself as a peace candidate.
2/7/2023
the city politic
the city politic
Are Eric Adams’s Big Plans for the City Still Too Small?
By Errol Louis
As he enters his second year in office, Adams is sticking with his grind-it-out approach to governing.
2/6/2023
what we know
what we know
U.S. Recovery of Alleged Spy Balloon Continues: Updates
By Chas Danner
China claimed on Monday that a second similar balloon seen over Latin America last week was also just a wayward civilian craft.
2/6/2023
tremendous content
tremendous content
Don Jr. Is Ready to Laugh About the ‘Trump Baby’ Balloon
By Margaret Hartmann
While the Chinese spy balloon is no more, its cranky little brother is getting pampered by the Museum of London, giving Trump’s son a chuckle.
2/6/2023
substation attacks
substation attacks
A Pair of Nazis Allegedly Wanted to Blow Up the Baltimore Grid
By Matt Stieb
The alleged plot is part of a surge in far-right extremists looking to take out the electrical grid.
2/6/2023
ftx fallout
ftx fallout
FTX Even Had a Woo-Woo Life Coach
By Matt Stieb
Sam Bankman-Fried hired his own psychiatrist to coach staffers about “happiness” and to encourage them to go on dates.
2/6/2023
the talented mr. santos
the talented mr. santos
Here’s Every Single Lie Told by George Santos
By Matt Stieb
Navigating the many exaggerations and falsehoods of New York’s newest representative.
2/6/2023
the national interest
the national interest
Michael Lind, Case Study in the Perils of Discourse-Poisoning
By Jonathan Chait
How an intellectual talks himself into believing the GOP is the left-wing party.
2/6/2023
just asking questions
just asking questions
Should a 13-Year-Old Have Bariatric Surgery?
By Benjamin Hart
Sandra Hassink on what the new pediatric obesity guidelines she co-wrote do and don’t say.
2/6/2023
the economy
the economy
America’s Labor Shortages Are Good, Actually
By Eric Levitz
The upside of longer lines and faltering customer service.
2/5/2023
early and often
early and often
Has Pete Buttigieg’s Dream Job Turned Into a Nightmare?
By Ed Kilgore
It turns out Transportation secretary won’t be a quick and easy layover on the way to higher office for Mayor Pete.
2/4/2023
early and often
early and often
The Democrat Who Could Take Down Kyrsten Sinema
By Ben Jacobs
Ruben Gallego will try to fulfill the left’s dreams by challenging Arizona’s newly independent U.S. senator.
2/3/2023
early and often
early and often
House Republicans’ Assault-Weapon Pins Aren’t Just a Taunt
By Ed Kilgore
Owning the libs may be an added bonus, but Second Amendment absolutists clearly intend them as a threat against those who challenge gun rights.
2/3/2023
creature capers
creature capers
The Hunt Is on to Find the Dallas Zoo Bandit
By Matt Stieb
A suspect was arrested after police received a tip that the alleged bandit was visiting the aquarium.