Early this morning, someone impersonating pharmaceutical millionaire and gleeful troll Martin Shkreli sent an email to roughly 456 people, most of them journalists, offering an exclusive listen to a track off of Wu-Tang Clan’s Once Upon a Time in Shaolin, the infamous one-copy-only album Shrekli paid $2 million for last year. The recipients were not BCC’d. You can probably imagine what happened next. 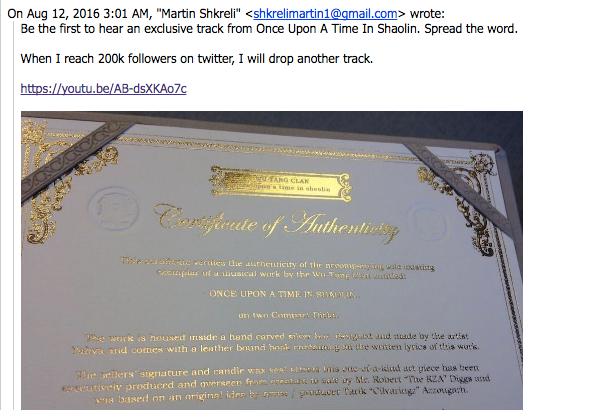 Yes: The reply-alls began. (I, lowly blogger that I am, was not included on this thread. It was forwarded to me by a colleague who is clearly illuminatus.)

Eventually, the real Shkreli was looped in on Twitter and denied his involvement in the email chain. He has also since been added to the original 456 people.

If you too would like to join this hellscape, just reply to Shkreli’s tweet. Assuming he hasn’t blocked you for being a “future welfare recipient” under the age of 30 masquerading as a journalist.

Does anyone want to be CCed to this massive email? Just reply with your email.

Here’s a small sampling of emails that have been sent since Martin got in on the fun. (Sorry, Holly.)

At this point, both myself and Microsoft Outlook have lost the ability to keep track of this runaway email chain. So I’ll just leave you with its most recent missive.