Smartphones are great: Never has so much human interaction been avoided by so many by such small screens. Mobile carriers, though? Historically, mobile carriers have been terrible.

It’s not entirely mobile carriers’ fault there’s so much confusion about data and data charges. When we worried about running out of voice minutes and going over 200 texts per month, we had discrete units to work with. A minute is a minute; a text is a text. But what, exactly, is an Instagram upload? A Snapchat video? A Twitter post? Can one even quantify the data cost of sending or receiving a dick pic?

You can, to a degree, track your data usage on most phones and most carriers, but it’s not easy. The carrier always knows how much data you are sucking down; you rarely do. It’s a sales model dependent on uninformed customers.

It’s also a sales model that works out well for carriers. A shocking number of Verizon and AT&T customers pay overage fees on a regular basis — 28 percent of AT&T’s customers and 20 percent of Verizon customers got hit at some point in 2015, per research firm Cowen & Co. T-Mobile customers simply get their data throttled when they hit their limit, avoiding overage fees but making the end of every month a fun trip back to what dial-up internet was like. Sprint markets an unlimited data plan — it’s just that under its base plan, only the first gigabyte of data is actually LTE high-speed. Everything that comes after that is at 2G speeds, which is just fast enough for you to put down your phone, go down to the corner store for a bag of Taki’s, come back, and have the rest of this article fully loaded.

Which is all a long way of saying I’m now even less fun at parties, because I’m cornering people to evangelize about Project Fi from Google.

Started as an invite-only service in 2015, before being offered to the general public in early 2016, Project Fi’s network switches on the fly between T-Mobile, Sprint, and U.S. Cellular’s cell and data networks. It starts at $20 a month for unlimited talk and text, and then costs $10 per gigabyte (or essentially a penny a megabyte) after that. You set up a data plan for how much you think you’ll use in a month (I currently have 3 GB, though I’ve never come close to hitting it), and at the of the month, Project Fi refunds back whatever you didn’t use back. Or, if you exceeded your data plan, Project Fi charges a penny per MB over the limit. Go over by 321 MB in a month? That’s an extra $3.21, no overage charge in sight. At the end of the month, you get a pleasant, entirely comprehensible bill. Here’s mine from June: 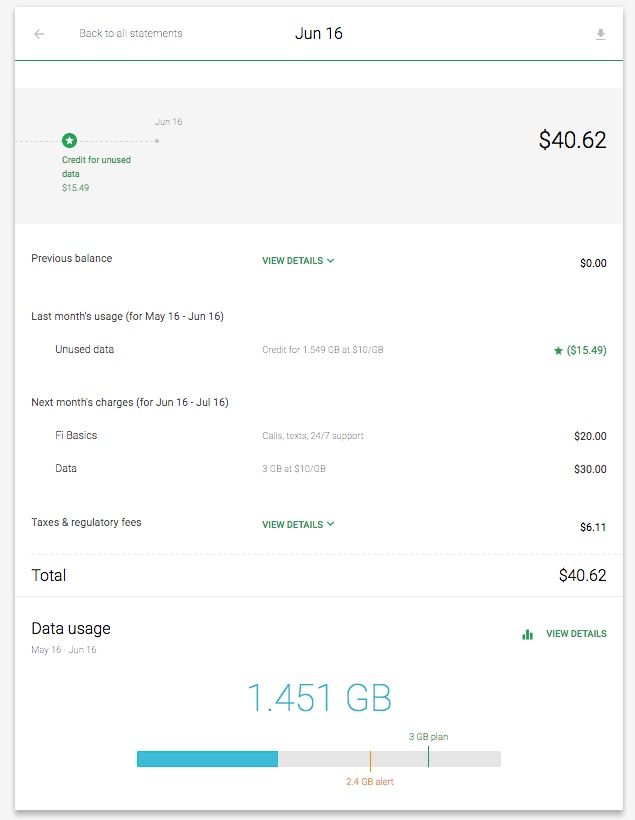 Besides having a phone bill that hovers around $40 a month now, there’s a couple extra bonuses. You can keep your phone number, and if you’ve been on iOS up until now, it’s relatively easy to transfer over all your contacts. Project Fi is good for international travel — data remains priced at the same level, and international calling rates are competitive and low-priced. And customer service is 24/7 and has you chatting with an actual person within a few minutes. (When I called AT&T to make the switch to Google Fi, I spent over an hour bouncing from customer rep to customer rep before I could finally move my phone number over.)

And the Nexus 5X is, uh, look, it’s fine. I’ve been using a Nexus 5X as my daily phone for about four months now, and it does everything fine. The back is plastic, and can get a little scratched up. Its 12-megapixel camera can take good pictures and can do slow-motion video, but nobody is gonna be blowing up your shots and putting them on the subway ads soon. The external speakers aren’t great. The fingerprint scanner in the back of the phone is nicely-thought-out, but it can be finicky, especially when it’s humid. But it runs everything I need and want just fine without slowdown — even some more demanding 3-D games. Its battery lasts all day without a struggle. Thanks to its USB-C charger, I can recharge the phone from empty to full in about 45 minutes. It fits in my hand nicely, making for easy one-handed subway reading. It comes pleasantly free of bloatware. But it’s not a phone you show off (though, really, if you are showing off your phone your problems run much deeper than how many megapixels your camera sports).

From the few minutes I’ve spent with a Nexus 6P, and the numerous orgiastic reviews I’ve read, it seems like a very nice phone. It’s got that heft and aluminum body that effectively communicates “this is expensive,” while still coming in a few hundred dollars cheaper than the Samsung Galaxy 7 or iPhone 6s. Its camera is currently about as high-end as you can get, and comes loaded with a hefty amount of RAM, a fast processor, and a ridiculously huge battery that’ll get you through a full 24 hours, even with a large and bright screen up and running constantly.

But the reason I get so weirdly passionate about Project Fi isn’t the phones they offer. It’s that Fi has fully embraced that cell-phone data is now a commodity, the same as the gas for your car. But we’ve been living in a world in which you bought your car and your gas from the same company, and as a fun bonus, your car did not come with a fuel gauge. While nearly every other carrier is using that to run up the numbers in their favor, Project Fi puts a gauge on my phone, showing how much data I’ve used at any given point during the month. 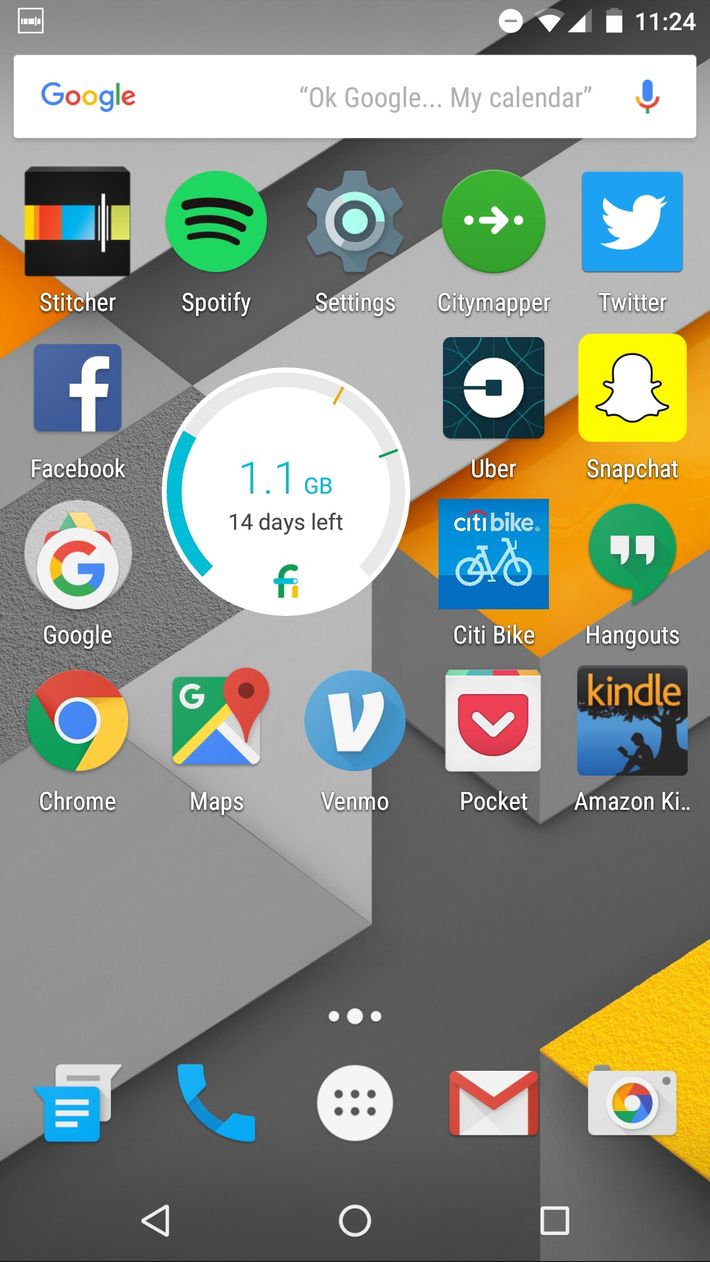 It means I am suddenly aware of what it costs to do anything on my phone when I’m not on Wi-Fi. I now know if I forget to download the new episode of The Bodega Boys podcast over Wi-Fi before I head out the door, it’ll cost me about $.87 in data to stream it. If I’m riding the Q train and I really, really have to watch a YouTube video a friend sent my way, I gotta be okay with paying the $1.34 it’ll cost me. I’m slightly stingier with my cell-phone data while out in the city which, all things considered, is not that bad a thing. It’s not like I need more time in my life looking into a glowing rectangle.

A lack of transparency in how everything was priced is what led to the clusterfuck of two-year locked-in contracts and subsidized $199 phones you didn’t get to keep, until T-Mobile essentially pushed their way into the space, severing the connection between buying a phone and buying cell-phone service. It was an offering so compelling that every other carrier was forced to follow suit.

The transparency of efforts like Project Fi and others (Republic Wireless offers a plan very similar and with slightly more choice in cell phones you can use) could do the same thing for data plans. For years, consumers thought they were getting a free lunch with unlimited data, but just like that $199 iPhone you got with a two-year contract, you probably were buying more than you needed without ever really seeing what you got. With Project Fi, I get a rational, easy-to-understand data plan — and the hope that other carriers will soon have to play catch-up.