Twenty summers ago, New York columnist Jacob Weisberg convened the Republican operatives James Pinkerton, Dinesh D’Souza, Heather Higgins, William Kristol, and Andrew Ferguson to discuss the presidential race, and more particularly how Bob Dole might revive his flagging campaign against Bill Clinton. Much like Donald Trump, Dole had been losing for months; unlike Trump, he didn’t see any real surge in his poll numbers till the final week of the campaign.

The group’s roundtable discussion seems oddly prescient, as another Clinton runs to continue the work of a Democratic administration. So try this quiz: Which of these quotes are from this summer, and which are from our 1996 cover story? 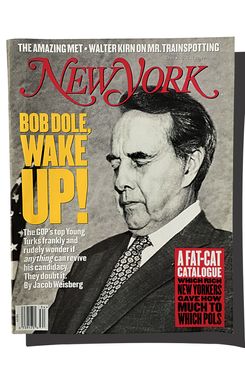 2. “From the conservative point of view, there is a tactical debate over whether a [Republican] victory is desirable, even if it were possible … A Clinton presidency serves certain objectives for the right. It gives us a target. It gives us a focus. It gives the Republican Congress someone to work against.”

3.“A winning Republican agenda has to tie together the upscale suburbanites and the lower-middle-class Evangelicals. When Republicans have succeeded, they have done that.”

4. “Clinton has moved — at least rhetorically — dramatically to the right, and is now running as an Eisenhower Republican.”

5. “A strategic decision was made early on, which was that the Republicans, after losing the budget debate and, consequently, losing their nerve, ceased to be a party that wanted to be Big Vision, High Principle, High Concept, and became a party that was driven in large measure by polls. They sat in a large room with a lot of pollsters back at the beginning of the year, and they said, ‘Look, even though the economy looks like it’s going well now, when the tidal wave of the economy comes crashing down, Clinton will be blamed and we won’t.’ ”

6. “I’ll make a flat proposition: We’ll never elect another pro-life president … the country has reached a consensus. [Christian conservatives] — they haven’t. The country has.”

7. “I’ve heard Gingrich say ‘We need a coalition of all believers.’ … I mean, in a country where there are more Muslims than Episcopalians, you’ve got to be careful.”

8. “One of the really unfortunate things that’s occurred is this increased race consciousness that we’ve seen over the last 30 years, which is one of the reasons why I think it’s a tremendous mistake to not talk about the moral horror of racial preferences … People are overwhelmingly with us on this issue.”

9. “You don’t want to run a campaign where you are simply reacting to the other side, where you are counting on them to blow it in some way … [The candidate] needs to have an affirmative message.”

10. “Underline the if. That’s the key — if [the Republican candidate] can do what few believe he can do, which is to stay on message. It’s easy for us sitting here in Washington to transmogrify [him] into Ronald Reagan. But …”

*This article appears in the September 19, 2016, issue of New York Magazine.

+Comments Leave a Comment
Are These Quotes From This Summer or 1996?