Michael Gerson, the former George W. Bush speechwriter turned Washington Post columnist, has been an admirable voice of dissent against Donald Trump. His latest column, headlined “If Trump Wins, Blame Obamacare,” advances the bold argument that Democrats share the blame for the nomination and potential election of an ignorant racist demagogue because they reformed the health-care system. In a bizarre way, Gerson’s seemingly tenuous connection between the 2010 law and the 2016 election is actually correct, but the causal link runs just the other way. Republican hatred of Obamacare exemplifies the madness that left its elite unable to stop Trump.

Gerson argues that the failure of Obamacare has produced the political atmosphere that gave rise to Trump. Obamacare failed, people concluded the Obama administration failed as a result, and therefore we have Trump. There are innumerable problems with this explanation. Begin with Gerson’s belief that President Obama is the cause of Clinton’s difficulties. “If Hillary Clinton loses … ” he argues, “it will be because she argued that the United States, with incremental corrections, is on the right track set by Barack Obama.” Except that Obama’s job approval is over 50 percent and rising, and he has been the most popular active politician in the country during virtually his entire presidency. What’s more, the Democratic Party is far more popular than the Republican Party. Clinton is dragged down by doubts about her personal honesty, but she is in a tight race despite, not because of, her association with the popular Obama administration. This fact alone is sufficient to completely sever Gerson’s chain of reasoning. But there is so, so much more wrong with his argument, and the delusions in his argument are worth considering.

Gerson argues that the law has failed dramatically. “Only 18 percent of Americans believe the Affordable Care Act has helped their families,” he writes. This may have something to do with the fact that Obamacare, by design, left in place the existing system for the majority of Americans who receive insurance through an employer, Medicare, or Medicaid. It created new insurance for the suffering minority of people who didn’t have it.

Gerson argues that Obamacare is failing by citing wisps of data. “Premium costs in the exchanges increased about 12 percent nationwide from 2015 to 2016,” he argues. “Current rates are being finalized, but it looks as if the increase from 2016 to 2017 will be double that.” It is true that premiums are rising. What Gerson does not mention is that they came in dramatically below projected costs. Even after the expected price correction, premiums in the exchanges will be $600 per person less than forecast. As a new Urban Institute paper explains, insurance in the exchanges will be less costly than the average employer-sponsored insurance plan.

Gerson holds up Obamacare as a symbol of governing incompetence. The website took a few weeks longer to work than it was supposed to: “The system’s federal website was launched with a series of glitches and failures that still make ‘healthcare.gov’ a byword for public incompetence in the computer age.” The putative failure of Obamacare is the cause of public anger at an incompetent government. “No issue — none — has gone further to convey the impression of public incompetence that feeds Trumpism,” argues Gerson. “If Trump wins, there will be a host of reasons, but one will be this dramatic failure of liberal governance.” 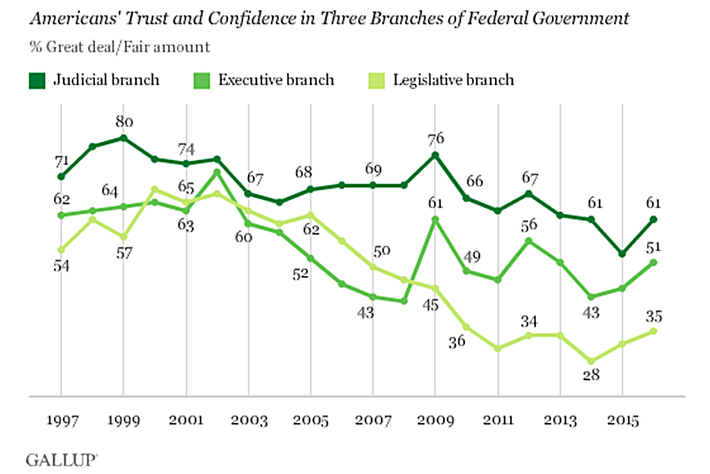 You know what might have harmed public faith in the competence of the Executive branch a wee bit more than Obamacare? Perhaps the administration for which Gerson worked. You know, the presidency that sold a war on the basis of false intelligence, failed to plan an occupation, appointed incompetent cronies throughout the federal government, botched the response to Hurricane Katrina, failed to regulate the financial industry, and allowed a pack of crooks to loot the government.

Now, Gerson is correct that the law has never been viewed with wide public favor. (At the moment, 40 percent of Americans view the law favorably, and 42 percent unfavorably.) This might be related to another fact that Gerson dwells on at length: the intense hatred Republicans harbor for it. “The law was passed in a partisan march, without a single Republican vote,” he writes. “Because of a poisoned legislative atmosphere, there is no prospect of legislative fixes to an unstable and perhaps unsustainable system of health exchanges.” It is true that Republicans placed intense pressure on every member of Congress to withhold cooperation from the drafting of the law. This meant that even though the law’s design followed many ideas Republicans had once liked, especially the exchanges that Mitt Romney had created in Massachusetts and then promised in 2008 to implement nationwide, Republican members of Congress could not negotiate with Democrats who were desperate to obtain their cooperation. Gerson doesn’t acknowledge any of this. He simply observes that his party continues to boycott any legislative changes to the law that might improve it and remains fixated on dismantling the law, even (or especially) if its refusal imposes hardship on the poor and sick. Why? Because the atmosphere is “poisoned.” How did it get poisoned? I dunno, it just did somehow.

Gerson’s insistence on taking Republican hatred of Obamacare as an atmospheric reality, rather than a decision subject to analysis, is the most telling pathology in his column. His column implies, but never explicitly argues, that Obamacare is bad. The Affordable Care Act has given access to health insurance to 20 million people, making it one of the great humanitarian reforms in American history. It has done so while coming in dramatically under budget — indeed, the federal government is spending less on health care now, even with 20 million more people insured, than it was projected to spend before Obamacare was passed into law. Uninsured rates have met their targets despite fanatical Republican resistance that includes a Medicaid boycott that has inflicted cruelty on the poorest and most vulnerable. Despite the fervent and repeated predictions by conservatives that Obamacare would cause medical inflation to rise, health-care inflation is running at historic lows.

Does Gerson believe the United States would be better off if Democrats had not passed Obamacare? He does not say. Does Gerson support the Republican boycott of the Medicaid expansion or any technical improvements to the law (which is routine with any major legislation)? He also does not say. This is because, to remain a party member in good standing, a Republican must pay fealty to certain truths, however untrue they may be. The party’s refusal to cooperate with Obama on any major issue, and its dogmatic insistence that Obamacare must be destroyed, is a sign of its intellectual rot. The GOP’s refusal to support the principle of universal health insurance makes it unique among major conservative parties anywhere in the world. And its extreme legislative tactics in the service of this principle are a defining fact of the Obama era. Even the sanest and most reasonable members of the party do not or will not question its central strategic and ideological imperatives. The transformation of the party of Dubya to the party of Trump is a fall, but the closer one looks at the party of Dubya, the shorter and more easily explainable it is.