A couple days ago, Donald Trump Jr., the elder Trump’s son and an ever-enthusiastic provocateur for his father’s campaign, tweeted this out:

It will not surprise you that people did not take kindly to the comparison. Quickly, the internet’s outrage machinery kicked into gear. Think pieces were published; tweets were tweeted; perhaps most interesting, the Intercept noted that the general expression Trump Jr. used dates back “at least to” Julius Streicher, the publisher of the notoriously anti-Semitic Der Stürmer newspaper, who was executed at Nuremberg for crimes against humanity, in 1946. Streicher, it turns out, made a pretty Trumpian statement about Jews in a children’s book he authored in 1938: “However they disguise themselves, or however friendly they try to be, affirming a thousand times their good intentions to us, one must not believe them. Jews they are and Jews they remain. For our Volk [people] they are poison.”

But wait! cried one corner of the internet. It’s hypocritical for liberals to get all lathered up about this, because online anti-rape activists, you see, used the exact same analogy. This is a reference to a graphic created by a comedian and Photoshop artist named Ben Greele back in 2014, during the aftermath of the Elliot Rodger shooting. 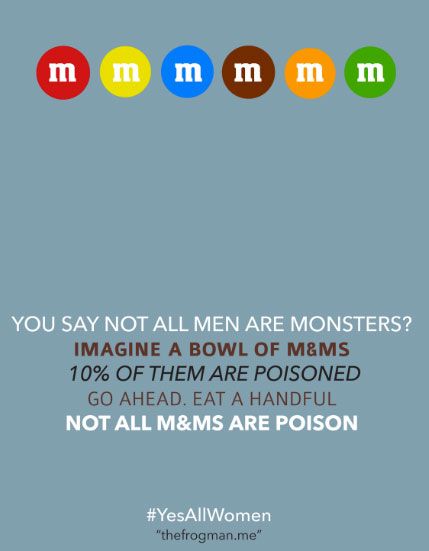 Checkmate, lieberals! Rekt. It’s such a powerful owning that Breitbart wrote it up triumphantly.

Except no — that’s dumb and makes no sense. The only thing this proves is how idiotic and acontextual internet arguments have gotten.

Trump Jr.’s statement came in a very particular context. He was shilling for his dad, who has said certain things about Muslims: namely, that we should exclude all billion-plus of the Muslims outside the U.S. from entering the country until we “figure out” terrorism and, presumably, how to fix it. He’s also said that we should murder the families of people — in this context, Muslims — who are involved in terrorism. The main reason people are upset about the Skittles tweet, then, is that it seems geared at further dehumanizing a group that is, in the U.S., quite vulnerable, and which Trump the elder has gone out of his way to paint, en masse, as monstrous murderers.

“But Greele did it too!” is a dumb rejoinder because the context is entirely different. If Greele had a long history of advocating that men be robbed of their civil rights, or that the families of men who are accused of rape be drone-murdered, then yes, this would be an alarming pattern. But even then, no one in a position of power is openly trying to enact such an openly misandrist agenda. It isn’t a thing that exists. That’s why, setting aside questions about the accuracy of the metaphor, it’s perfectly reasonable to get more upset at the Trump Jr. tweet than the Greele image, in much the same way you might get more upset at a senator using a racial slur than a random homeless guy doing so. Greele was just saying that a small handful of men rape women, and that this (obviously) causes a great deal of worry and pain and trauma among their victims.

Dearborn Muslims Protested ISIS, and You Can Probably Guess What Happened Next
How Social Autopsy Fell for GamerGate Trutherism

Also: Maybe Greele’s analogy was dumb, too, in its own way and its own context! That’s also a possibility. He was responding to the claim that not all men are rapists, a statement which, while objectively true, had taken on a particular reactionary connotation at the time of his M&M’s visual. His rebuttal was … yeah, but some men are rapists, like cuz what about poison M&Ms. Neither the initial claim, that not all men are rapists, nor the rebuttal, that poison M&Ms would be a bummer, actually does much to advance any sort of actual argument or conversation about rape or rape culture or rape victims, or anything else. This is characteristic of these sorts of online culture-war skirmishes, which seem to degenerate very quickly into cacophonies of good-guys-versus-bad-guys cartoonish sloganeering. It’s generally not a good sign when statements that are totally true — most men don’t rape people, on the one hand; some men do rape women, on the other — are taken as powerful signals of your underlying political commitments, and can get you in internet-trouble with certain people just for uttering them.

It’s all so dumb and exhausting, to be honest. When someone like Trump Jr. tweets something like this, we should be able to discuss the claim on its own, in the full light of context from which it arose (or, in this case, oozed). But “this other political group made a similar argument also involving candy” is, unfortunately, the level of intellectual firepower at which 2016 Twitter (and Breitbart) is operating.

THE FEED
8:00 a.m.
the power trip
the power trip
Maggie Haberman on How She Covers Trump Without Losing Her Mind
By Olivia Nuzzi
A conversation about her critics, Trump family feuds, and the one time he used a fake baby in a photo op.
10/5/2022
screen time
screen time
Elon Musk’s Incredible Shrinking Future
By John Herrman
He charmed his fans with visions of Mars and cool cars. But an “everything app” just sounds like a nightmare.
10/5/2022
kids these days
kids these days
The Whiny Grade-Grubbing NYU Students Have a Point
By Eric Levitz
It is too hard to become a doctor in the United States.

10/5/2022
poll position
poll position
Democrats Aren’t Laughing at Dr. Oz Anymore As Pennsylvania Race Tightens
By Ed Kilgore
Recent polls show the Pennsylvania Senate race between John Fetterman and Mehmet Oz — a must-win for both parties — is a toss-up.
10/5/2022
tremendous content
tremendous content
Bonkers Revelations From Maggie Haberman’s Trump Book, Ranked
By Margaret Hartmann
If you want more information on Trump being weird with toilets and belittling Jared Kushner, Confidence Man has you covered.
10/5/2022
early and often
early and often
Herschel Walker Can’t Keep His Abortion Story Straight
By Matt Stieb
First it was a “flat-out lie,” now it’s just an indiscretion.
10/5/2022
early and often
early and often
Justice Jackson’s Originalist Case for Racial Equality
By Ed Kilgore
Ketanji Brown Jackson didn’t buy Alabama’s argument that the 14th Amendment prohibits the state from following the Voting Rights Act.
10/5/2022
court appearances
court appearances
Decoding Elon Musk’s Legal Surrender
By Ankush Khardori
What was the strategy here?
10/5/2022
politics
politics
Herschel Walker’s Son Goes Nuclear on His ‘Lying’ Father
By Nia Prater
After a story about the candidate’s alleged payment for an abortion, Christian Walker went off in a series of tweets.
10/5/2022
the sports section
the sports section
Aaron Judge Is Even Better Than His Home Run Total
By Joe DeLessio
The Yankees slugger hit his 62nd homer, breaking a still-sacred baseball mark. He’s also having a pretty good season in other categories.
10/5/2022
games
games
There Is No Fixing This
By Will Leitch
Tua Tagovailoa’s ugly injury is the latest reminder that no policy change can excise brutality from the NFL.
10/5/2022
the money game
the money game
Mohamed El-Erian on the Looming Recession — and What He’s Doing With His Money
By Jen Wieczner
“I don’t know how to convey it, but we came very close to a financial accident in the U.K,” says the markets guru.
10/4/2022
early and often
early and often
GOP Strategy to Save Herschel Walker: Ignore His Son, Attack the Abortion Story
By Ed Kilgore
Republicans train their fire on the Daily Beast’s claim he paid for an abortion, not his son Christian’s more damaging allegations of domestic abuse.
10/4/2022
the money game
the money game
Did Elon Musk Give Up Because His Silicon Valley Friends Were Humiliated?
By Kevin T. Dugan
His monthslong legal odyssey to get out of buying Twitter at the original price of $54 a share appears to be over. The timing is interesting.
10/4/2022
early and often
early and often
Can Herschel Walker Survive the Implosion of His Heroic Image?
By Ed Kilgore
After a steady drip of negative stories, Walker has now been hit with dual bombshells: abortion allegations and attacks from his own son Christian.
10/4/2022
u.s. supreme court
u.s. supreme court
The Supreme Court Is Back and Ready to Do More Damage
By Ed Kilgore
If reproductive freedom was the major casualty of the last term of the Court, racial justice could be most at risk now.
10/3/2022
early and often
early and often
Why Trump Nicknamed Letitia James ‘Peekaboo’: 6 Theories
By Margaret Hartmann
There’s a lot of speculation about what Trump’s lazy nickname for the New York AG really means (but it’s probably just racist).
10/3/2022
tremendous content
tremendous content
Elon Musk Tries to End the War in Ukraine by Posting
By Matt Stieb
The serial entrepreneur tries on diplomacy with a Twitter poll.
10/3/2022
the money game
the money game
Kim Kardashian Just Paid a $1 Million Fine for Being a Crypto Grifter
By Jen Wieczner
It turns out that crypto influencing is not the same as influencing for skin-care products or makeup or bras.
10/3/2022
the money game
the money game
Why Is Everyone Freaking Out About Credit Suisse?
By Kevin T. Dugan
Wall Street is suddenly fearful about a Lehman Brothers–like disaster hitting the financial system — sparked by the European investment bank.
10/3/2022
the national interest
the national interest
Republican Senator on Trump’s Racist Rant: ‘I Hope No One Is Racist’
By Jonathan Chait
Unfortunately, Donald Trump is extremely racist.
10/3/2022
early and often
early and often
Trump Demanded a Government Shutdown and Nobody Noticed
By Ed Kilgore
His incendiary jab at Mitch McConnell distracted from a complaint about congressional Republicans not opting to destroy their midterm chances.
10/3/2022
war in ukraine
war in ukraine
Russia Doesn’t Exactly Know What Territory It Stole From Ukraine
By Matt Stieb
The Kremlin is still figuring out the borders of its newly annexed territory in eastern Ukraine, where Russian soldiers are getting pummeled.
10/3/2022
just asking questions
just asking questions
How There Will Be Blood Explains the Crumbling Global Economy
By Kevin T. Dugan
Think inflation is bad here? Brent Johnson predicted the global financial crisis we’re in, and he thinks it’s going to get much worse.
10/3/2022
the city politic
the city politic
The Horror That Continues to Haunt Our City
By Errol Louis
Treating New Yorkers with serious mental illness is one of the only ways we can prevent tragedies like the murder of FDNY Lt. Alison Russo-Elling.