In retrospect, it’s kind of crazy that even though celebrities like Kim Kardashian and Katy Perry had gotten their own mobile games, web-native celebrities like PewDiePie hadn’t. That changed this week with the release of Tuber Simulator, a new mobile game that lets you become a web star under the tutelage of the most popular YouTuber in the world.

Tuber Simulator has already proved so popular that it crashed the game’s servers after reaching No. 2 on the App Store charts (it was held off by the ever-present iTunes U app).

I tried Tuber Simulator and, because I am 6,000 years old and sleep in a coffin like a vampire, I found the game very boring. It’s fine? It’s fine. I will say this, the game does not do itself any favors by having the expressive gamer boy yell at you as soon as it loads. 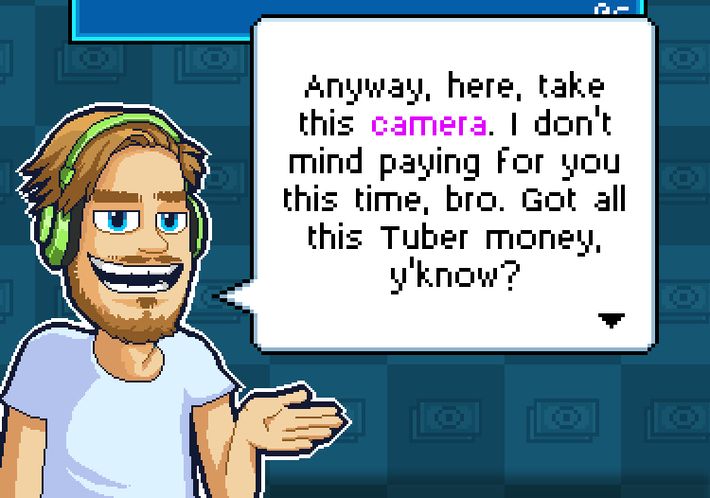 Tuber Simulator is one of those games where you click a bunch of menu options to start timers and then wait for those timers to end so you can click them again. Maybe the most well-known of these games is Tiny Tower.

The loop of Tuber Simulator is this: You are a Tuber (legalities prevent you from being a Y**T****) sitting in a room. You can buy furniture for the room, which you pay for by getting video views. You create videos by tapping on one of a few options with names like “Flushing while they shower DUBSTEP.” Creating a video starts a timer, and once that ticks down, you get currency with which to buy room customizations. Those things — rugs, chairs, accoutrements — also arrive via a timer. You can pay real money to speed up the timer. You can also upgrade a skill tree that lets you accrue views and fans and currency even faster. It’s a complex system of tapping through menus and starting a variety of different timers.

I don’t think there’s much else there. Like I said before, it’s fine. Games don’t need to be complicated. Fans of PewDiePie will enjoy hearing him yell and the game’s pixelated art style. They will play it on a bus and some of them will spend too much of their parents’ money on in-game currency.

Does the game accurately reflect what it’s like to be a YouTuber? I suspect it does. It’s kind of boring, and you just sit at your computer all day and check what’s trending and wait for stuff to upload. I feel like it might be more realistic if you had to also go to your normal 9-to-5 day job to, you know, pay rent, but otherwise, Tuber Simulator is as boring as the profession it depicts.