Who Is Palmer Luckey?

Palmer Luckey is the founder of Oculus, a subsidiary of Facebook, and the inventor of its main product, a virtual-reality headset known as the Oculus Rift. The Rift, which was released to the public this March, is probably the best-known and highest-profile VR headset, and arguably the piece of hardware that kicked off the current craze for virtual reality. And deservedly so: It was one of Kickstarter’s earliest and most visible successes, and the tech was so compelling that legendary video-game designer John Carmack left his company, iD, to become Oculus’s CTO.

So, Palmer Luckey is a tech-industry veteran with years of experience?

Absolutely not. Luckey, now 24, started developing the Oculus as a teenager. John Carmack described Oculus’s E3 2012 showing thusly: “This little shoe box that Palmer had taped together with two plastic lenses and a surplus screen was better than these super high-end displays that cost a hundred times as much.”

Two years later, noting the attention that Oculus had gotten on Kickstarter and from the gaming community, Facebook purchased the company for an astounding $2 billion, betting big on VR’s future. It also turned Luckey, who owned around a quarter of the company, into a multimillionaire. At the sale’s announcement, a vocal contingent of Kickstarter backers were livid, claiming that Luckey had sold out, losing his “started in a garage” street cred.

Ohhh, so he’s another one of these tech-bro rich kids?

Not … quite. He’s a much more interesting character than concurrent wunderkinds like Snapchat’s Evan Spiegel or Uber’s Travis Kalanick — less “bro” than, if we can use the term affectionately, dork. From Time’s 2015 profile of Luckey:

He was homeschooled, and though he did drop out of college, it was California State University, Long Beach, where he was majoring not in computer science but in journalism. He prefers shorts, and his feet are black because he doesn’t like wearing shoes, even outdoors. He doesn’t look like a guy who played Dungeons & Dragons so much as a character in Dungeons & Dragons. He’s a nerd from a different century, working on the problems of a different century. Palmer Luckey is a tinkerer.

Luckey now lives in the wealthy neighborhood of Atherton, near Facebook’s headquarters, with half a dozen or so friends on a property Luckey calls “The Commune.” They reportedly spend most of their time playing Super Smash Bros. and other games. Just to underline this: While Spiegel and Kalanick plot world domination from palatial estates and private jets, Palmer Luckey, who could buy dozens of properties, lives in a gamer commune with six roommates.

Time magazine … wasn’t that the one with the totally ridiculous cover?

You mean this one? 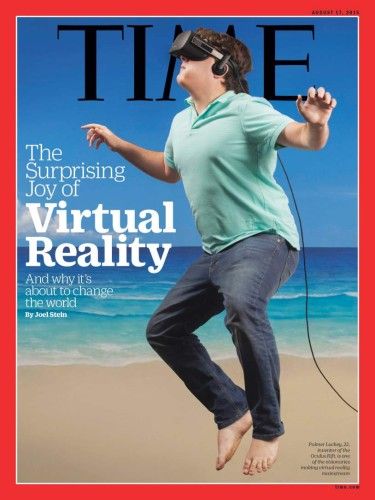 My contribution to the Palmer Luckey cover madness pic.twitter.com/ohRKTIPvHp

Why is Palmer Luckey back in the news?

Because he now has more money than sense or experience, Luckey threw some of his cash toward a nonprofit called Nimble America — a nonprofit, pro-Trump political organization that, according to its own literature, makes anti-Clinton memes. (To be clear: There is no hard evidence so far that Nimble America has made any memes or funded any trolls, though it exists, has money, and bought a billboard in Pittsburgh.)

Under the handle NimbleRichMan on Reddit, Luckey espoused the merits of a Trump presidency (many of the comments have since been deleted); he also attended a Trump rally in California last April.

This is a message from @PalmerLuckey, the founder of @Oculus. pic.twitter.com/CWlAA8ugMx

Luckey’s involvement with Nimble America was reported out by the Daily Beast. “Money is not my issue,” he told the website. “I thought it sounded like a real jolly good time.”

Wait — so Luckey is the second Facebook-affiliated rich tech founder to throw his weight behind Trump this year?

Yes. You’re thinking of early Facebook investor and PayPal founder Peter Thiel, who’s pledged his support to Donald Trump. But where Thiel has thrown his weight behind more traditional rich-person political activities like speaking at the RNC and pledging to be a delegate (and, uh, crushing an independent media company?), Luckey has explicitly associated himself with Trump’s alt-right internet contingent — the one posting images of cartoon frogs dressed as Nazis and throwing the word cuck around.

Does that mean Luckey is a Gamergater?

Well, probably! His girlfriend, a cosplay model and gamer who goes by Nikki Moxxi, certainly is; she sometimes cosplays as the ill-defined ethics movement/harassment campaign’s mascot, Vivian James. She’s also a prolific pro-Trump tweeter, though since the Luckey revelation her Twitter and other social-media accounts are now deactivated.

Why would a dorky but clearly intelligent 24-year-old decide to take political action on behalf of an obviously terrible candidate, in such a bizarre fashion?

Why have 22-year-old gamers across the country decided to throw their weight behind an incoherently reactionary movement like Gamergate and a regressive racist candidate like Trump? You could spend a lifetime trying to articulate what it is about video-game culture in 2016 that has transformed its love of trolling and absence of empathy into an efficient incubator for far-right goonery. But the other part of it is that we don’t really know what, if anything, Luckey was trying to accomplish. Other than a billboard in Pittsburgh, it’s not clear what Nimble America has actually produced; Luckey has expressed less full-throated support of Trump than a kind of stilted excitement about stirring the pot. In a way, he exemplifies the central weirdness at the heart of Trump’s young and savvy alt-right support group. Is he doing it to actually help Trump? Is he just doing it for the lulz, like the old-school gamer trolls of 4chan? Is it some odd combination of both?

Nope, and they likely won’t. Policing employee political actions is a bad move for any large corporation. Plus: Luckey already got his payday. What is firing him really going to do except give him more time to spend thousands of dollars on meme creation?

THE FEED
8:00 a.m.
early and often
early and often
The Data-Driven Strategy Behind Democrats’ State-Level Success in 2022
By Eric Levitz
The president’s party almost always loses state-level power in midterm elections. Here’s how Democrats bucked that trend last year.
1/26/2023
what we know
what we know
5 Memphis Cops Arrested for Murder of Tyre Nichols
By Chas Danner
Footage of Nichols’s arrest and “savage” beating will be made public Friday.
1/26/2023
the talented mr. santos
the talented mr. santos
Here’s Every Single Lie Told by George Santos
By Matt Stieb
Navigating the many exaggerations and falsehoods of New York’s newest representative.

1/26/2023
early and often
early and often
Brian Kemp for President Makes a Lot of Sense
By Ed Kilgore
Georgia’s governor doesn’t have the warmest personality. But in trouncing both Donald Trump and Stacey Abrams, he showed world-class political chops.
1/26/2023
master of the garden
master of the garden
James Dolan on Blacklisting His Enemies: I Have Rights, Too
By Matt Stieb
The MSG owner defended his use of facial recognition to ban lawyers who have sued him in a highly entertaining local-TV rant.
1/26/2023
screen time
screen time
How Much Does Unbanning Trump Really Matter?
By John Herrman
On the internet, you can never really go back home.
1/26/2023
2024 senate races
2024 senate races
Adam Schiff Runs for Senate on the Enemies He’s Made
By Ed Kilgore
Trump and Republicans inadvertently elevated a mild-mannered moderate who is taking his shot at Dianne Feinstein’s seat.
1/26/2023
just asking questions
just asking questions
Why the College Rankings Are Getting Less and Less Relevant
By Benjamin Hart
Former college president and longtime rankings critic Colin Diver on U.S. News & World Report’s moment of reckoning.
1/26/2023
the national interest
the national interest
Ron DeSantis’s Long War on Black Political Power
By Jonathan Chait
It’s not just a “culture war” — it’s about political representation.
1/26/2023
chinese democracy
chinese democracy
The Radical, Lonely, Suddenly Shocking Life of Wang Juntao
By Christopher Beam
After half a century of resisting the Chinese Communist Party, a dissident confronts murder and espionage in Queens.
1/25/2023
early and often
early and often
Marjorie Taylor Greene’s Desperate Plan to Be Trump’s Vice-President
By Ed Kilgore
MTG just got her first committee assignments and can’t control her mouth, but she might be on Trump’s shortlist. He’d be nuts to pick her.
1/25/2023
tremendous content
tremendous content
Why Jeff Bezos and Lauren Sánchez Are Relationship Goals
By Margaret Hartmann
Think they’re just disgustingly wealthy? Think again! Sánchez’s ‘Wall Street Journal’ Q&A reveals they’re hardworking, humble, and totally adorable!
1/25/2023
early and often
early and often
Trump’s Terrified 2024 Rivals Show It’s His Race to Lose
By Ed Kilgore
Republicans’ reluctance to enter the presidential race is telling, and the longer they wait, the more likely Trump’s renomination becomes.
1/25/2023
wyd
wyd
Trump Has Reportedly Discovered the Modern Magic of Texting
By Matt Stieb
Welcome to 2023, sir.
1/25/2023
sports
sports
Something’s Still Not Quite Right at the Baseball Hall of Fame
By Ben Jacobs
Barry Bonds and Roger Clemens are finally off the ballot, but the steroid era’s influence lingers.
1/25/2023
war in ukraine
war in ukraine
U.S. Tanks Are on Their Way to Fight Russians in Ukraine
By Matt Stieb
It may be Washington’s biggest escalation, though Biden downplayed the move.
1/25/2023
politics
politics
New Yorkers Will Get to Vote on Their Own Equal-Rights Amendment
By Nia Prater
Lawmakers passed legislation that would add new protection classes to the state’s constitution.
1/25/2023
early and often
early and often
Pat Buchanan, a Vindicated Extremist, Packs It In
By Ed Kilgore
A man who once seemed marginalized is now a MAGA prophet who is retiring with a lot of malign accomplishments.
1/25/2023
poll positioin
poll positioin
Why Republicans Won’t Name Their Debt-Ceiling Demands
By Ed Kilgore
Polls show the public agrees with the GOP on the need for spending cuts — but only if it keeps its proposals abstract.
1/25/2023
the system
the system
The Uprising That Ran Out
By Zak Cheney-Rice
The death of Keenan Anderson marks the end of an era.
1/24/2023
early and often
early and often
Centrist House Democrats Picked a Bad Time to Have an Identity Crisis
By Ed Kilgore
With Congress closely divided, the Blue Dog Coalition could be having a moment. Instead, it’s falling apart over a proposed name change.
1/24/2023
tremendous content
tremendous content
Did Trump Really Teach ‘Rocket Man’ Kim Jong-un About Elton John?
By Margaret Hartmann
Trump and Pompeo’s claims about their 2018 meeting with the North Korean dictator don’t totally check out. But it’s still a good story.
1/24/2023
artificial intelligence
artificial intelligence
AI Journalist Plagiarized More Than a High-School Student
By Benjamin Hart
Sometimes robots commit very human errors.
1/24/2023
everybody wants some
everybody wants some
Mike Pence Also Had Classified Documents at His House
By Matt Stieb
At this point, which former executive-branch leaders haven’t done this?
1/24/2023
the talented mr. santos
the talented mr. santos
There Is One Thing George Santos Didn’t Lie About
By Nia Prater
One of New York’s first COVID-19 cases is now a U.S. representative.