What makes for a good subway smartphone game? Why did Candy Crush Saga rule every train line from the A to the Z in 2014? I think there’s a couple of key factors.

1. You need to be able to pick it up and put it down, quickly.

Glance up and realize this is where you need to transfer? Drop your phone into your pocket or bag without worry. Conversely, if you’re only riding for three stops, you should still be able to jump back in the game and do something interesting.

2. You gotta be able to play it one-handed.

When you’re pressed into the human Jell-O mold that is a train at crush-load capacity, it’s nice to be able to grab a handhold and still play while someone digs into your pancreas with their backpack.

You want a game engrossing enough you can deal with a sick-passenger delay. But you don’t want a game that’ll suck you in so much that you look up and realize you’ve missed 17 stops are now at the New York Aquarium (which, hey, not the end of the world — pretty fish!).

Reigns, from developer Nerial, nails all three. The game can basically be thought of as Tinder for ruling a kingdom, with a twist thrown in that you’re also cursed by the Devil. (Which is also like Tinder, I think? I’m not 100 percent up-to-date on my dating apps.)

The game play is simple enough to pick up within two minutes. Each turn you get presented a card, usually someone in your court asking for something, whether it’s a new tower for the army or permission from the church to burn witches. Swipe right to say yes, swipe left to say no. 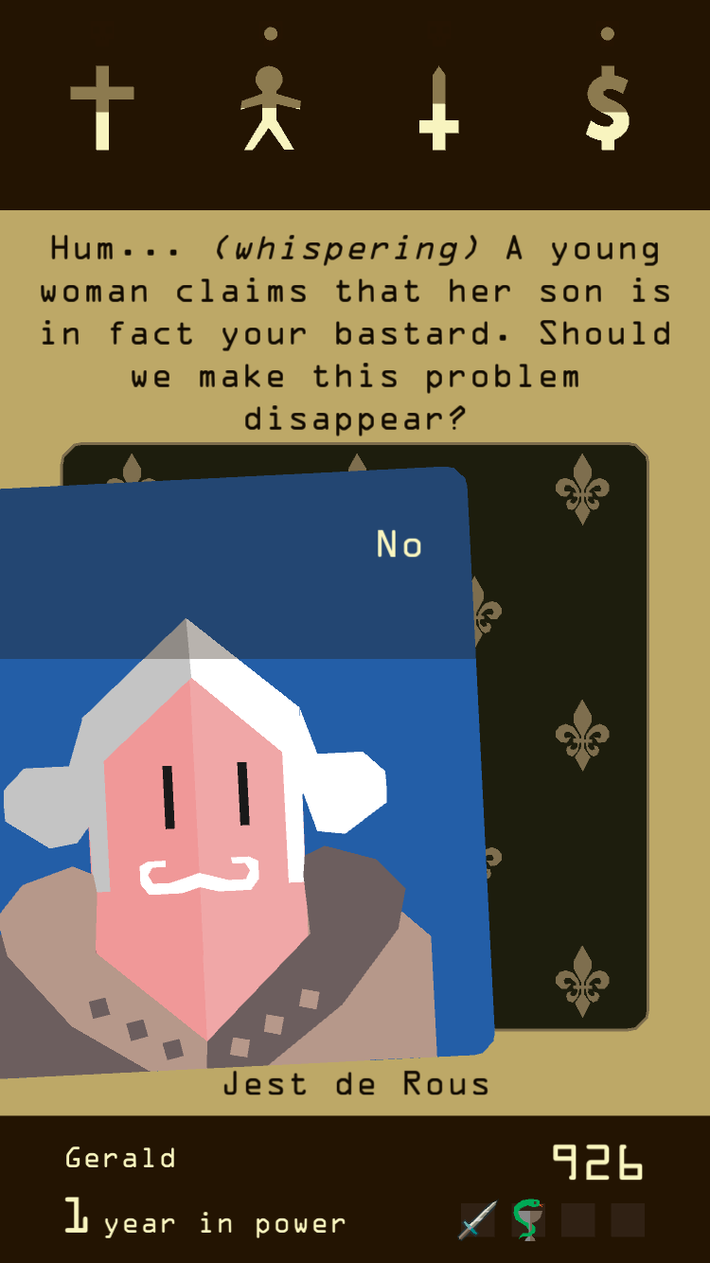 Above you, you have four differing meters — one for the church, one for your people, one for the army, and one for your treasury — that can go up or down depending on how you choose. Say yes to a tower for the army, and your army grows more powerful while your treasury goes down. Say no to burning witches and the power of the church goes down while the happiness of the people goes up.

The trick of the game, however, is that you can’t let any meter either get depleted or completely full, or you’ll die or get deposed. If you get too poor, the oligarchs will take over, but if you get too rich, you’ll throw a massive banquet where you’ll choke to death, but nobody will notice because they’re too hammered. Meanwhile, if you only focus on your money and allow the church to grow too weak, pagans will rip you apart (really should have let them burn those witches!). 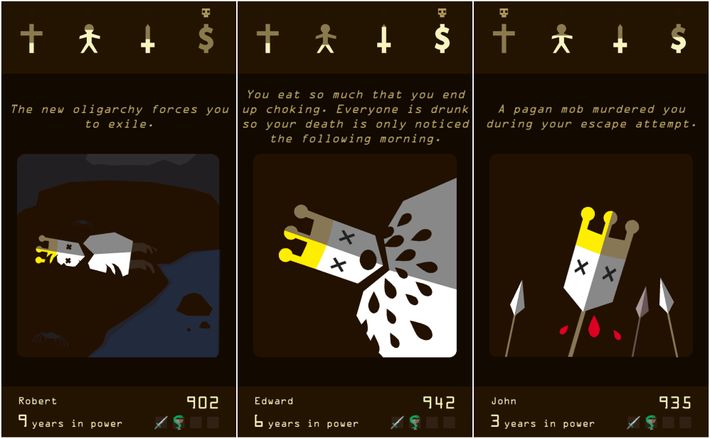 But the game doesn’t end or reset when you die. You just start up as another ruler. Along the way you’ll unmask conspiracies, go off exploring (and usually dying in) dungeons, have affairs, meddle in magic, and start to discover why exactly the devil has cursed you. Every 666 years the Devil will show up, and you’ll have a chance to maybe get out from his clutches.

The charm of the game is that the day-to-day decisions are a fun balancing act — if the army is growing too strong and you fear a coup from your generals, you can send them off to fight someone else, but be careful that move doesn’t also deplete your treasury and find you dead at the hands of oligarchs — while still having a longer narrative arc that slowly unfolds. Over 1,400 years of ruling the kingdom, you’ll slowly start to piece together what to do and not to do (pro gamer strat: Don’t let your doctor take on the job of the executioner), and see the outlines of a story play itself out. You will die, over and over and over again, which is upsetting the first few times, and then becomes old hat. 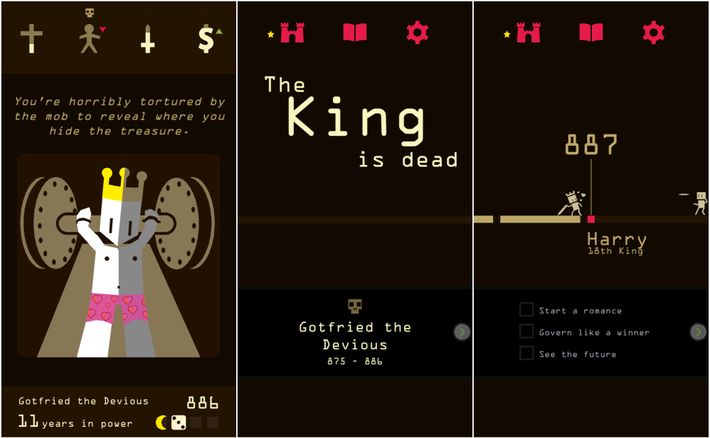 But mostly, it’s great for making your daily subway ride a little bit easier. Swipe left, swipe right, watch your kingdom rise and fall, execute a traitor or two, lose an arm to a wolf, or get killed by your bastard son, and soon enough you’re either dead again or at your destination. It’s $2.99 on iOS or Android, and only about half as violent as reading the New York Post.