Hillary Clinton’s campaign manager found out about her “email scandal” when everyone else did.

At one point, Podesta asked Mook if he’d had “any idea of the depth of this story.”

“Nope,” Mook replied. “We brought up the existence of emails in reserach [sic] this summer but were told that everything was taken care of.”

“Why didn’t they get this stuff out like 18 months ago? So crazy,” Tanden wrote to Podesta, before concluding, “I guess I know the answer. They wanted to get away with it.”

The revelation of their candidate’s ill-fated attempt at secrecy inspired some aides to push for radical transparency.

Longtime Clinton adviser Philippe Reines argued that the campaign should spend less time brainstorming a “good answer” for why the candidate used a private email server, and let the innocence of the actual messages speak for themselves. 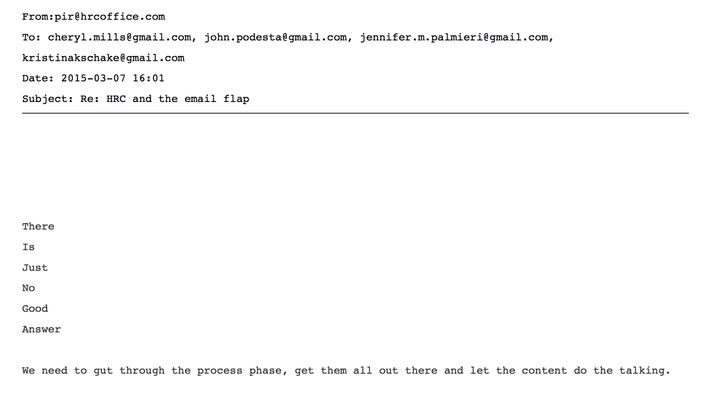 Reines’s vision, developed with communications director Jennifer Palmieri, was for Clinton to lay her cards on the table at the very beginning of her campaign, releasing all of her emails and paid Wall Street speeches in a one-day news dump that Reines dubbed “Transparency Day.”

“Jen, I’ll let you download the conversation you and I had about the concept of ‘Transparency Day,’” Reines wrote in the email to senior staff. “But I took the opportunity to revisit my long held belief that releasing the paid speeches transcripts were a gimme and contrary to a year ago she completely agreed.”

Reines suggested that Clinton might already be onboard with the idea, writing “EINC (Emailer in Chief) is in a very good place about all of this,”

The campaign may have even had a specific date in mind — Reines notes that an adverse weather forecast would help minimize opportunities for nettlesome questions at the State Department.

“We also luck out that the snow day means no State briefing,” he wrote. “So Marie won’t get shellacked on details.”