Last week, Paul Ryan announced that he would no longer defend Donald Trump — and gave the Republican caucus in the House permission to do the same.

Trump voiced his disappointment with the Speaker many times in the ensuing days, going so far as to accuse Ryan of supporting “opened borders, amnesty, and bad budgets.”

Paul Ryan should spend more time on balancing the budget, jobs and illegal immigration and not waste his time on fighting Republican nominee

Paul Ryan, a man who doesn't know how to win (including failed run four years ago), must start focusing on the budget, military, vets etc.

Those attacks may have done little to boost Trump’s standing in the presidential race, but they did quite a bit to diminish Ryan’s standing among GOP voters. 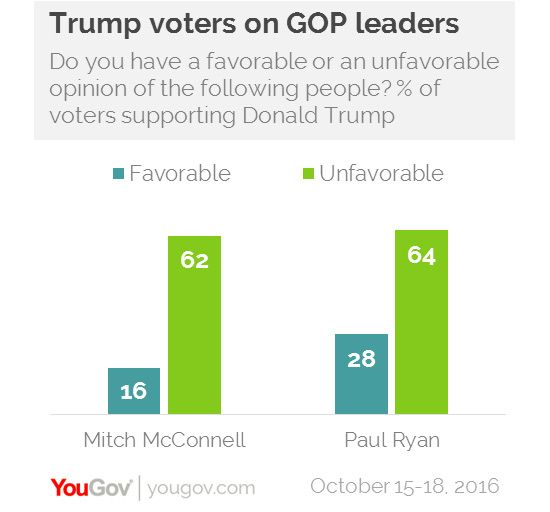 The fact that Ryan’s numbers moved so dramatically in seven days suggests that these figures are malleable. And the Speaker could reasonably hope that his party’s base will take a dimmer view of its 2016 nominee after what looks to be a disappointing Election Day for red America. (People like nominees who weren’t defeated.)

Except: The whole point of Trump’s attack on Ryan was to pin blame for the mogul’s (likely) loss on a traitorous Republican Establishment. It seems entirely possible that Trump has both the megaphone and the credibility with a significant chunk of the GOP base to make that narrative stick, even after November.

If it does, the implications for governance in the United States could be disastrous. As Vox’s Matt Yglesias notes:

To sell a compromise to your base, it’s important to be trusted heading into the negotiation. That way when you walk out of the room with a deal and say, “look, guys, I know this isn’t everything we want, but it’s the best deal we could get,” you are credible and can convince people.

But when most of your constituents hate you at the start, then almost any compromise is bound to be seen as a sellout. That’s a recipe for more gridlock.

What’s more, the most likely outcome of this year’s House elections is a smaller, even more radical Republican majority. If Paul Ryan stays on as Speaker, his job will basically be to drive up his own unfavorable rating with the GOP base, by working with Democrats to keep the country running.

If Ryan decides that isn’t a job he’s interested in — or else, decides (yet again) to put his own political interest above principle, and joins his colleagues in government-shutdown gimmicks — Hillary Clinton’s presidency could get very nerve-wracking, very fast.

THE FEED
9/20/2021
immigration
immigration
Border Patrol Agent Uses Whip to Chase Haitian Migrants Into Mexico
By Matt Stieb
The alleged incident near the large encampment of Haitian migrants at the border in Texas is being investigated by Homeland Security.
9/20/2021
politics
politics
Ex-Attorney on House Arrest Might Blow Up Texas Abortion Law
By Ed Kilgore
He just wants some of that sweet $10,000 bounty, and he might have just triggered the legal review of SB 8 that proponents were trying to avoid.
9/20/2021
politics
politics
No, Gavin Newsom Isn’t Going to Sprint to the White House
By Ed Kilgore
The California governor deserves a lot of credit for crushing the recall. But he wouldn’t have been in such a jam without his own perceived arrogance.

Pfizer says COVID-19 vaccine works in kids ages 5 to 11
—AP
9/20/2021
silicon valley
silicon valley
Book Excerpt: Peter Thiel’s Untold College Stories
By Max Chafkin
His ideology dominates Silicon Valley. It began to form when he was an angry young man.
9/19/2021
delta variant
delta variant
7-Day Average of U.S. COVID Deaths Passes 2,000 for the First Time Since March 1
By Matt Stieb
Almost 45,000 Americans have died in the last 28 days, as the Delta variant continues to sweep through the nation.
9/19/2021
politics
politics
Madison Cawthorn Once Said He Was ‘Always’ Armed With Knife
By Olivia Nuzzi
Last week, the congressman claimed ignorance about the allegation he brought a knife into a school. In January, he said he always had one on him.
9/19/2021
books
books
The Banality of Bonkers
By Ben Jacobs
Bob Woodward and Robert Costa’s new book on the transition of power from Trump to Biden offers plenty of new details but little surprise.
9/19/2021
the sports section
the sports section
The 2021 Mets Season As Told Through 15 Steve Cohen Tweets
By Joe DeLessio
The team’s owner has learned in public that rebuilding a benighted franchise isn’t so easy.
9/18/2021
politics
politics
Protest Over Capitol Riot Arrests a Nonevent
By Chas Danner
Media and police far outnumbered actual protesters on the National Mall on Saturday.
9/18/2021
elections of 2021
elections of 2021
Republicans Now Eager to Spin the Election in Virginia
By Ed Kilgore
After the California recall didn’t go so well for Republicans, their focus is on wealthy Virginia gubernatorial candidate Glenn Youngkin.
9/18/2021
pandemic
pandemic
‘I Did Not Want My Children to Be Home Again’
By Nia Prater
After more than a year of Zoom school, NYC kids returned to classrooms, much to the relief of parents and teachers.
9/17/2021
crime
crime
Robert Durst Found Guilty of Murdering Friend
By Chas Danner
The real-estate heir was convicted of first-degree murder for killing Susan Berman in 2000 in an attempt to conceal how he had murdered his wife.
9/17/2021
booster shots
booster shots
FDA Panel Recommends Booster Shots for Those 65 and Over, But Not Everyone
By Paola Rosa-Aquino and Chas Danner
The panel’s vote against authorizing third shots of Pfizer’s COVID vaccine for those 16 and over may derail the Biden administration’s booster plan.
9/17/2021
afghanistan
afghanistan
U.S. Admits Deadly Kabul Drone Strike Was ‘Horrible Mistake’
By Chas Danner
The air strike killed ten civilians, including seven children — not an ISIS-K car bomber.
9/17/2021
california dreaming
california dreaming
Post-Recall, California Governor Gavin Newsom’s Next Big Win Is Against NIMBYs
By Alissa Walker
California also says “no” to single-family-only zoning.
9/17/2021
politics
politics
Should Democrats Gamble on Immigration Reform in 2021?
By Ed Kilgore
If the parliamentarian lets Democrats put immigration reform in the reconciliation bill, they’ll have to choose between principle and midterm fears.
9/17/2021
politics
politics
Republican Trump Critic Quits Congress As Cult of January 6 Grows
By Ed Kilgore
Trump is changing the Republican narrative of the Capitol Riot from an outrage in which he was a bystander to a patriotic triumph.
9/17/2021
infrastructure
infrastructure
Climate Change Is Putting More Poop in New York’s Waters
By Lauren Vespoli
A crappy side effect of all this rain.
9/17/2021
the national interest
the national interest
Centrist Democrats Won’t Even Let Biden Crack Down on Tax Cheats
By Jonathan Chait
The Democratic agenda is getting eaten alive by lobbyists.
9/17/2021
explainer
explainer
Will America Finally Get National Paid Family Leave?
By Eric Levitz
What to expect when you’re expecting the U.S. Congress to pass a paid family-leave law in 2021.