The air is crisp right now, as autumn delivers that brief respite between the hell swamp that is summer and the snow-slush suffering of winter. But nothing gold can stay, Ponyboy. And nothing will prep you for winter better than Jérôme Bodin’s game Frost, out now for iPhone and Android. In it, you play a band of survivors trying to live through a postapocalyptic winter, where you mainly have to worry about scavenging for food, keeping enough of your people alive, and fighting off the occasional wolf pack or cannibal (or, sometimes, becoming a cannibal yourself). 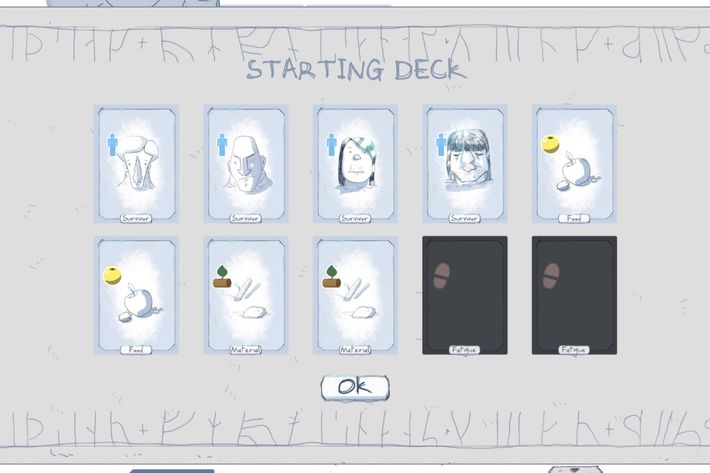 The mechanics for this are an admixture of solitaire and a very, very simplified version of deck-building games like Hearthstone or Dominion. Your goal is simple: Make it to the refuge, traversing various regions to get there. Each region will require some combination of food, wood, or a few survivors to traverse. You start out with some supplies and survivors, but the heart of the game is working to build up your starting deck of ten cards by either sending out survivors to gather supplies (and possibly dying in the process) or buying specialized tool cards that can generate more of what you need to make it through the frozen wastes. 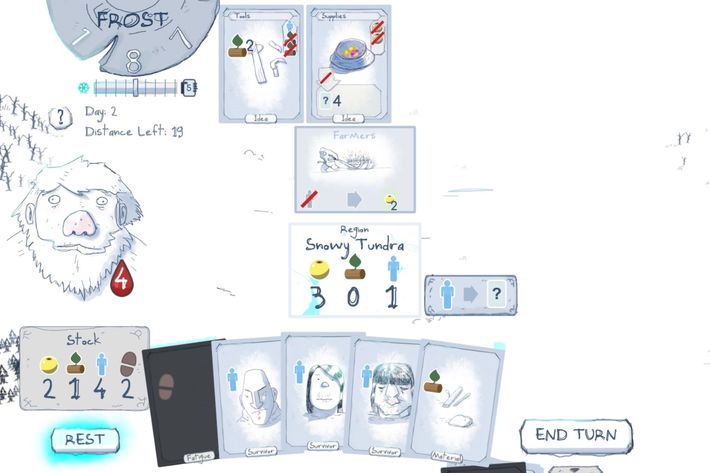 If your hand of cards sucks — you’ve got plenty of survivors, but what you really need is a spear — you can always hit “end turn” and get a reshuffle. But you’re also dealing with a countdown timer in the form of the rapidly approaching wall of frost you’re trying to outrun. Spend too long trying to traverse a bit of tundra and you’ll end up just as dead as you would if you got gunned down by a survivalist in the woods. Along the way, you’ll make tough choices — use wood for a spear now to fend off attackers, or save it for gathering more supplies? Send out survivors to possibly find food, or just pick one unlucky person to serve as a meal for everyone else?

It’s a harsh game, and you’ll end up a frozen corpse a lot more often than you reach safety. But each round usually unlocks an extra specialized card or two to help out for your next play-through. It’s a great subway game: good enough to suck you in, quick enough that you’ll probably finish a game before hitting your stop, and methodical enough that if you need to put it down to make a transfer or figure out how many more stops you have until you hit home, it’s not a big deal.

The game’s mechanics are satisfying, with strategic planning helping in the long term but the randomness of luck of the draw dictating the pace enough to make things tense. But it’s the presentation that has me coming back again and again. Unlike many smartphone games that go in for a candy-apple sheen of color and movement, Frost uses a wildly pared-down color palette, with the whiteness of the snow dominating everything. Bodin’s confidently loose hand-drawn graphics make the game feel like a particularly well-done adaptation of an Image or Fantagraphics comic book — all highly reminiscent of Nicolas De Crécy’s beautiful book Glacial Period. The minimalist sound design, mainly the low sound of wind, a single flute, and the percussive sound of things scraping together and people gasping for breath, sounds a bit like a Nordic take on Akira’s soundtrack. 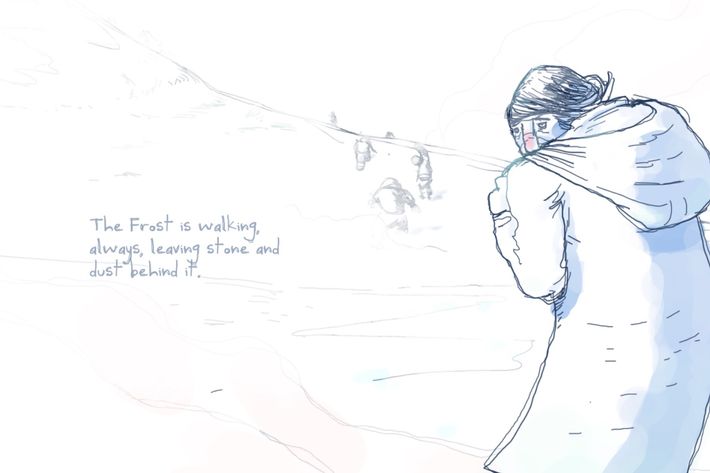 You may eventually scrape up against the outer limits of what the game has to offer — Frost is good for short play sessions, but lacks the complexity needed to really sink its hooks into you for longer periods of time. But Frost’s finely drawn grimness so thoroughly conveys the sense of trudging through snow endlessly, it’ll keep you coming back — and wondering whether it may be time to replace your winter jacket for something a bit warmer.

+Comments Leave a Comment
Frost: A Smartphone Subway Game to Get You Ready for Winter