Photo: Trump Is Not a Team Player/Nuisance Committee

For months, it’s seemed like no anti-Trump arguments have been able to connect to the internet-native, meme-happy, post-Gamergate voters of the alt-right, which hopes to ride the Trump train straight to the White House. Finally, though, one political-action committee is putting Trump in terms they can understand: video-game references.

A new — and, frankly, convincing — website called Trump Is Not a Team Player explains Trump’s actions on the campaign trail in terms of gaming. He blames his teammates; he accuses his opponents of cheating; he claims that his controller — sorry, debate mic — is broken.

The website — created by Nuisance Committee, a PAC funded by the popular party game Cards Against Humanity — is beautifully illustrated with cartoons showing Trump as various heroes from the insanely popular multiplayer shooter Overwatch. 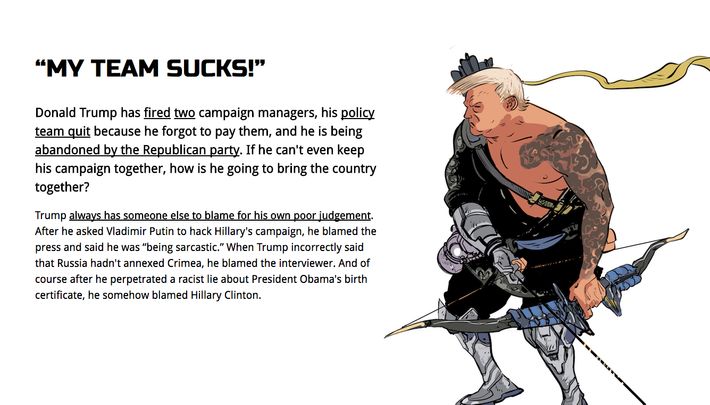 But its biggest outlay is a billboard in Florida that reads “Trump mains Hanzo and complains about team comp.”

Here's a cleaner photo of that billboard. pic.twitter.com/ZccA5eJil2

To Overwatch players, “Trump mains Hanzo and complains about team comp” is both highly insulting and completely fitting. To non-players, it’s incomprehensible. Allow us to try to explain.

Overwatch is a class-based multiplayer game where different characters have different abilities, strengths, and weaknesses, so it’s important that a team has a diverse lineup (“team comp”). Depending on their style, some players decide to focus on getting really good playing as one character (also known as “maining”).

Maining Hanzo is derided in certain Overwatch circles because players who gravitate toward the character don’t contribute to the overall team. The objective of a normal Overwatch map is to move a payload from one end of an arena to the other — not to kill the most people, as one might in a game like Halo.

Hanzo is a ranged character, meaning that he normally stands apart from the frenzy and snipes from a distance. Reddit’s main Overwatch forum actually has an entire thread about why players who main Hanzo suck.

I think it mostly stems from him being a ranged character, on top of being among the most “anime style” heroes. He is a popular pick for people going for the “weebu look”. So low level people pick him and don’t use him effectively. Add to the fact that he is ranged, you now have a person who can’t aim and will never be on the objective.

Now for an enemy hanzo, it stems from the fact that he will just spam his limp dick arrows or scatter shot (no aim kill) from a screen away and get kills. Also, appearing to be playing for kills and not the objective.

I think it’s because a bunch of fucking retards pick hanzo and don’t fucking switch. Then they brag about how they have 2 gold medals whilst they’re contributing nothing to the actual fucking game.

Maining a character in Overwatch is counterproductive to the game’s design, which requires the ability to recalibrate a team’s lineup in order to better fight opponents.

In other words, in the popular imagination, Hanzo mains are selfish newbies who only look out for themselves, don’t really understand the point of the game, and refuse to play in the proper spirit. Sounds familiar, right?