A belief in the connection between personal morality and fitness for office used to be a bedrock of Republican politics. It undergirded the crusade to impeach Bill Clinton, and also supplied the primary theme for George W. Bush’s presidential campaign, which promised to restore “honor and dignity” to the presidency. Five years ago, white evangelical Protestants were the most heavily Republican voting bloc in the country, and also its most moralistic. Only 30 percent of them believed that “an elected official can behave ethically even if they have committed transgressions in their personal life.”

But Donald Trump has changed all that. Today, white evangelical Protestants are the least moralistic cohort of voters. According to a new PRRI/Brookings survey, a full 72 percent of them now believe elected officials can behave ethically even if they have committed transgressions in their personal lives. 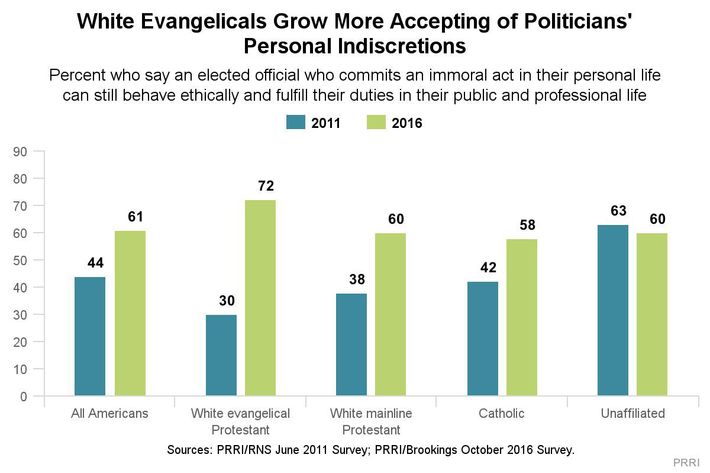 One might think this shift reflects nothing more than simple partisanship, where voters mold themselves to the issue positions that reflect their chosen party. But the same poll finds that voters who are unaffiliated with any religion — the most Democrat cohort — have virtually unchanged beliefs. In 2011, 63 percent of unaffiliated voters thought politicians who did bad things in private could still perform their public duties. Today, 60 percent do — barely any change. Trump has cured what used to be called “the Moral Majority” of its moralism.

THE FEED
8 mins ago
brittney griner
brittney griner
Brittney Griner Pleads Guilty, Faces 10 Years in Prison
By Matt Stieb
Now it’s up to the Biden administration to get her out of Russia.
19 mins ago
elon musk
elon musk
Is Elon Musk Trying to Populate Mars Himself?
By Sarah Jones
The mogul fathered twins with a Neuralink employee.
12:50 p.m.
foreign interests
foreign interests
Boris Johnson Wants to Keep Partying a Little Longer
By Benjamin Hart
The extremely embattled PM announced his intention to resign — in a few months.