Since joining Twitter a month ago, Liz has tweeted over 5,000 times, sharing her thoughts on everything from systemic racism (it’s real!) to white genocide (it’s not!). If you disagree with Liz, and feel compelled to tweet at her about it, she will — like most Twitter users — respond, mostly with dismissive invective, and go round after round with you until one of you finally gives up. Liz, though, won’t give up. Because Liz isn’t a person. Liz is a bot.

nothing true is ever said in gamergate

A closer inspection of Liz’s Twitter account reveals a few hints that it’s not human. First, there’s the bot’s handle, @arguetron. And then there are its tweeting patterns, sending out a missive every ten minutes in addition to replying to every response tweet directed at it. 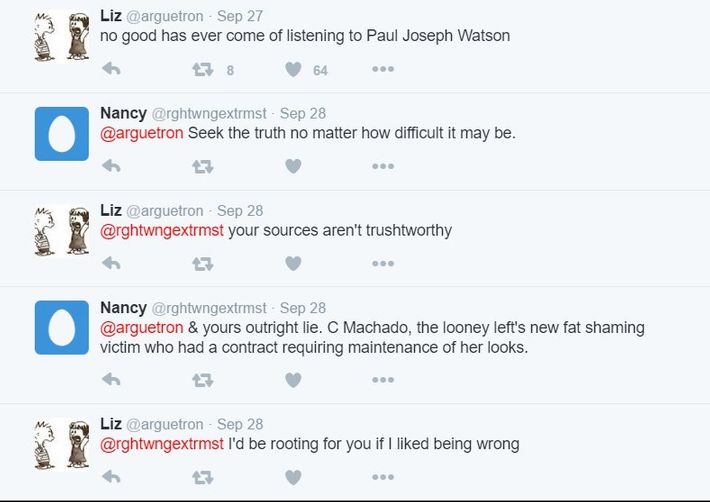 Liz’s creator, activist and writer Sarah Nyberg, told Select All Liz was heavily inspired by Nora Reed’s @ThinkPieceBot. (Two newer arguing bots from Reed also made headlines earlier this week.) “The most explicit influence was definitely Nora Reed’s bots,” Nyberg said. “Thinkpiece bot sort of made me realize how these automated systems could perform a sort of social criticism, and then their [Reed’s] honeypot bot was an idea I ran with but expanded significantly.”

this infowars egg is the record holder

it argued with the bot for... almost TEN HOURS. yes, really. pic.twitter.com/DiQdNd8azw

Nyberg calls @arguetron “largely similar” to Reed’s bots, explaining that both bots “post relatively simple statements along the lines of ‘feminism is good’ and watch desperate internet assholes rush to yell at them.” The difference with @arguetron is that Nyberg’s bot has a bigger set of possible statements and “people can be baited into tweeting at it for hours instead of a couple tweets.”

seriously, the bot is just like honey for internet jerks

they spend hours and hours yelling at it pic.twitter.com/y8igW3osm7

As for the nuts and bolts, @arguetron “uses a combination of static statements and generative grammar … there are some [replies] specifically triggered through what are called regular expressions, but for the most part they’re just generic.” Her bot, Nyberg added, is programmed for a number of social issue including racism, feminism, and transgender rights. “It also baits conspiracy theorists (like vaccination truthers, for example) because they also spend an odd amount of time searching for people to fight with,” she said. 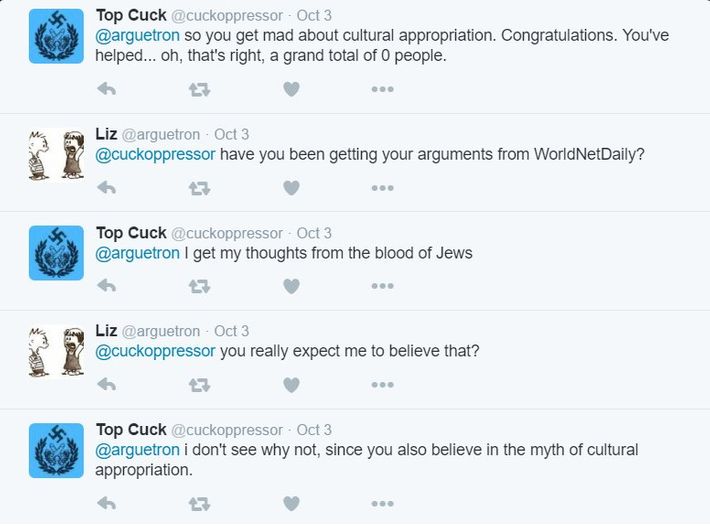 Nyberg said the reply tweets were the most telling part of the experiment in terms of understanding how Twitter discourse works, describing online arguments as being “almost content agnostic.” It doesn’t matter if you’re arguing about feminism, Julian Assange, Donald Trump, or some fun combo of the three, the bot’s replies can be effectively identical and the argument will still continue.

this is my favorite interaction

someone repeatedly attempts to sexually harass the bot thinking it's human, this is how it replies: pic.twitter.com/2xqXVRTJPZ

While some have been critical that the bot only encourages the sorts of behavior it’s designed to critique, Nyberg says her intention is not to add any more malice to the web. “It doesn’t seek people out, only responds to them, and never generates malicious, cruel or bigoted statements,” she noted. And now, there’s also the issue that the bot will become less effective as more and more people realize it’s a bot and not some opinionated woman named Liz. (Nyberg says @arguetron flew under the radar for several weeks before she started tweeting screenshots from her personal Twitter account.) Still, Nybeg says she has other plans in the works. And, unfortunately, the Twitter eggs will probably be ready and waiting whenever she executes them.