Mike Pence spent much of his vice-presidential debate not defending his running mate, or even attacking Hillary Clinton, but instead indicting the Obama administration’s allegedly failed policies. Tim Kaine devoted scant attention to the defense, and Republicans walked away concluding that they had seen a glimpse of an alternate world in which their party’s winning course had not been diverted into the ditch by their evil clown nominee. “If you had a normal, professional, Republican politician on the stage, prosecuting conservative arguments, who actually knows what he’s talking about,” said former Republican adviser and staunch Trump critic Dan Senor, “we would actually be winning this election.” It is not only Republicans who say this; a version of this belief has sunk deeply into the conventional wisdom. (I appeared on the show where Senor said this, and he, Charlie Rose, and Mike Allen all agreed that this was a “change election” that Republicans were only failing to win because of Trump’s unique unfitness for office.)

@SallyAlbright @CNNPolitics Jon, this is a change election when 70% of country believes we are off on wrong track. Just different.

wrong track was high before trump arrived on scene. If Kasich was nominee, GOP would be winning fairly big.

In reality, Kaine’s lack of interest in defending Obama should not be mistaken for an inability to defend him. The president remains popular among the public — today’s CNN poll registering a 55 percent approval rating, the highest of his second term, being the latest evidence. Some conservatives have dismissed Obama’s rising popularity as a mere response to Trump, but this is wrong, too — Obama’s approval ratings also rose during the 2012 cycle. Elections seem to activate the support of disenchanted partisans. The cyclical fall-off of support among partisan voters does not indicate any real opportunity for Republicans, since those voters naturally return to the fold during an election.

The most ubiquitous piece of data to support the “change election” narrative is the very high “right track/wrong track number,” which was cited on the Charlie Rose panel and has become the favorite conservative measure of public opinion since Obama’s approval ratings hit 50 percent. But the right track/wrong track number has no predictive value of election outcomes. In the 1970s, when the public grew disenchanted with public institutions in the wake of Vietnam and Watergate, wrong-track numbers structurally rose and have stayed mostly high with few exceptions. “Wrong track” voters include large numbers of liberal Democrats who support the administration and feel frustrated the Republican Congress has blocked its proposals. As other, closer analysis has found, most Americans think their side is losing the partisan fight, which explains why so many believe the country is on the wrong track, but does not indicate any desire by frustrated liberals to hand the White House to the GOP.

The conviction that America is yearning to change parties in the White House is also undergirded by somewhat more amorphous evidence of working-class discontent — support for Trump among the white working class, generalized despair in rural and Rust Belt areas, and so on. In one of the short exchanges where Kaine defended Obama’s record, he cited 15 million new jobs, lower poverty, and rising median income. Pence focused instead on localized depressed areas. “You — honestly, senator, you can roll out the numbers and the sunny side, but I got to tell you, people in Scranton know different,” he said. “People in Fort Wayne, Indiana, know different.”

It is true that the long-term decline in manufacturing employment has had devastating impacts on communities in towns like Scranton and Fort Wayne. It is telling that Pence had to rely on localized pain in communities suffering from trends dating back decades. On the whole, American consumer confidence is strong, hitting the highest level since the recession: 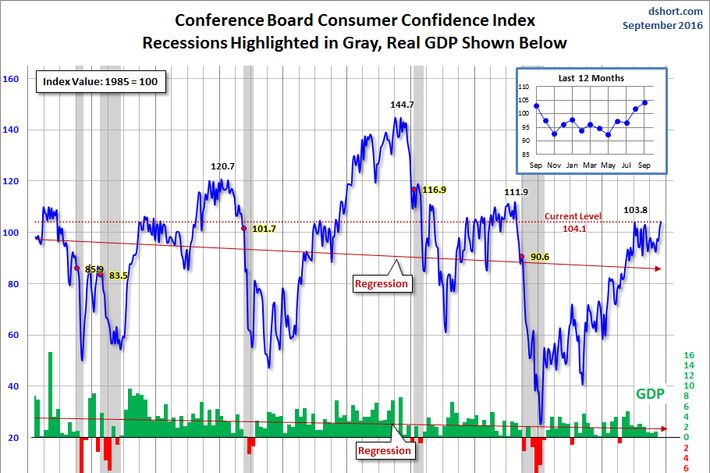 It is true that the extraordinary unpopularity of the Republican nominee has made the election much harder than it could have been. But this overlooks another peculiarity of the election, which is the extraordinary unpopularity of the Democratic nominee. One can argue about why Hillary Clinton became the second-most-unpopular major-party nominee in history. (I attribute it to a combination of her and her husband’s mistakes, brutal attacks on her character and authenticity during the Democratic primary, and sexism that treats her ambitions as more unusual and contemptuous than those of male politicians.) Whatever the cause, the impact is quite real. Yes, if the Democrats had a highly unpopular nominee and the Republicans didn’t, Republicans might be winning. And yes, there are a lot of disparate feelings of unhappiness among the public, many coming from the left. But that doesn’t indicate some natural desire by the electorate to give Republicans control of government.

The “change election” myth will take on lasting power after the election. It will fuel the belief by the party Establishment that its choices were right — the maniacal opposition to everything Obama proposed, the obsession with cutting taxes for the rich, and so on — but their electoral vindication was merely derailed by the flukish nomination of a demagogue. If not for Trump, America was ready to give Republicans a chance to reverse the Obama years. The reality is that the best way to measure public approval for an elected official is to ask people if they approve of that official’s job performance. Trump has become a mechanism for Republicans to avoid coming to grips with the fact that the electorate that rebuked their party twice when it elected and reelected Obama has not reconsidered its position.

+Comments Leave a Comment
The Myth of the ‘Change Election’

THE FEED
12:18 p.m.
cryptocurrencies
cryptocurrencies
Why Dogecoin, the Joke Crypto, Is Forcing People to Take It Seriously
By Jen Wieczner
Despite the fact its founders designed it to be devoid of value, the meme bitcoin-copycat has now reached Wall Street-like proportions.
12:00 p.m.
business
business
Philanthropic Monsters
By Sarah Jones
A new book shows how the Sackler family behind the opioid epidemic tried to buy immortality. They almost succeeded.
9:00 a.m.
voting rights
voting rights
Jim Crow’s Ominous Lessons on Voter Suppression
By Ed Kilgore
Republicans bristle at talk of Jim Crow 2.0, but there are clear echoes of the era of Black disenfranchisement in their drive for voting restrictions.

Justice Department sues Trump ally Roger Stone, alleging millions in unpaid taxes
—NBC News
4/16/2021
immigration
immigration
Biden Keeps Trump’s Record-Low Refugee-Admissions Cap, Breaking Pledge
By Chas Danner
Following backlash over the reversal, the White House later signaled it would still raise the cap this fiscal year, but not as high as it had pledged.
4/16/2021
cancel culture
cancel culture
Ted Cruz Wants to Cancel John Boehner
By Ed Kilgore
The great champion of liberty against “cancel culture” is raising money from people who want to watch him burn Boehner’s book.
4/16/2021
georgia election law
georgia election law
Can Suppressing Votes Save Brian Kemp?
By Ed Kilgore
Kemp is using Georgia’s new election law to heal a breach with Trump-loving conservatives but so far has drawn only a gadfly primary opponent.
4/16/2021
housing
housing
To ‘Build Back Better,’ America Must Build More Housing
By Eric Levitz
A historic housing shortage threatens to hamper the post-COVID recovery.
4/16/2021
side effects
side effects
Why the Second COVID Shot Makes You Miserable
By Jeff Wise
Unpleasant side effects are in part a consequence of lightning-quick vaccine development.
4/16/2021
foreign interests
foreign interests
Withdrawing From Afghanistan Is Biden’s Least Bad Option
By Jonah Shepp
The pullout of U.S. troops will likely have tragic consequences for Afghans, but remaining indefinitely offers no clear path to victory.
4/16/2021
politics
politics
5 Revelations From John Boehner’s New Memoir
By Jonann Brady
In On the House, the former Speaker praises Nancy Pelosi’s “killer instinct,” unloads on Ted Cruz, and claims Mark Meadows once begged on his knees.
4/16/2021
intelligencer chats
intelligencer chats
What the Mainstreaming of Crypto Means for Normies
By Benjamin Hart and Jen Wieczner
Digital currencies are likely to become more intertwined with everyday life.
4/16/2021
politics
politics
The GOP’s Barebones America
By Sarah Jones
Behind a narrow definition of infrastructure lies a narrow vision for the country.
4/16/2021
mass shootings
mass shootings
8 Killed in Shooting at FedEx Warehouse in Indianapolis
By Margaret Hartmann
At least five other people had been hospitalized with injuries, including one in critical condition. Police said the gunman killed himself.
4/16/2021
capitol hill
capitol hill
Chuck Schumer Has Changed
By Gabriel Debenedetti
Why is the former “angry centrist” pushing his party to go bigger, bolder, and more progressive?
4/15/2021
nyc mayoral race
nyc mayoral race
The New York City Mayoral Race Is Starting to Get Petty
By Matt Stieb
In the nation’s largest city, leading mayoral candidates Andrew Yang and Eric Adams squabbled on Thursday over New York officials’ parking habits.
4/15/2021
vision 2020
vision 2020
Yes, Geographical Polarization Was a Big Deal in 2016 and 2020
By Ed Kilgore
New data shows that the suburban swings to the left and rural swings to the right are consistent with the intuitive trends in the last two elections.
4/15/2021
crime
crime
Why Do Tasers Look Like Guns Anyway?
By James D. Walsh
Daunte Wright’s killer is not the first law-enforcement officer to confuse the two, often with deadly consequences.
4/15/2021
police shootings
police shootings
Video Shows Chicago Police Shooting and Killing 13-Year-Old With His Hands Up
By Intelligencer Staff
The Chicago agency investigating police shootings released the graphic footage of an officer shooting Adam Toledo, whose hands were raised.
4/15/2021
infrastructure
infrastructure
GOP to Biden: Raise Taxes on Our Rural Base, Not Coastal Elites
By Eric Levitz
Biden wants to fund infrastructure with taxes on the (largely coastal) corporate elite. Republicans insist on soaking their own base instead.
4/15/2021
coronavirus
coronavirus
Israel Drops COVID Rule Requiring Masks Outdoors
By Matt Stieb
It’s a milestone for one of the nations to roll out the vaccine the fastest, though vaccination rates in Palestine lag significantly.
4/15/2021
extremism
extremism
McConnell Howls About Court-packing Just As Pelosi Nixes It
By Ed Kilgore
It’s a good example of how smears of the opposing party can run abruptly into countervailing reality.
4/15/2021
minnesota
minnesota
Is This a Community?
By Zak Cheney-Rice
Despite their rhetoric, the Brooklyn Center police have an open disinterest in actual community with city residents.
4/15/2021
climate change
climate change
New York Magazine’s David Wallace-Wells Testifies Before the Senate on Climate
By Paola Rosa-Aquino
Author of The Uninhabitable Earth on the cost of inaction.
4/15/2021

“The routine surgery was successful, and he is expected to fully recover and return to normal activity in the coming days,” Pence’s office says.
—@NBCNews
4/15/2021
crime
crime
Derek Chauvin Invokes Fifth Amendment, Won’t Testify
By Nia Prater and Margaret Hartmann
The defense has rested and closing arguments are set for Monday.
4/15/2021
the economy
the economy
The Biden Boom Has Begun
By Eric Levitz
Jobless claims are falling, factory production is rising, and retail sales are skyrocketing as Biden’s stimulus kicks in.